Georgia health professionals have administered 4 million doses of the COVID-19 vaccine to residents.

The state passed 3 million shots as of March 19, according to Gov. Brian Kemp, meaning the state distributed 1 million shots in 15 days.

Still, Georgia has the lowest percentage of residents fully vaccinated out of all 50 states, according to NPR. Georgia’s coming in at 13.4% vaccinated.

The vaccine is free and available to any Georgian who is 16 or older. Residents can click here to find a nearby COVID-19 vaccination site.

Or sign up for a shot at one of the state’s mass vaccination sites.

On to other area news:

Is the state of Georgia being boycotted?

Last week, Major League Baseball announced that its All-Star Game would no longer be held in Atlanta. The decision was made so quickly that the league hadn’t yet selected a second location.

MLB has since announced that the game will be played in Denver, Colo.

Some social media users have called for a boycott of major Georgia-based corporations like Coca-Cola, Delta and Home Depot for not taking a stand against the new voting law.

Members of the film industry are also speaking out against SB 202, with the Writers Guild of America insinuating that members of Hollywood would avoid the state for future projects.

“Together, we stand in opposition to all efforts to suppress the vote, including this regressive new law,” WGA wrote in a statement. “If Georgia wants to benefit from the thousands of good jobs our industry brings to the state, it cannot attack the democratic rights of its own people.”

Georgians – and all Americans – should fully understand what the MLB's knee-jerk decision means: cancel culture and woke political activists are coming for every aspect of your life, sports included. If the left doesn’t agree with you, facts and the truth do not matter. 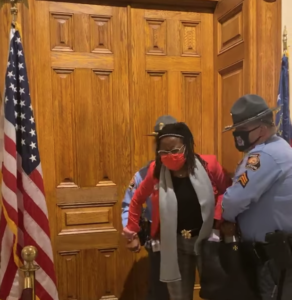 Rep. Park Cannon is arrested and escorted out of the Georgia Capitol. (Credit: Tamara Stevens)

Fulton County District Attorney Fani Willis has announced that she will not pursue charges against Rep. Park Cannon and that the case has been dropped.

In March, Cannon was arrested in the Georgia Capitol for repeatedly knocking on the door where Gov. Kemp was signing SB 202 into law.

The arrest was caught on camera, and the footage left many outraged by how the elected official was treated.

Some recalled how those who stormed the U.S. Capitol in January were treated, compared to how the officers treated Cannon, a Black woman.

“While some of Representative Cannon’s colleagues and the police officers involved may have found her behavior annoying, such sentiment does not justify a presentment to a grand jury of the allegations in the arrest warrants or any other felony charges,” Willis’ office said in a statement.

While glad that the charges were dropped, Cannon’s attorney Gerald A. Griggs said she should never have been arrested, and the two would explore their legal options.

“We will not live in fear, and we will not be controlled,” Cannon said regarding her arrest. “We have a right to our future and a right to our freedom. We will come together and continue fighting white supremacy in all its forms.”

Throughout the pandemic, folks are constantly told to wash their hands and keep a bottle of sanitizer handy. But that task is out of the question for those living on the street.

While most were taking shelter, Terrence and Cecilia Lester of Love Beyond Walls knew that something had to be done for Atlanta’s homeless population, and quickly.

The pair created Love Sinks In, an initiative to create and distribute portable sanitation units carrying 5 gallons of water and soap.

Love Sinks In has placed 51 units under Atlanta bridges, in parks and other places where unhoused people gather.

The program has found success, and Love Sinks In can be found in 52 cities around the country, according to NBC.

The project is founded on the idea that “social distancing doesn’t mean social disregard,” their website states. 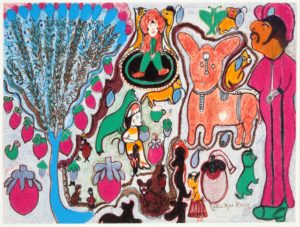 The High Museum of Art’s collection of Southern self-taught art is set for expansion.

The museum just received 47 pieces of art as gifts from Atlanta collectors Harvie and Charles Abney.

The sculptures, paintings and drawings were created by celebrated artists, including Howard Finster, Lonnie Holley, Ronald Lockett and Minnie Evans.

“Without question, this gift underscores the international importance and distinction of our folk and self-taught collection – in particular, by further highlighting the remarkable contributions of Southern artists,” Rand Suffolk of the High said.

The virtual conference centers on the changing economic climate, emerging hurdles, and how minority-owned businesses can pivot after dismal pandemic.

Starting next week, The Atlanta Business League will conduct a five-part series on rethinking business models.

Entitled “Saving, Sustaining, and Scaling Minority Businesses,” the congress will show Atlanta-area businesses how they can adapt, thrive and meet their goals during the global pandemic.

Topics will include doing business in the public sector, innovation and capitalization.

The public programs will happen throughout April and May.

Find out more and register here for the Congress on the State of Black Business in Metro Atlanta.

Wesley McMullan, president and CEO of Federal Home Loan Bank of Atlanta, has announced his retirement after 33 years with the bank.

Kirk Malmberg has been appointed to replace McMullan, effective May 28.

The bank has awarded about $6.6 billion in affordable housing funds, aiding over 957,000 households, according to a press release.

Atlanta Mayor Keisha Lance Bottoms has openly opposed state Senate Bill 202, a lightning rod of a bill that will make it harder for some people to vote in the next election compared to the 2020 election. Gov. Kemp recently signed it into law.

The mayor doesn’t have the authority to alter the law, but Bottoms hopes to “mitigate” its impact on her constituents.

In an executive order, Bottoms directed the city’s chief equity officer to create a plan to train employees and educate the public about voting processes, locations and general access information.

“As Mayor of Atlanta, I have a moral obligation to do all in my power to ensure that our sacred right to vote is protected,” she wrote in a statement.

Just as elections have consequences, so do the actions of those who are elected. Unfortunately, the removal of the @MLB All Star game from GA is likely the 1st of many dominoes to fall, until the unnecessary barriers put in place to restrict access to the ballot box are removed.