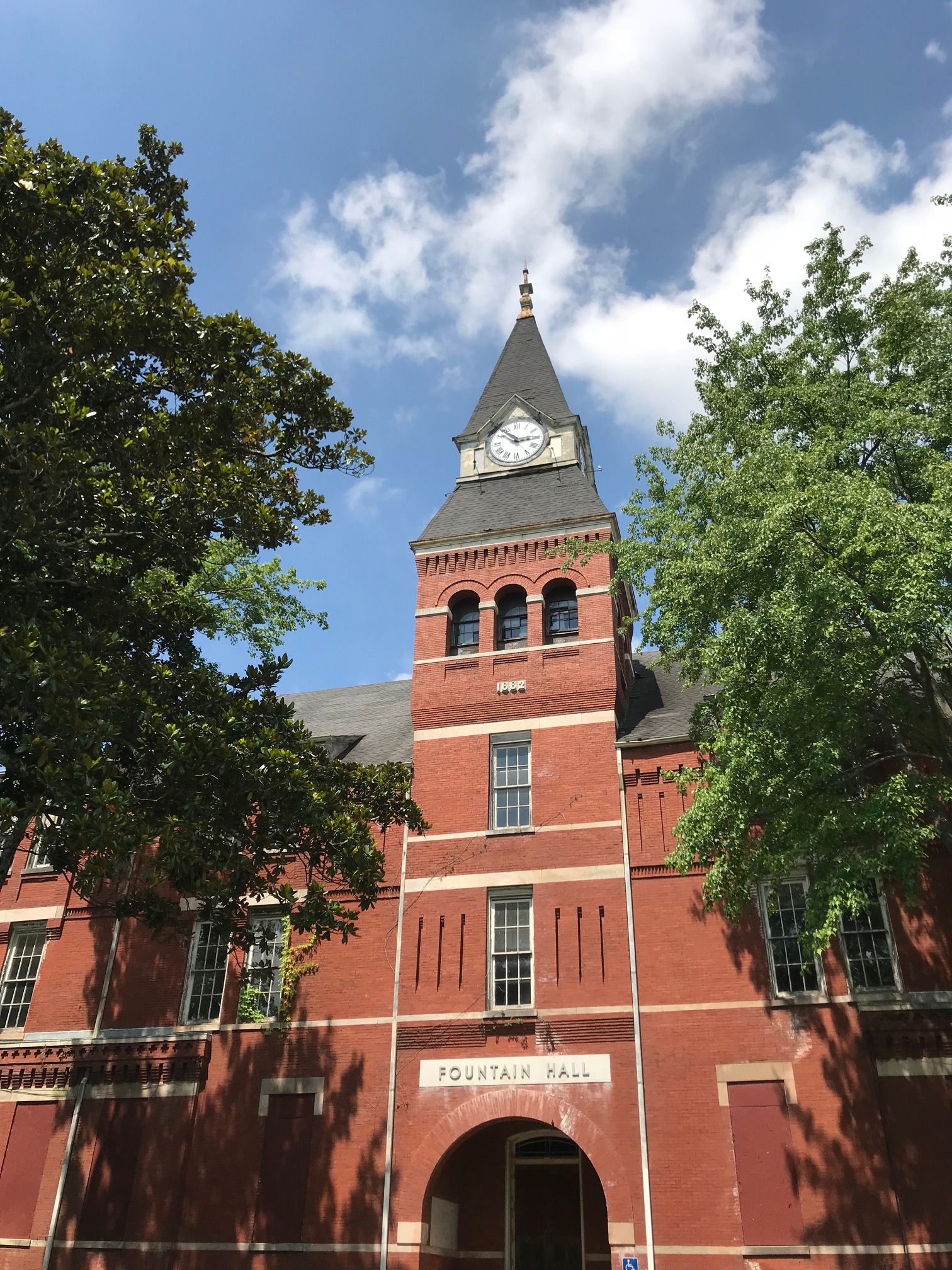 Most Worshipful Prince Hall Grand Lodge of Georgia and Order of Eastern Shore members can now get a degree at Morris Brown College at little cost. (Photo by Kelly Jordan)

Atlanta Mayor Andre Dickens has recently dropped the city-wide mask mandate that has been in place for most of the pandemic. The decision comes after the CDC updated its suggestions, marking Fulton and DeKalb County as “low-risk” areas.

Atlanta Public Schools and the City Schools of Decatur have also updated their guidelines to a mask-optional policy while indoors. Depending on the school system, some students may need to wear a mask on the school bus. Click here to find more COVID-19 information based on your county.

On to other recent city news: 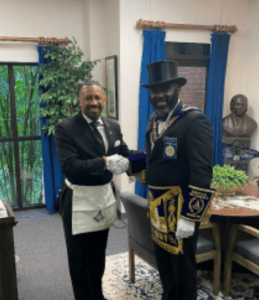 On Tuesday, Morris Brown College (MBC) announced a new partnership with the Most Worshipful Prince Hall Grand Lodge of Georgia to offer it and Order of Eastern Shore members the opportunity to complete their college education at little cost.

“Through this partnership, all eligible financially active members in Georgia will receive automatic admission to MBC to major in programs such as business, psychology, music, hospitality, general studies and esports,” said MBC president, Dr. Kevin James.

Established in 1866, Prince Hall Freemasonry is the oldest and largest predominantly African American fraternity with over 300,000 initiated members.

“This partnership with MBC is right on time,” said Grand Master Corey Shackleford, Sr. He added that education is the root of many of their endeavors which makes this a meaningful partnership.

James, who is also a member of the fraternity, also announced that MBC was recently reinstated to participate in the Federal Financial Aid Program administered by the U.S. Department of Education. This comes after MBC received accreditation candidacy from the Transnational Association of Chrisitan Colleges and Schools.

“The institution is now a viable option to everyone as we are historically a haven for all hungry souls,” said James.

The Alpharetta-based Pencor Construction is leading the building’s renovation. (Photo courtesy of City of Refuge)

City of Refuge, a faith-based organization providing resources for those in crisis, broke ground on its second affordable housing project on Wednesday, March 2.

The 345, formerly the Danzig Motel, will soon become a 31-unit community in the city’s Westside to support Black men — particularly military veterans, residents returning from incarceration and men ages 18 to 24.

“For decades, Atlanta’s Westside has been forgotten and left in the dark. It’s time for the deserving residents to have something they are proud of — a community they can be excited to call home,” City of Refuge Founder and CEO Bruce Deel said in a press release. “As the area becomes more attractive to developers, it is imperative that we provide current and future residents with opportunities to thrive.”

City of Refuge offers health services, housing, job training and youth development programs for residents of the Westside, a neighborhood where nearly 40 percent of residents live below the federal poverty level. 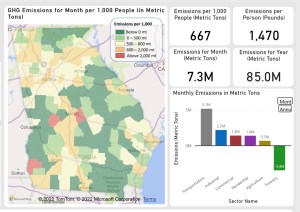 The new greenhouse gas tracker released by Drawdown Georgia shows users the source of emissions at the state and county levels.

The tracker was developed by William Drummond, of Georgia Tech, in conjunction with scientists at Tech and the University of Georgia.

The tool provides snapshots that include specific sources of emissions in each of Georgia’s 159 counties. The emissions are measured by sectors including transportation, electricity, industry, agriculture and buildings. It also offers data regarding the carbon sequestration by trees, according to a statement by Drawdown Georgia.

“The information powering our Tracker comes from publicly available datasets, primarily from federal agencies such as the Department of Energy, the Department of Transportation, and the Environmental Protection Agency,” Drummond said in the statement. “Statewide emissions data is converted to county values using various local indicator variables, such as population and housing characteristics from the Census Bureau’s American Community Survey.” 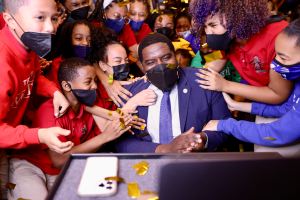 President Joe Biden selected Junior Bernadin, the Academy’s dean of students and IT director, and 117 others for the Presidential Awards for Excellence in Science, Mathematics and Engineering Mentoring.

Over the years, Bernadin and the Academy team have helped train nearly 100,000 educators on ways to increase student engagement and prosperity.

Bernadin is believed to be the first awardee of Haitian-American descent. He has received other accolades for his work with students and fellow educators, including making the 40 Under 40 list on the Atlanta Business Chronicle and Georgia Trend Magazine.

“I am honored to have the privilege of representing the best STEM mentors in the nation who continuously invest in the lives of both students and teachers. As a Haitian-American born in Little Haiti, this prestigious honor is more than just an award,” Bernadin said in a press release. “It is an opportunity to share best STEM practices with educators worldwide and show my students that representation matters in the STEM field.”

Buyers will have an opportunity to purchase chairs, tables, shelving, bookcases, desks and more on the following times and dates:

Masks are optional, but only a limited number of shoppers will be allowed in the building at one time. Inventory is on a first come first serve basis.

Patrons are responsible for transporting their own purchases. 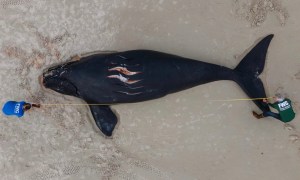 The calf of North American right whale Infinity was struck and killed by a sport fishing boat in 2021. (Photo by Tucker Joenz/Florida FWC, taken under NOAA permit 18786, via GNDR.)

“Fins and blood in the water” — that was the report from an occupant of a sport fishing boat that struck and killed a whale calf and wounded its mother off the Florida coast on Feb. 12, 2021.

The death of the North Atlantic right whale calf and the mother, Infinity, was widely reported at the time. Now details of the collision and near-sinking of the boat have been reported by the Wildlife Resources Division of Georgia’s Department of Natural Resources.

The captain’s story unfolds as could be expected. The boat was heading into the St. Augustine inlet after a day of wahoo fishing. The About Time’s twin 1,000-horsepower motors were pushing the 54-foot sportfisher at about 24 mph. The collision stopped the boat, holed the hull enough for incoming seawater to nearly sink it, killed the calf and injured the mother.

The full story is available here. 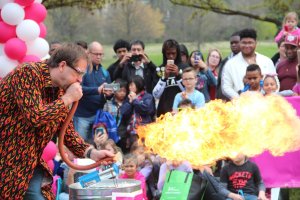 Atlanta Science Festival kicks off in one week

The ninth Atlanta Science Festival, running from March 12 to 26, will host over 100 in-person and virtual activities. The events will include nature walks, animal encounters, hands-on experiments and science-themed performances.

Some events are free, and others come with a small fee.

The two-week-long science celebration will close with the March 26 Exploration Expo, where Piedmont Park will be packed with interactive booths and live presentations.

“Today, science is more relevant than ever,” said Meisa Salaita, executive co-director of Science ATL — the architects of the Atlanta Science Festival. “And just as science evolves, our Festival continues to grow and expand in ways we never thought possible.”

Click here to check out the programming for the upcoming Atlanta Science Festival.