The Atlanta Braves won the World Series for the first time since 1995. (Photo by Kelly Jordan)

Forty-nine years ago this week, Andrew Young was elected as Georgia’s second-ever Black congressman and ultimately served three terms, according to Today in Georgia History. But his story doesn’t stop there. He was appointed as an ambassador to the United Nations by then-President Jimmy Carter and later served two terms as Atlanta mayor. Young is regarded as a living legend in Atlanta.

On to other news around the city and metro area:

The win heard from Houston to Atlanta

During the World Series, you could feel Atlanta bursting with excitement, so when they won on Tuesday, to say folks were elated is an understatement.

The Braves beat the Houston Astros 4-2, making it the team’s first World Series win since 1995.

“We’ve had so many ups and downs this year, and for us to be world champions, that is awesome to hear,” First Baseman Freddie Freeman told NBC News after the game.

“I couldn’t be happier to do it with this group of guys,” said Pitcher Max Fried, who lasted six innings, giving up four hits and no runs. He is credited with taking the Braves to victory.

Join the celebration on Friday, Nov. 5, with the Braves’ parade in downtown Atlanta and Cobb County. The event will wrap up with a concert from Ludacris and Big Boi. Click here to find more information about Friday’s parade. 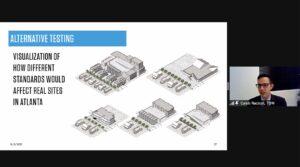 A rendering shows various densities on the same property. (Image from atlzoning.com)

Atlanta started the process of updating its zoning code in a webinar Wednesday. The event was the first of about 40 meetings planned as a new zoning code is created over the next few years.

This planned rewrite of zoning codes is to be based on the comprehensive development plan approved Oct. 28 by the Atlanta City Council. Zoning controls the types of developments allowed on land uses that are established by the CDP.

Atlanta Planning Commissioner Tim Keane said in introductory remarks that the zoning revision will enable Atlanta residents to shape the future development of the city.

At Wednesday’s event, consultants led by the Atlanta firm TSW introduced the methodology and process that’s to be followed. Three webinars are scheduled this year to provide additional details and allow for public comment. For more information, click here. 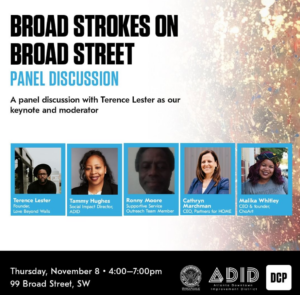 Visit the Atlanta Department of City Planning’s website to learn more about the event.

Atlanta’s newest art exhibit, Broad Strokes on Broad Street, is now showing at Atlanta City Studios at 99 Broad Street. The exhibit is presented by the Atlanta Department of City Planning and is open to the public until Dec. 7. The exhibit features work by human rights activist José Awo that advocates for the unhoused.

Guests should expect a multimedia experience that combines painting installation and videos about this nationwide issue. All proceeds from the exhibition will go to CaringWorks, a local agency dedicated to ending homelessness by providing comprehensive services and resources to its clients.

“My desire is to provide a voice for the voiceless,” Awo said. “I am hopeful, we will begin to recognize community and our shared humanity.”

Last month, voting rights organization Fair Fight announced they would be working with RIP Medical Debt to eliminate millions of dollars in unpaid medical expenses. The nonprofit is now giving over $210 million to residents in Georgia, Alabama, Mississippi, Louisiana and Arizona.

One in five American households struggle to pay their medical debt and the problem swelled during the COVID-19 global pandemic. An estimated 70,000 Georgians will benefit from this relief fund.

“For people of color, the working poor and middle-class families facing crushing costs, we hope to relieve the strain on desperate Americans and on hospitals struggling to remain open,” Fair Fight founder and former Georgia Gubernatorial Candidate Stacey Abrams said in a statement. 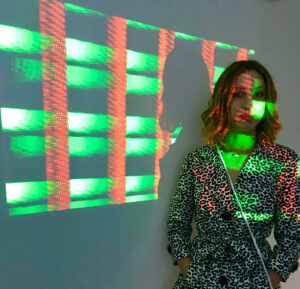 SCAD intends to borrow up to $200 million to provide or improve student housing at campuses in Atlanta and Savannah. (Photo by Kelly Jordan)

The State of Georgia has agreed to issue up to $200 million in bonds on behalf of SCAD to help provide student housing at campuses in Atlanta and Savannah.

Gov. Brian Kemp signed an executive order on Oct. 26 that enables SCAD to access lower interest rates for the debt. The state routinely helps private academic institutions by selling debt through the Private Colleges and Universities Authority. State taxpayers are not on the hook to repay these bonds.

The deal authorizes SCAD to spend up to $125 million for student housing facilities at 40 SCAD Way in Atlanta. The remainder can be spent on student housing at two sites in Savannah operated by the Savannah College of Art and Design.

Moody’s Investors Service rated the bonds as mid-level investment grade, A2. Though the outlook is stable, analysts warned that “credit challenges include intense competition for students within a niche market, with a very heavy dependence on student charges and low selectivity leaving minimal flexibility if demand weakens.”

The school has about $160 million in existing debt, according to the rating action.

We’re moving into winter, which means the heat is cranking and electric bills are skyrocketing.

If you find yourself spending more than 6 percent of your annual income on electricity or natural gas bills, though, you’re eligible for a free Nest Thermostat.

On Wednesday, Nov. 17, folks can visit Fulton County’s Metropolitan Library from 4 p.m. to 6 p.m. to collect a free thermostat on a first-come, first-serve basis.

Demolition of the historic Krispy Kreme on Ponce de Leon Ave began this week. Owner and basketball superstar Shaquille O’Neal had to bulldoze the building after two back-to-back fires that left the building scorched.

The first fire was ruled as arson, although no one has been charged, and the origin of the second blaze is still unknown.

Following the first fire, Shaq posted on Instagram pledging to “be back stronger than ever.”

But if you’re craving a classic glazed donut, never fear. Krispy Kreme will open a pop-up shop on the now-empty site in December, according to Eater Atlanta.

The store is scheduled to be rebuilt next year, but further details have not been released.

Atlanta Firefighters are still hitting hot spots this morning at the iconic Krispy Kreme located on Ponce de Leon. A fast moving fire gutted the building this morning just before 1am. Two employees were able to escape without injuries. #KrispyKreme #AFRD pic.twitter.com/2XWUpQOdJF 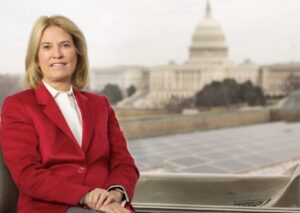 Gray will have the first- or second-ranked TV station in 101 of its designated market areas, according to an Oct. 25 bond rating action by Moody’s Investors Service.

Moody’s is warning of significant risk involving more than $1.5 billion in rated debt Gray intends to sell to finance the deal. Analysts assigned a “speculative rating” to the debt, meaning it is “subject to high credit risk.”

Gray started in 1891 with the founding of The Albany Herald, but rebuilt itself starting in the 1990s. The company sold all existing print and digital products, other than WJHG-TV in Panama City, Fla. The company pursued an expansion strategy of what it describes as a “built-from-scratch” TV portfolio focused on local markets, according to a report on Gray’s website.

Gray has a market cap of $2.31 billion, employs about 7,000 and reported a 12.21 percent increase in sales over a one-year period, according to its profile in The Wall Street Journal. 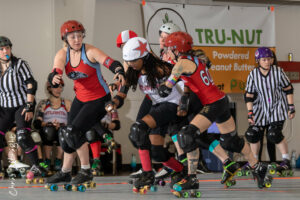 Atlanta Roller Derby to return to play in 2022

Atlanta Roller Derby is returning to play sometime in 2022 after a two-season timeout forced by the COVID-19 pandemic.

Roller derby is a contact sport in which roller-skating teams compete to circle a track. The Atlanta league was founded in 2004 as part of an all-women national league. ARD is owned and operated by the athletes themselves.

Before the pandemic, ARD’s three teams — the Apocalypstix, the Glamma Rays and the Toxic Shocks — played in a February-to-September season at the Yaarab Shrine Center on Ponce de Leon Avenue in Midtown. ARD is also part of the Texas-based Women’s Flat Track Derby Association and engages in regional and national matches.

ARD did not respond to questions about when the 2022 season might begin. The Yaarab Shrine confirmed that it will remain ARD’s venue, but also doesn’t yet know the exact dates.

Besides training for a new season, ARD members have spent the downtime working on racial and social justice movements and internal policies on anti-racism and equity. The highly diverse ARD had already engaged in such conversations before 2020’s protest movements spotlighted them nationwide, but the historic moment led the league to prioritize them.

Honor the Day of the Dead in East Point

Día de los Muertos is a Mexican tradition celebrated at the beginning of November to remember loved ones who have passed away.

The free event will include traditional food and drinks, face painting and a showing of “Coco,” a children’s film based on the holiday.