Ozzie was the oldest male gorilla in the world. (Photo courtesy of Zoo Atlanta)

Atlantans will soon be able to visit their local pharmacy to collect three N95 masks free of charge. Click here to find a list of participating pharmacies. The N95 masks are more effective at protecting folks from COVID-19 than cloth masks, according to the CDC.

If you’re looking for a COVID test, you can order four free at-home tests by clicking here. Every U.S. household is eligible.

On to more local news from the week: 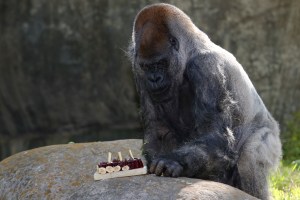 Zoo Atlanta mourns the loss of Ozzie, third oldest gorilla in the world

Zoo Atlanta lost a member of the family this week. Ozzie, the oldest male gorilla in the world, was 61.

His cause of death is unknown, but a necropsy — the non-human equivalent of an autopsy — will be conducted, and more information will be released.

Ozzie joined the Zoo in 1988, and in 2009 he made history by becoming the first gorilla in the world to participate in a voluntary blood pressure reading.

“This is a devastating loss for Zoo Atlanta. While we knew this time would come someday, that inevitability does nothing to stem the deep sadness we feel at losing a legend,” Raymond King, President and CEO, wrote in a press release. “Ozzie’s life’s contributions are indelible, in the generations of individuals he leaves behind in the gorilla population and in the world’s body of knowledge in the care of his species. Our thoughts are with his care team, who have lost a part of their lives and a part of their hearts.”

Western lowland gorillas are critically endangered, with a 60 percent population loss over a 25-year period, according to the International Union for the Conservation of Nature. 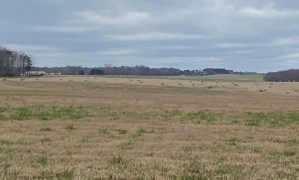 The grassroots opposition to the proposed $5 billion Rivian electric vehicle plant continues to expand as zoning applications to enable the plant’s development are under review in Morgan and Walton counties, and the City of Social Circle.

If the zoning applications are approved without delay, the 2,000-acre site for the plant could have the necessary zoning by March 15, according to a schedule outlined at Tuesday’s meeting of the Joint Development Authority of Jasper, Morgan, Newton and Walton Counties.

Organizers of an effort to raise money to hire lawyers to fight the project report raising $125,000 of the $250,000 needed, according to the administrator’s comment on a gofundme.com page. The page reports just over $12,000 has been raised.

At the JDA meeting Tuesday, the public comment period lasted about an hour. The remarks were overwhelmingly negative, according to a sampling. Ulrike Ackerman’s comment was representative and spurred applause.

“The BMRI will fill a void in research, scholarship, curriculum and public engagement to reveal a holistic understanding of the experiences of men and boys of African descent in the U.S., Africa and the African Diaspora,” said Clarissa Myrick-Harris, chair of the division of humanities and professor of Africana studies at Morehouse.

Rooted in the scholarship of the humanities, humanistic social sciences and creative arts, the institute is unique in its expansive focus on diverse Black masculinities and the positioning of Black men in society as it relates to the intersectionality of race, class, religion, gender, sexuality, politics, art and other factors.

The BMRI will also strengthen the intellectual discovery and discourse at Morehouse in areas related to LGBTQ+ history, culture and social challenges, as well as sexism, patriarchy and misogyny.

“The institute will be a positive force for promoting richer, more nuanced understanding of how Black men affect and are influenced by their communities,” said Kendrick Brown, provost and senior vice president of academic affairs at Morehouse. 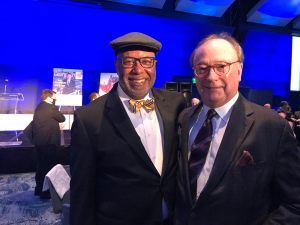 Doug Hooker stands with Kerry Armstrong, chairman of the Atlanta Regional Commission, after being inducted into Georgia Trend’s Hall of Fame on Jan. 25. (Photo by Maria Saporta)

Georgia Trend held its annual 100 Most Influential luncheon at the Georgia Aquarium on Jan. 25, celebrating a reconvening of leaders from throughout the state.

Andre Dickens, the new mayor of the City of Atlanta, made opening comments about the wealth of talent in metro Atlanta and Georgia. Growing up in the Adamsville neighborhood of Atlanta, Dickens said he never would have imagined being named one of Georgia’s 100 Most Influential.

But Dickens did remind Georgia leaders: “How goes Atlanta, so goes the state.”

Doug Hooker, who will retire as executive director of the Atlanta Regional Commission in March, was inducted into Georgia Trend’s Hall of Fame. He credited his parents for helping him develop into being a leader.

“My family taught me that service to the community is above everything else,” said Hooker, who also is the incoming board chairman for the Community Foundation for Greater Atlanta. “Atlanta and Georgia are my career.”

Griff Lynch, executive director of the Georgia Ports Authority, was honored as the 2022 Georgian of the Year — an honor that Lynch’s son described as “lucky,” because the decision was made before the University of Georgia’s football team had won the National Championship — suggesting that coach Kirby Smart would have been a likely honoree.

It became clear why Lynch had been selected when he talked about his past — growing up in the South Bronx, moving to Savannah 11 years ago, and he and his wife deciding to become “Georgians forever.” Then he talked about what the shipping industry has been through in the past couple of years.

“At one point, we had 30 ships in the harbor waiting for a birth,” Lynch said describing the problems that have plagued the industry. “Today, we have one ship at anchor, and at 1 p.m. today, it will be zero ships.” 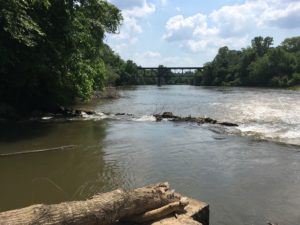 The Chattahoochee River is a natural oasis for folks in the metro area. (Photo by Maggie Lee)

The additional space will be accessible for the CRNRA’s annual three-million-plus visitors.

“When we secure land that falls within the CRNRA boundary, we are offering more people more ways to enjoy this beautiful and vital waterway,” George Dusenbury, Georgia State Director for The Trust for Public Land, said in a press release. “Conservation areas also benefit everyone, whether they ever step foot on this property or not, by cleaning and cooling the air we breathe, buffering communities from floods and providing a healthy habitat for fish, migratory birds and many other species.”

The new space also supports the Chattahoochee RiverLands project, which aims to create a 125-mile greenway along the river — connecting 19 cities across seven counties.

The expansion was possible through an ongoing partnership between the National Recreation Area and The Trust for Public Land and support from the federal Land and Water Conservation Fund.

Larry Johnson, DeKalb County commissioner and president, National Association of Counties, at the Jan. 20 special briefing by the Volcker Alliance and Penn Institute for Urban Research. (Photo via volckeralliance.org)

Local governments have no choice but to serve residents amid COVID and in the face of falling off a fiscal cliff when federal pandemic funding runs out, according to DeKalb County Commissioner Larry Johnson.

“We have to make it happen,” Johnson said of providing governmental services. “We don’t get the luxury of a shutdown. We can’t print money… Yes, we are at a breaking point, but I tell people, ‘This is a turning point.’”

Johnson provided the perspective of a local government official in a special briefing hosted on Jan. 20 by the Volcker Alliance and Penn Institute for Urban Research. In a conversation laden with macro views on “The 2022 Outlook for States and Cities,” Johnson focused on basic government services.

“We run 44 percent of the roads and highways, a third of airports, over 1,000 hospitals, 1,500 public health departments,” Johnson said.

The East Lake Foundation has announced two promotions among its leadership team.

Catherine Woodling, the former director of marketing and communications, will now serve as deputy executive director. Dwayne Watkins, currently serving as data manager, will step into the role of impact and engagement manager.

The Foundation’s President and CEO Daniel Shoy, Jr., will step down from his role at the end of the month. In February, he will rejoin The Arthur M. Blank Family Foundation as the managing director of youth development. 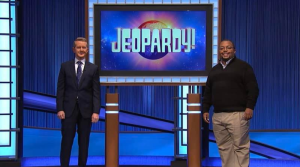 “The experience was life-changing, exciting, and hard. Competition is fierce and the gameplay is much more rigorous when you are on the stage watching from home,” Williams said in a statement.

Williams, who graduated from ASU in 2003 and currently sits as the Director of STEM Strategic Partnerships and Initiatives for the school, spent time reviewing material and practicing vigorously before taping the episode.

“The process of getting to that dream is what changes you,” Williams said. “I believe this event is a pivotal moment for my mindset and my future as it relates to pursuing dreams, even dreams that have been deferred in the past. I am proud to be able to represent ASU and hope my fellow alumni, students and community can be proud of this moment as well.” 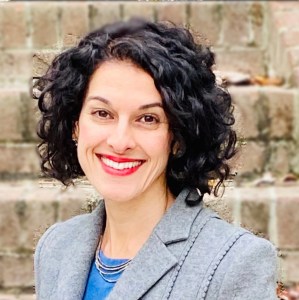 Beginning Feb. 14, Sherrie Mazur will step into her new position at The Arthur M. Blank Family Foundation as its new managing director of foundation communications.

“I am delighted to join the talented, passionate team at The Arthur M. Blank Family Foundation,” Mazur wrote in a press release. “This is an incredible opportunity to lead communications for the Foundation’s next phase of giving and contribute to meaningful positive change. Atlanta holds a special place in my heart; with family already there, I look forward to learning more about the city, the people and the philanthropy community.”

In her last position, Mazur served as the Senior Vice President of Communications and Public Affairs at the V Foundation for Cancer Research.

The Gwinnett County-based Rowen Foundation has selected three new members to join its Board of Directors.

“A key to Rowen’s success in serving the future of Georgia is through deep partnerships with our institutions of higher learning,” Sachin Shailendra, chair of the Rowen Foundation, said in a press release. “Jann, Jack and Bert are three of our state’s most respected academic leaders, and they will bring immense value and insight to Rowen as site development begins and we activate the partnerships and programs that will bring a unique mix of tenants to our property.”

The Rowen team is creating a “knowledge community,” which reimagines the traditional office environment to contain a community with a mix of offices, research facilities, public space and residences. The group will focus on business and innovation, emphasizing the environment, agriculture and medicine.

The proposed site is nearly 2,000 acres along Highway 316 in Gwinnett County.

The organization held a virtual live stream on Thursday, Jan. 27, to discuss future plans. Watch the recording to learn more.

Previous Article
Atlanta to ask MARTA to account for spending of More MARTA sales tax
Next Article
Can the City of Atlanta do more to prevent evictions?