Solar power is on the rise for Georgia’s businesses, and more and more companies are jumping on board this trend due to falling costs and increased pushes for sustainability. Facebook is building a solar farm in Newton County to power its new data center. Agnes Scott College is using solar energy to offset the campus’ carbon emissions. Even Georgia’s beer is being brewed with help from the sun thanks to Terrapin Beer Co.’s recently installed solar rooftop. 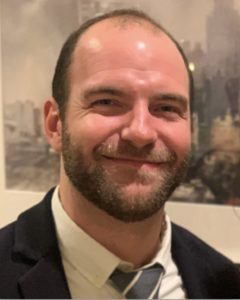 While Georgia businesses are increasing their solar panel installations, for homeowners, the state lags behind most of the nation in solar adoption. It looks like that could change this year, though. New regulatory frameworks that will grant consumers more independence from both fossil fuels and the power company could make 2020 a particularly big year for Georgia’s residential solar industry.

For the small handful of Georgia homeowners with solar panels currently on their properties, a household’s electric needs can be mostly met with energy harnessed from the sun. But that supply isn’t always consistent. What happens if you need extra energy at night when the sun isn’t shining or if you produce more energy than you can use in a given period of time?

With the current system, whenever a house generates a surplus of electric energy, Georgia Power buys the energy at a wholesale price of about 3 cents per kilowatt-hour and sends it back to the grid. Georgia Power then sells this electricity to your neighbor (or you at a later time) for roughly 13 cents per kilowatt-hour, essentially buying your solar-generated energy for cheap before selling it for a sizable profit.

This is set to change this year, though, thanks to a new net metering policy that was approved at the tail-end of last year. Katie Chiles Ottenweller, southeast director at Vote Solar, says that the Georgia Public Service Commission has ordered Georgia Power to move to a more equitable financial policy for consumers called net metering – a system already in place in many other states including Arizona, California, and Colorado. 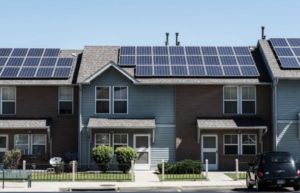 Homeowners could save up to thousands of dollars over the lifespan of a solar array under a new state policy that may prompt more owners to install an array this year. Credit: energy.gov

“With traditional monthly net metering you are getting a credit at the same value that you are buying electricity,” Ottenweller says. “So, you’re effectively getting a 13-cent credit for that extra kilowatt-hour.”

Those extra cents provide a huge economic incentive for current and prospective solar owners in Georgia, and they could save homeowners hundreds, if not thousands, of dollars in energy costs over the lifetime of a solar system. It is worth noting that the policy is currently set to cap at 5,000 customers, and it is unclear what will happen after that number is reached.

Without any form of effective metering up to this point, Georgia’s solar owners have had to find ways to save and store their excess energy without being forced to sell it back to Georgia Power for a fraction of its worth. For most, that meant investing in battery storage.

Doug Strait, a solar owner in Dunwoody, installed his home’s 7-kilowatt rooftop system in late 2018 and opted for a 10-kilowatt battery in April of 2019. These batteries can cost several thousand dollars, but they grant the owner more independence from the utility company. “It’s almost not worth it to not have a battery,” Strait says. “Without it, you’re just giving away a lot of energy back to Georgia Power.”

Batteries can come in different forms as well. John Burkhardt has a ground mount solar installation for his home in Milton, and he has implemented an innovative solution to his excess energy problem: he bought a used electric car. Instead of losing electricity back to the grid, he uses it to charge his car during the day while he works from home. “At the end of the day, I looked at how many kilowatts I would get for a home battery and how many kilowatts the electric car had,” Burkhardt says. “I realized I was buying a battery and getting a free car.”

This necessity of battery storage, however, could lessen once net metering takes effect. Strait speculates that this new policy could be a game-changer for Georgia solar. “If you don’t have to worry about the battery, and you’re getting fair market rates for all the power you’re getting back, I could see it being more likely for people to actually get it,” he says.

It remains to be seen if more Georgia residents will consider solar installations this year, but net metering isn’t the only factor that might encourage people to do so. One major consideration is that federal incentives for solar power won’t be around for long.

The Investment Tax Credit (ITC) for residential and commercial solar is currently available but set to run out gradually over the next few years. Last year, 30 percent of the cost of installing a solar energy system could be deducted from your federal taxes. This year it has dropped to 26 percent, in 2021 it will be 22 percent, and from 2022 onwards there will be no credit at all for residential solar.

For Ottenweller, the effects of this diminishing tax credit as well as the new net metering policy cap remain uncertain. “I think that could slow things down a little bit,” she says. “But on the other hand, when you have a cap on the market, especially an artificial cap like 5,000 customers, people tend to see solar as being on sale, so you could see a rush to get in under the cap.”

Another upcoming change to Georgia’s energy landscape that could affect consumer views towards solar will be the completion of the Vogtle Nuclear Plant expansion. Power bills are expected to increase once its construction is finished in the next year or two which could push more Georgians to consider solar energy to bring down their monthly utility costs.

While the specifics of exactly when and how these new changes will go into effect remain murky, clarity is expected in the coming months. According to Georgia Power’s website, they will work with the Georgia Public Service Commission to “confirm the details and develop a plan to implement the motion related to behind-the-meter solar installations” after the final order on these changes is issued. Once this happens, more solar panels could begin popping up on rooftops across the state.

For those interested in solar installations for their homes, the consensus among Georgia’s current solar owners is to do your homework. Burkhardt advises following the same type of research you would for any home renovation. “Get 3 quotes from 3 contractors,” he says. “It’s free, and they provide you with reports that give a real breakdown analysis of what you can expect.”

Georgia Power’s current solar programs can also be viewed on their website.

Note to readers: Peter Dye is an instructor and international student adviser at Oglethorpe University. He has written for local and national publications including this piece in ‘The Bitter Southerner’ and this piece in ‘American City & County’ magazine.