Could rats bring out the best in a restaurant?

That’s the crisis in an unexpected tail, er, tale of a neighborhood tavern in Decatur.

The doors had always stayed open thanks to customers whose loyalty was unspoken.

When the doors shut without warning earlier this month, that loyalty was tested beyond the stomachs of most restaurant diners. 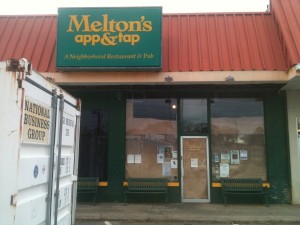 Faced with a rat problem from an adjacent neighbor, Melton's App & Tap in Decatur closed without saying why. A sign on the door informed patrons, “Due to circumstances beyond our control, we regret to inform you that Melton’s will be temporarily closed for business. We apologize for any inconvenience.” (Photo by: Ben Smith)

Will they eat again at a restaurant forced to close by rats?

The collective answer will make or break this beloved pub, and appears to be a resounding “yes” and beyond.

The infestation, apparently caused by the pet store next door, has not just intensified the warm feelings that folks have for this neighborhood pub. The attention has also given Melton’s a surprising viral reach to activist eaters – people who want to make a statement against the bad behavior that forced Melton to close.

“I have been following your rat problems in the paper and online,” said Bob Cottrell. “Just wanted you to know that you can count on four new customers when you reopen. I feel terrible for you with what has happened, and would like to be a part of helping out with our business to recover some of your cost of getting the place ready.”

Now owner Aaron Melton is counting on them making good on those promises.

He hasn’t set a re-opening date, but said late last week that he’s committed to spending into the six figures for the forced reinvention of his restaurant.

He’s had to change gears before. The rats are the worst, but not the first, challenge for him in an era and landscape dotted with failed eateries.

To survive, he’s had to tap his lifelong passion for food service and his appetite for “guarded risk-taking.”

“As a kid, I loved going out to eat,” said Melton, who went to Douglas County High School. “My mom and grandparents were great cooks, and the family was always big into holiday meals. I was always a food person growing up.”

Melton graduated from the University of Georgia with a degree in small business management and entrepreneurship, with an emphasis in restaurants. He worked for Lettuce Souprise You and California Dreaming.

“I wanted to keep those same food standards that I learned, but do it real simply,” he said.

His pub opened with a vow to serve fine microbrews and local beers and made-from-scratch appetizers like buffalo tenders. 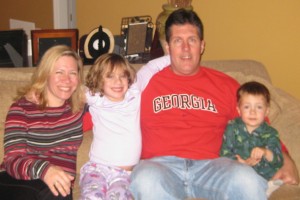 He leased the quiet end of a small strip center where North Decatur and Medlock Roads make an asterisk with Scott Boulevard. The location was a little risky because the Decatur square, a mile south, had not yet blossomed.

He put down a personal stake, too, with a home a mile away where he and wife Staci raise two kids.

“Aaron loves what he does and always makes sure that he does it 100 percent,” Staci said. “The reason we have the staff that we have is because Aaron would never ask anyone to do what he wouldn’t do, and it is because of him that the turnover at Melton’s is much less than a typical restaurant.”

His staff grew to 32, most of them part-time.

“Melton’s is where I once worked, where I met my husband, where we now bring our daughter and where we have made many great friends,” Courtney Dover Ryan said.

Melton knew that his was “a location worth fighting for.”

In July, according to earlier interviews Melton gave to other news outlets, employees found a hot dog bag that was broken into, and Melton’s began securing its food and space.

The problem was traced to the pet store’s food supplies, and persisted to the point that Melton sued successfully for an injunction shutting down Pet Supermarket on Oct. 20. The store could re-open when the problem was fixed, the judge said. 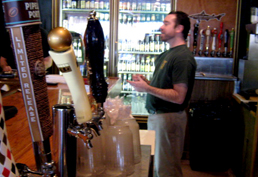 The pet store was still closed in early November, when a customer saw a rat in the restaurant. The problem wasn’t fixed.

Melton immediately closed his doors. One moment of crisis, he knew, can destroy years of hard work.

“Ten years ago, we opened a second restaurant in Oakhurst that looked really great,” he said. “But after 9/11, the economy dried up. We couldn’t risk everything so we closed it…. Our margins are not high, and we always had the philosophy that if we did things the right way, that will sustain us in the hard times.”

He tried to keep the problem secret. A note on the pub said he was closed because of unforeseen circumstances. When local media heard about his case, he had to go public. “That’s when I had double anxiety,” he said, of possible customer backlash.

“I had no idea what the public reaction would be,” he said. “I was terrified. A rat is a rat. People have a bad thought about that. Had it [customer reaction] gone the other direction, I was looking at giving up the restaurant.”

Instead, the sudden absence made the collective customer heart of Melton’s burst with fondness. After years of relying on the simply good fare, patrons responded with fundamental loyalty. They used words like “craving” and “devastated” and “shepherd’s pie.”

“We all want to do something,” wrote Barb Dalton. “I could come wash dishes.”

“Be sure to let us neighbors know when you’re back open, and we’ll be the first in line!” wrote Amanda Vessey.

“I drive from downtown Atlanta to eat there and would sure hate to lose the restaurant,” Lynn Daley added.

Customers formed and flocked to a “Keep Melton’s Open” Facebook page. One designed a “Melton’s Refugee” benefit T-shirt. Others offered donations for legal fees and other ideas for fundraisers. 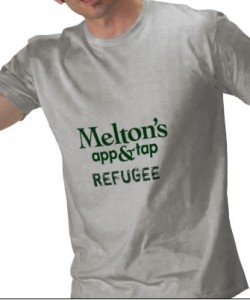 A Melton's patron designed these benefit T-shirts to help with expenses related to the rat cleanup. (Photo by: Andrea Greengard)

Last week, a DeKalb County judge ruled – despite Melton’s opposition — that the pet store had done enough repairs. It has reopened.

To ensure rats stay out, Aaron Melton has employed contractors to scour “every square inch” for possible pest entry and come up with safeguards that he estimates could cost more than $100,000.

He may recoup some repair cost from his landlord or Pet Supermarket, but it’s a gamble. To forge ahead, he is counting on his customers’ re-investment. “They are the difference maker,” he said.

In the midst of his difficult reinvention, he has begun a new narrative for Melton’s. The rats exposed the big heart of a small tavern.