The walking-talking  history book of the Coca-Cola Co. — Phil Mooney — told members of the Rotary Club of Atlanta Monday that his favorite piece of memorabilia was the first contour bottle — a slightly fatter version of the one that became an international icon.

After working for the Coca-Cola Co. for 35 years, Mooney retired as its archivist in March — becoming the “undisputed dean of corporate archivists” in the country, according to Clyde Tuggle, a Coca-Cola senior vice president who is chief public affairs and communications officer.

Mooney said only two of the original fatter contour bottles exists, and one belongs to company, so he didn’t hesitate to claim it as his favorite. 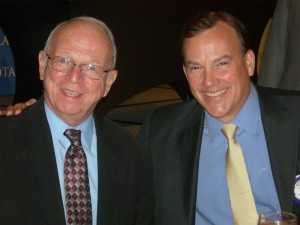 In outlining the history of the Coca-Cola, the design of the bottle was a turning point.

John Pemberton invented the drink on May 8, 1886 serving it at a pharmacy at Five Points. He wasn’t a great businessman, spending $76 the first year with revenues of only $50.

So shortly after he sold it to Asa Candler for 2,500. Candler was a much more savvy businessman who created several marketing innovations, including coupons for free Cokes — then served at soda fountains.

Then in 1899, two gentlemen came to Atlanta wanted to put Coca-Cola in bottles. Candler told them she would them the rights to bottle Coca-Cola for $1 — as long as the bottlers paid for the costs of bottling, distributing and selling Cokes while buying the syrup from the company. It’s the business model that the company still uses today.

But early on, there were not uniform bottles. They came in different sizes and colors.

“We needed to create a proprietary package,” Mooney said, adding that the company issued a challenge — to design a bottle that was so distinct that one could recognize it in the dark. That’s how the contoured bottle came about, a package that is protected by a trademark. 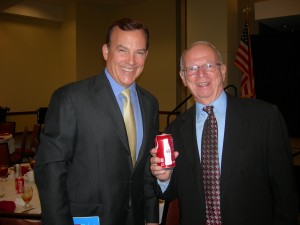 Clyde Tuggle and Phil Mooney, with required Coke can, after Atlanta Rotary talk

In 1919, Asa Candler sold the company to a group of investors headed by Ernest Woodruff for $25 million. Woodruff brought in his son, Robert, to become the president of the company in 1923 — beginning his 60-year leadership of the company.

It was Robert Woodruff who believed in making Coca-Cola a global brand. By 1930, it was being sold in about 30 countries. And he even made sure Coca-Cola was sold at the 1928 Olympic Games in Amsterdam.

“Woodruff believed Coca-Cola needed to be within an arm’s length of desire,” Mooney said, adding that advertising campaigns became increasingly important for the company. “The Pause that Refreshes” lasted from the 1920s to the mid-1950s.

During World War II, Woodruff committed to President Ike Eisenhower that Cokes would be available to all the troops. They created 64 portable bottling plants that could be transported with the troops.

“After World War II, that’s when our global business took off,” Mooney said. Even Time Magazine put Coca-Cola on its cover, the first time that a non-person had graced the cover of the magazine.

Up until 1955, the company only had one product and one package — Coca-Cola in a bottle. But then it began to introduce new products — Fanta, Sprite, Tab, Fresca, Diet Coke, and even the failed experiment — New Coke, which introduced a new, sweeter formula. That lasted 79 days when the public demanded what became known as “Classic Coke.”

By 2011, Coca-Cola has more than 500 brands and more than 3,000 products and has operations in more than 200 countries. There are a couple of exceptions — Cuba and North Korea — to name two.

In great Coca-Cola tradition, there was a can of Coke (or Diet Coke or Coke Zero) at every one’s place setting. Also, before he began to speak, Mooney was sure to place the required Coca-Cola can on the top of the podium as the company prop — another example of how Coca-Cola never misses an opportunity to make an impression.