Journalist Bill Shipp, enjoys his 80th, marveling at how many friends he has — now that he’s no longer writing

Even Bill Shipp was amazed by the folks who showed up for his 80th birthday party at Vinings Bank on Tuesday. 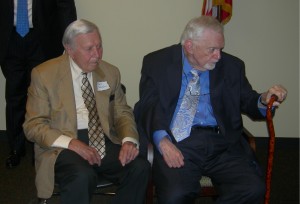 Looking around the room, Shipp whispered in my ear: “Do you think all these people would have shown up if I were still writing my column?”

And then he laughed that devilish little laugh of his — fully understanding the fine line he’s danced on for decades — being a loving thorn in the side of those in power.

But in the past decade those in power thought he had crossed that line. As Galloway reported, former Gov. Sonny Perdue’s first executive order as Georgia’s first Republican governor in more than 100 years was to bar his staff from speaking with Shipp. The rumor was that in the Perdue administration speaking to Shipp could get you fired.

But Shipp started off his journalism career angering those in power. When he was editor of the University of Georgia’s student newspaper — the Red & Black — he wrote a column on Oct. 8, 1953 saying how misguided the university was to deny admission to Horace Ward just because he was black. 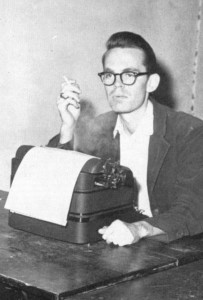 Bill Shipp when he was editor at the Red and Black

“There’s absolutely no logic in excluding the Negro from the white man’s way of life, especially at a university,” Shipp wrote at the time.

That column cause Shipp to get an early exit from UGA and into the military. President Jimmy Carter appointed Ward as the first African-American in Georgia to serve on the federal bench.

So it was fitting that Horace Ward also was there on Tuesday to wish Shipp a happy birthday. In fact, several people mentioned that it would probably be impossible to replicate such a gathering of people who were present at Vinings Bank on Tuesday again.

After a warm happy birthday quartet that included Gov. Barnes and Gov. Miller, the stories of Shipp’s crafty writing were shared. 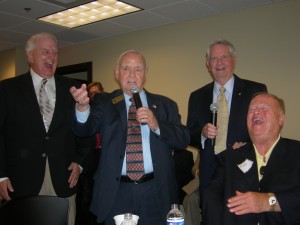 “If Bill Shipp needed a thousand words, even his Mama ain’t safe,” Barnes said. “All of us in public life are kind of glad when the ink went out of his pencil.”

Gov. Harris spoke about how his wife would put up sticky notes on a mirror of the names of people to pray for.

“Bill Shipp was at the top of that mirror,” Harris said. “He remained there for eight years.”

And then Harris gave Shipp a back-handed compliment. “Bill has a unique gift,” Harris said. “He is able to distort accurate information.” 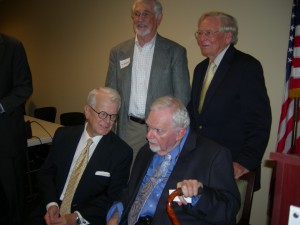 One example was told by Shipp’s long-time friend George Berry about a trip that then Lt. Gov. Zell Miller took to a conference to give a speech at the request of a lobbyist for the pharmaceutical industry.

Shipp wrote that he had it on good authority that “Zell Miller was in the Caribbean in the company of a drug dealer.” When Miller complained, Shipp said he wrote it to make sure he was still reading his column. 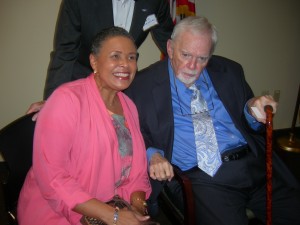 Miller said he was asked at the party whether Shipp was for him or against him. “That’s a very good question,” Miller answered. “I’ve had it both ways. I love him.  I love him very much. There will never be another like you. I love you Bill.”

That was the theme of the day.

“They don’t make them like you any more,” Barnes said to Shipp. “If we have got a great state, it’s because of people like you.”

Shipp belonged to an era when the daily paper was the voice of city, the region, the state and the even the South. 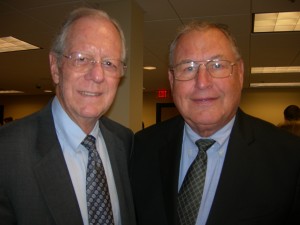 Gov. Joe Frank Harris and George Berry, who served as his commissioner of industry and trade

What was written on the pages of the morning and the afternoon papers really mattered; columnists and editorial writers really moved public opinions — causing politicians to be held accountable for how their actions would impact metro Atlanta and Georgia for decades to come.

It was not always easy.

Berry, who join Shipp and other politicos and journalists for drinks and discourse after work, admitted to getting frustrated with his friend.

“I told him: ‘You have pissed off anybody who is anybody in this state. Other than your family, I will be the only person at your funeral, and I’m trying to decide if I’ll be there,’” Berry recalled.

Now that Shipp has put down his pen and quit writing a column, all the somebodies felt safe to come out from the shadows and show their love and appreciation for a man who walked a fine line through Georgia’s modern history in such a fine way. 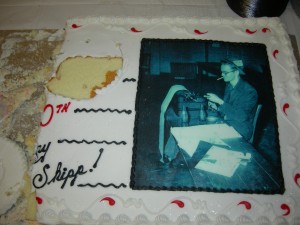