You can travel back in time.

For our journey to the past, we went to 935 Crest Valley Drive in Sandy Springs to visit an 18-sided (virtually round) home that my father had designed 50 years ago.

Curbed Atlanta had posted a story on Feb. 11 about the house complete with a series of photos. A friend suggested we should try to get a tour of the home.

After a wonderful telephone conversation with real estate agent Jason Morris, we were invited to come to the house on Sunday. There was an added bonus — the owner Ann Jones — would be there. 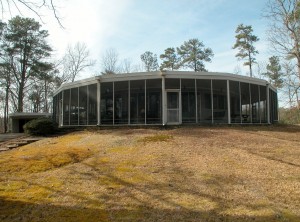 Papa — better known to the world as Ike Saporta — had designed the house for Mrs. Jones in 1964. She had kept it suspended in time for five decades — barely altering Papa’s original vision.

Mrs. Jones welcomed us into her home — my son, David Luse, had come along so he could see a home that his “Pappou” had designed. Immediately upon meeting him, Mrs. Jones told David he looked like his grandfather. David beamed as he became more and more enamored with the house Papa had designed a half century ago.

After touring the house, Mrs. Jones wanted to talk about my father — and what it had been like living in the most unusual home that  he had designed for her family. 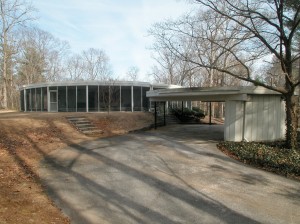 The back of the house with a circular carport

They were then a young couple with two children needing a larger house. She had driven by Crest Valley Drive and noticed a few adjoining wooded lots for sale totaling 26 acres.

She decided the family should buy a lot and build a house, but she didn’t know where to begin. So she contacted a friend, George Sowers, a civil engineer working at Georgia Tech, to ask who she should hire.

She showed him the property and they walked around a little bit. Then Papa returned and walked the entire hilly and wooded terrain. 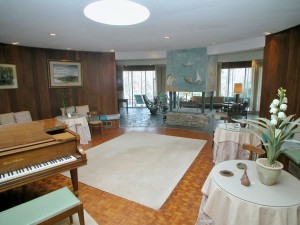 The music room – living room with fireplace in the middle

“Now this is the lot you want to buy,” he told her. The asking price was either $12,000 or $12,500 for the 6.7 acres, and Mrs. Jones asked my father how much she should offer. He told her the full amount and that she should be there Monday morning when the office opened with a check in hand.

She followed his advice and later found out someone else was prepared to buy that site the very next day.

So began an amazing relationship between an architect and a client — one that remains to this day despite the passing of my father in November 1998. 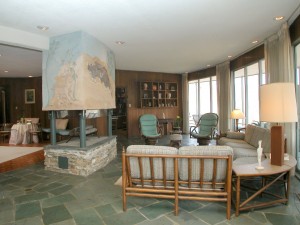 The living room area with fireplace on the left

He picked the building site — the highest summit on the property.  When driving up to the house from the quarter-mile long driveway, Jason Morris said the house appears kind of like a spaceship on the horizon.

Once inside, Mrs. Jones pointed to her favorite view where she can see the moon rise over the trees. We are surrounded by nature.

“Mr. Saporta talked to us about how we lived. We are not at all formal,” she said. “I told him I’d like to have a lot of glass so I could enjoy the woods.”

And then she gave my father total license to design the house (an architect’s dream) even letting him pick out the colors of cabinets. 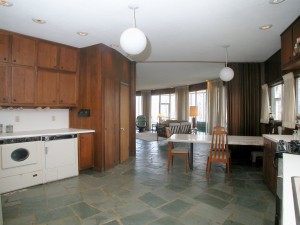 View from the kitchen towards living area

I asked if she or her husband had ever questioned my father about designing a round house. During those days, everyone in the area seemed to be building mansion-like homes with columns.

“That came from him,” she said. “We turned everything over to him. He really had a free hand.”

A mutual friend, Tina Menaboni — the sister of the famous bird painter Athos Menaboni — summed it up quite accurately when she told my father in front of Mrs. Jones: “You are obsessed with women’s breasts. You want everything to be round.” 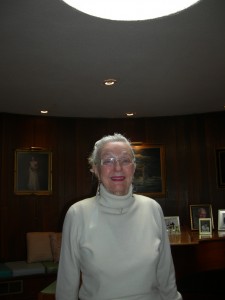 Ann Jones under the central skylight (Photo by Maria Saporta)

Mrs. Menaboni was onto something. Papa designed the University Plaza apartments — two round doughnuts — along Fair Street for students attending the historically-black colleges and universities in the area. H.J. Russell was the contractor — one of many of their joint ventures. Papa also designed a small shopping district, also on Fair Street, with a round building covered with mosaic stones.

Mrs. Jones’ eyes twinkled. “He was such a wonderful man,” she said. “I’ve been so happy since the day we moved in. It’s been absolutely marvelous.”

The house, which has four bedrooms and two bathrooms, is certainly modest by today’s McMansion standards. But there’s a timeless quality to the spaces that emanate from a round skylight right at the middle of the home. Natural light shines down in the grand central space where the living room, music room and kitchen simply flow into one large open floor plan. 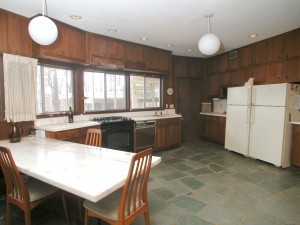 The kitchen – basically unaltered in 50 years

Again, such an open design was so outside the ordinary in the way houses in Atlanta were being designed in the 1960s.

“Your father was very forward-looking,” Mrs. Jones said remembering when he proposed the combined living space rather than several separate rooms. “I said alright. He knows what he’s doing. I just accepted everything.”

Another unusual feature was putting a fireplace in the middle of the living area with large stone murals adorning its four sides. Papa commissioned Belgian artist Jeanne Gaevart, a most eccentric and talented friend, to do the murals. For months during construction, she lived on the property camping out in a sleeping bag while she worked. Gaevart included the two Jones children in different settings in the murals — making the home all that more personal. 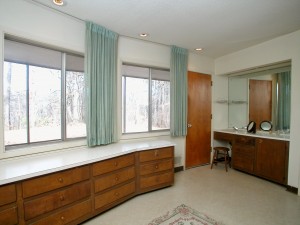 Master bedroom view of the woods

I remember Papa taking us all out to visit the house during construction in 1964 on a snowy Atlanta day. He showed us all around and took us to the roof so we could enjoy the view. My sister, Elena, walked on a snow-covered overhang that was not part of the solid roof, and she fell — breaking her arm, injuring her eye and having a concussion. We rushed her to the emergency room as the snow continued to fall.

For me, seeing the house was like traveling back in time, feeling my father throughout the house — knowing it was having a profound impact on my son. The spaces that Papa had created for the Jones family 50 years ago were still alive. 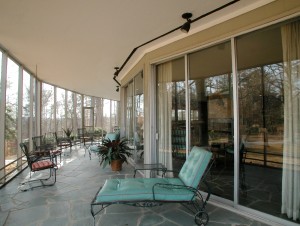 A view of the outdoor space that surrounds the house

“It’s just like he designed it,” Mrs. Jones said, adding that if she were to do it all over again, she would do it “just exactly like it is.”

So why is she selling it?

“I’m 82 now, and I’m in excellent health,” Mrs. Jones said. “At some point, I will need help. If I sell this property, I’m going to move into an active retirement center. I would be so pleased if someone came here and decided to keep the house as is.”

One can feel Mrs. Jones’ mixed emotions about the prospect of leaving her beloved home.

“I’m sure whenever I go down that driveway for the last time…,” she said without finishing her sentence. “In my will, I’ve said I want my ashes to be spread on this property.”