Between faith and facts, ‘Zealot’ author Reza Aslan zeroes in

What do you most ardently believe in, and what discoveries might change your mind? Reza Aslan’s strong clear voice at the intersection of belief and facts came to metro Atlanta last week, drawing more than 470 people to the First Baptist Church in Decatur. 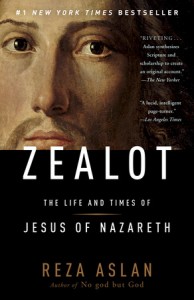 “Zealot,” by Reza Aslan, soared to the top of several best seller lists after a Fox News interview with the author about his controversial book about Jesus went viral. Credit: Random House.

The author of the bestseller “Zealot: The Life and Times of Jesus of Nazareth,” Aslan drew my attention after his July 2013 viral Fox News interview. You may have seen how the interviewer repeatedly questioned why Aslan, a Muslim and a scholar of religions and professor of creative writing at the University of California Riverside, would write a book about Jesus.

Jesus, of course, always evokes hard questions. One such memory haunts me from my college Religion 101 course. “What if archaeologists said they’d found the bones of Jesus Christ and had proven he was merely human?” my professor asked 33 years ago. “Would you still go to church and follow his teachings?”

In his book and at his Atlanta-area appearance, Aslan asserts what my professor hypothetically proposed, and he makes a provocative argument. He’s also got a great sense of humor.

“Part of the reason [for writing “Zealot”] is my secret Muslim agenda to destroy Christianity,” he joked in reference to the Fox clip. The quip provoked widespread laughter from audience members attending the lecture, which was sponsored by the Georgia Center for the Book.

If that sounded radical, Aslan was just getting going.

Jesus of Nazareth, Aslan argues, was an entirely human, illiterate peasant who did not come to save the world, but to deliver the Jews from Roman occupation and from the collaborators who profited from it. The divine Jesus, said Aslan, emerged later from the ruins of a crushed Jewish revolt in 70 C.E. when their religion became anathema in the Roman empire. Early Christians reacted by making him more celestial, less Jewish and less revolutionary.

Aslan formed his view through a now well-known personal and professional journey. The son of Iranian immigrants, he turned his life over to Christ at summer camp when he was 15. Later he turned away from that faith. Years later, during two decades of research, he rediscovered a very different Jesus, “a far more revolutionary character, a far more radical character.”

“What you’re talking about is a poor — and when I say poor, the poorest of the poor – marginal, uneducated, very likely to be illiterate Jewish peasant from the backwoods of Galilee,” Aslan said, “who, nevertheless, used his charisma, the power of his teachings …to start a movement on behalf the poor, the weak, the dispossessed, the marginalized and women.”

“It was a movement that was such a threat that he was hunted down and executed for the crime of sedition,” Aslan said. “I don’t know about you, but that sounds like the most interesting man in the world to me.” 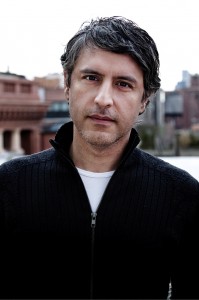 Aslan challenges essential parts of the traditional Jesus story. Among them, the account of his birth in Bethlehem and the depiction of Pontius Pilate as his unwilling executioner. Credit: Malin Fezehai.

Among other things, Aslan’s story of Jesus does not include a virgin birth in Bethlehem. His Jesus was born in Nazareth. Aslan’s Pontius Pilate was not a hand-wringing politician who wanted to spare Jesus; he was a bloodthirsty tyrant who would likely have had no problem crucifying Jesus. The emperor eventually had Pilate removed from his post for excessive cruelty.

Aslan crafted his depiction of Jesus from a blending of gospel passages most scholars agree are accurate with an extensive recounting of the times in which he lived. The first century, for Jews who lived in what is present-day Palestine and Israel, was an apocalyptic time brimming with class resentment and rage against those in power.

“The sullying and corruption of the temple, the mass turning away from the Law of Moses, this pagan and imperial occupation that controlled the Jews’ life—the only explanation for that is that they were living in the end times,” Aslan said.

The times produced “a whole new group of Jews” that scholars refer to as zealots, revolutionaries with “an uncompromising devotion to the sole sovereignty of God,” who refused to bend to the will of Rome and “lashed out at those who did, sometimes violently,” said Aslan.

Jesus was one of them, Aslan insists.

What and how you know

“Is it possible that Jesus died on the cross, was put in a tomb and rose again three days later? Sure, it’s possible. Is it likely? No, it’s not,” Aslan said. “But so what? So what? Those are two different questions, two different modes of knowing. And it’s up to you to decide what’s important to you.”

“Faith is not religion. Faith is inexpressible. It’s ineffable. It’s indefinable. It is purely individualistic.” Aslan described religion as a “man-made language of symbols and metaphors that enable like-minded people to communicate with others and with themselves … the ineffable, indescribable experience of faith. It is nothing more than that.”

He offered this example: “How many of you would know what I mean when I say, ‘I’ve been washed in the blood of the lamb’?” 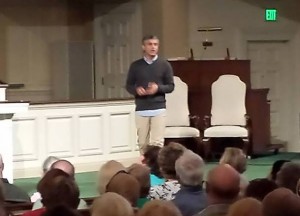 Aslan, who is Muslim, tells his Decatur audience there is no conflict between his faith and his historical research. Credit: The Georgia Center for the Book.

Aslan asked for a show of hands.

“For those of you speak my language, a language of symbols and metaphors, then we just shared a profound moment. I just told you something that is deep and meaningful.”

“If you are not versed in that language, that sounds insane,” Aslan said.

“I am a Muslim, not because I think Islam is more right; it’s not,” he added. “My belief is not in the Qur’an; it is a man-made document like the Gospels—like every scripture in the world, sure. Do I believe the Qur’an is divinely inspired? Yeah, I do. I also think [Beatles album] Abbey Road is divinely inspired.”

In that moment I marveled at the thought that I, a Christian, might have more in common with Reza Aslan, a Muslim, than I do with many members of my own faith. I recalled my religion professor: What if archaeologists said they’d found the bones of Jesus Christ and had proven he was merely human? Would you still go to church and follow his teachings?”

That question took me years to answer, and my answer was yes. Listening to Aslan helped me better see why.