Rich’s and the 1960 presidential election 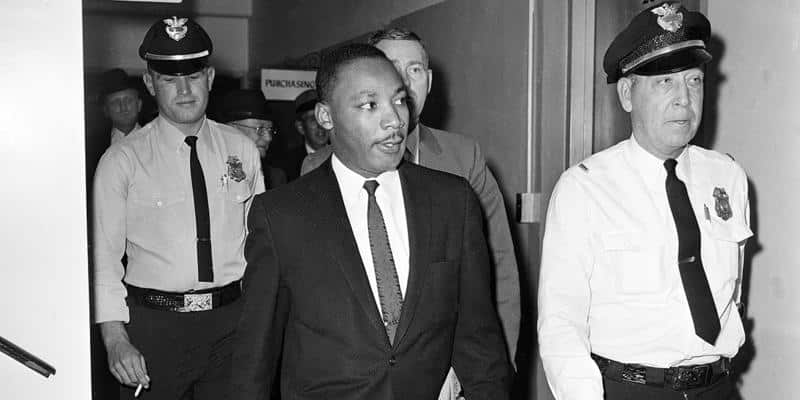 This week, JEREMY KATZ, of the Breman Museum, recounts the role of Rich’s Department Store in the civil rights movement and its impact on the 1960 presidential election. 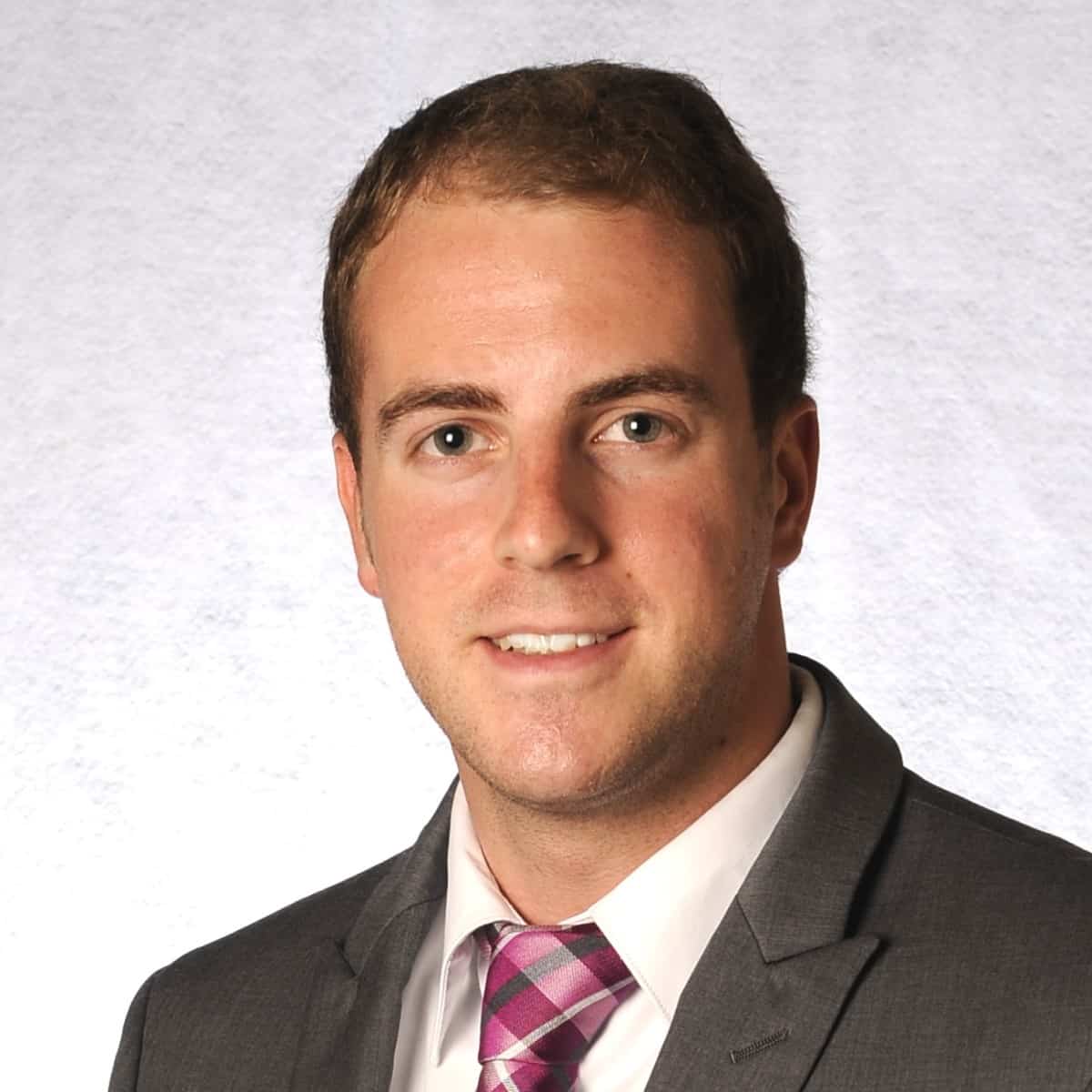 On February 22nd and February 26th, the Breman Museum will lead a Civil Rights Trolley Tour to several sites throughout downtown Atlanta related to Jewish involvement in the civil rights movement. One of the stops is outside the location of the former Rich’s Department Store where the famous clock is still affixed to what is now a federal building on the corner of Alabama and Broad Street. According to the New Georgia Encyclopedia, Rich’s represents the quintessential shopping experience of 20th-century Atlanta.

Jeff Clemmons, an expert on the history of Rich’s who will be leading one of the tours, recognizes the store’s significance in leveling the nation’s history. In his book, Rich’s: A Southern Institution, Clemmons asserts that John F. Kennedy would not have won the 1960 election against Richard Nixon if it were not for a sit-in held at Rich’s flagship downtown store. 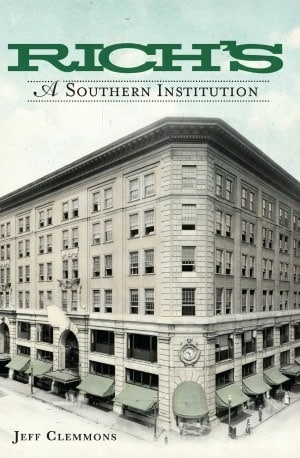 Jeff Clemmons is the author of Rich’s: A Southern Institution.

“On the morning of October 19, 1960, less than three weeks before the upcoming presidential election, approximately eighty Atlanta University Center students descended on Rich’s, as well as seven other retailers in downtown Atlanta. At Rich’s, where most of the students had gathered, picketers marched outside the store while other students attempted to sit-in at predetermined locations throughout the store’s complex at varying times. At 10:00 a.m., Lonnie King, MLK, Blondean Orbert-Nelson and Marilyn Pryce (two Spelman College roommates who had been picked days earlier by Lonnie King to join the duo), met on Rich’s Crystal Bridge, where The Bridge café was located. They, along with ten other students gathered there, were denied service by Rich’s staff. As a result, the quartet took an elevator up to the sixth floor to try to sit-in at the Magnolia Room.

“On the sixth floor, just off the elevators and in front of the entrance to the Magnolia Room, MLK approached the maître d’ and told him that he and the other black students assembled wanted to enter the restaurant and be served. The maître d’ responded that the restaurant did not serve ‘negroes,’ to which he added that if the students did not leave, he would have to call the police. Soon thereafter, MLK, Lonnie King, Orbert-Nelson and Pryce were arrested. . . .

“Later that day, in front of Judge James E. Webb in an early session of Municipal Court, MLK and the others arraigned with him refused bail, which had been set for each at $500. MLK remarked to the judge that he felt he had done nothing wrong in going peacefully and nonviolently to Rich’s and asking to be served and then asked the judge to vacate the charges. Webb refused, and as a result, MLK spent the first night of his life in jail, sharing a cell with students. 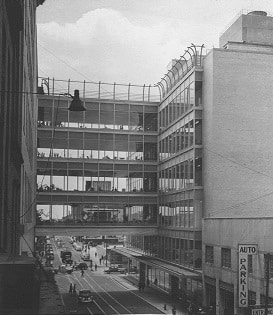 Neither the Bridge Cafe, located on Rich’s Crystal Bridge, nor the Magnolia Room would serve MLK and his companions. Courtesy of the Cuba Family Archives for Southern Jewish History

“On Saturday, October 22, MLK and all the other protestors still sat in jail, proclaiming ‘Jail, no bail.’ At Rich’s, meanwhile, protesting had reached a fevered pitch, with the KKK joining the fray and marching in opposition to the students. Over at city hall, Atlanta mayor William B. Hartsfield had brokered a deal that day with Atlanta’s black leaders to suspend the student protests for thirty days so that he could have serious talks with Atlanta’s merchants about desegregating. The deal was only agreed to because Hartsfield had concocted a lie, telling those gathered that he was acting upon John F. Kennedy’s (JFK) personal intervention. The truth was that Hartsfield had only been encouraged earlier to work out a deal with the black leaders by JFK’s campaign’s civil rights director, Harris Wofford, who was interested in the events unfolding in Atlanta. When news broke of Hartsfield’s claim, JFK’s campaign was furious but publicly stated they would make an inquiry about the incident and report back as to what they thought should be done, adding that JFK hoped a satisfactory deal could be arranged.”

Clemmons goes on to say: “. . . [on] October 26, less than two weeks before the presidential election, JFK quietly made a 6:30 a.m. phone call to Georgia governor Ernest Vandiver Jr., a supporter of his, and asked if the governor could help get MLK out of prison. JFK thought that by helping MLK get released from prison, he could strengthen his campaign. Unlike Nixon, he was the only candidate who publicly commented on the events surrounding MLK’s arrest at Rich’s. Vandiver informed JFK that he did not know if he would be able to help, but he would see what he could do.” 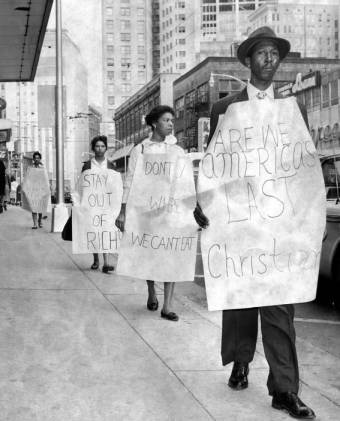 After the arrests, demonstrators marched outside Rich’s. Courtesy of the Digital Library of Georgia

He continues: “Upon MLK’s release from prison on a $2,000 bond at 3:46 p.m. on October 27, Martin Luther King Sr. (MLK’s father) and others within the older black guard of Atlanta decided to change political sides and vote for JFK, despite being a Catholic, instead of Nixon; MLK, however, remained neutral. The Kennedy campaign, on the other hand, seized the opportunity provided by the events and created a pamphlet, ‘”No Comment” Nixon Versus a Candidate with a Heart, Senator Kennedy: The Case of Martin Luther King,’ also known as the ‘blue bomb.’ This pamphlet touted JFK’s involvement in the events surrounding MLK’s incarceration.

“On November 6, the Sunday before the presidential election, approximately two million of the pamphlets were distributed to black churches across the country with the hopes that they would spur blacks to the voting booth. They did just that. On November 8, more blacks voted than had four years earlier. As a result, JFK defeated Nixon by an extremely narrow margin — only eighty-four electoral votes.”*

Learn more about this tour, free to the public thanks to the support of Georgia Humanities, and other programs at the Breman Museum here.

Jeremy Katz holds a B.A. degree in history from Ohio State University and an M.A. degree in Archival Science from Wright State University. His involvement in the Jewish community includes work at the Columbus (Ohio) Jewish Historical Society, the Jewish Federation of Greater Dayton, and most recently the American Jewish Archives. In 2013 he joined the archives team at Breman Museum, where he has been working to grow, preserve, and increase access to the Cuba Family Archives for Southern Jewish History.

Previous Article
Waving the flag by Kelly Jordan
Next Article
Two movies bad enough to walk out: ‘The Comedian’ and ‘A Dog’s Purpose’