The World Affairs Council of Atlanta will have a new president on Jan. 1 — Rickey Bevington, a senior correspondent with Georgia Public Broadcasting.

Bevington will succeed Charles Shapiro, who is retiring from the Council at the end of the year after serving in that role since 2014.

The Council is a nonpartisan membership organization with a vision to inspire Atlanta to lead globally. It is affiliated with Georgia State University, and Bevington will serve as an executive in residence at GSU’s J. Mack Robinson College of Business. 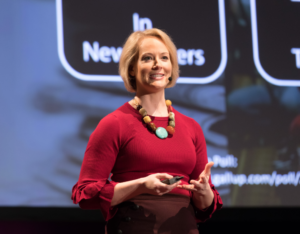 Bevington has significant international expertise through her work as a member of the Council on Foreign Relations’ Local Journalists Initiative, the German Marshall Fund, Climate Action Women, the French-American Foundation, and the Georgia Council for International Visitors among other organizations.

“Rickey Bevington possesses a broad global understanding that prepares her well to be the next president of the World Affairs Council,” said Dennis Lockhart, retired president and CEO of the Federal Reserve Bank of Atlanta who co-chaired the Council’s presidential search committee and served as its inaugural chair in 2010. “Her experience as a journalist will be invaluable as the Council moves forward with the digital content and outreach strategies developed during the pandemic.”

In a text sent Tuesday evening, Bevington said her career has been guided by a simple mission statement: “To empower people with information.” She says that’s what she’ll continue to do serving as president of the Council and teaching at GSU.

“My goal will be to equip Atlantans with the knowledge and network to lead globally,” Bevington wrote.

During her 15 years at GPB, Bevington has held leadership positions both on and off the airwaves. As host and executive producer of multiple television and radio programs, her work was recognized with two Emmy Awards.

She regularly moderates candidate debates for the Atlanta Press Club and moderated the World Affairs Council’s International Women’s Day events between 2016 and 2020. Bevington holds a B.A. from Barnard College of Columbia University.

“On top of excelling as president of the council, Rickey’s perspective will enrich our academic environment in numerous ways,” said Richard Phillips, dean of the Robinson College of Business.  “We look forward to having her champion Robinson and Georgia State students. We also are excited to support her efforts to advance the development of early-career professionals in the World Affairs Council Young Leaders, whose members are under 35 and keen to become more globally aware and connected.”

The mission of the World Affairs Council is to provide a forum for informed discussion of the global affairs that impact metro Atlanta and to support the city’s transformation into an international economic hub.

“As citizens of the world develop deeper conversations and collaboration on shared challenges ranging from climate change to public health to our economy, there’s never been a more pivotal time for Atlanta to embrace its position as a global leader,” Bevington said. “I’m excited to hit the ground running in 2022.”