A new way to measure time is coming to Atlanta. (Photo by Ethan Payne, film produced by the South Fulton Institute)

If you need to know the time, where do you look? Likely your phone, maybe a watch or even the clock on the microwave. But what if we instead centered our concept of time around natural indicators from the outside world? 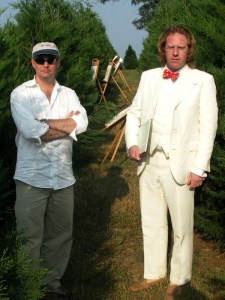 Andrew Dietz (left) and Jonathon Keats (right) during their first project, where the pair let cypress trees do the drawing. (Photo courtesy of Andrew Dietz)

Thanks to a large-scale project by artist and experimental philosopher Jonathon Keats, author and creative coach Andrew Dietz and the folks at Flux Projects, Atlantans will soon have access to a different type of timekeeping.

Called the Atlanta River Time project, Keats will create an intricate clock to tell time based on the flow of the city’s rivers, including the Chattahoochee, South and Flint River. Using the rivers as a reference point, the passage of time will ebb and flow as the water does. Keats calls this “River Time.”

Keats and Dietz have collaborated on several projects, including an initiative called Agrifolk Art, and Keats was featured extensively in Follow the Meander, a book written by Dietz.

These works argue that humans have become wrapped up in urgency and deadlines, ultimately detaching us from our surroundings. Keats describes our society as highly “denatured,” meaning we’re becoming increasingly disconnected from the natural environment.

“Time is of the essence; we are constantly pressed,” Keats said. “We also have turned time and timekeeping into a tool by which to take control of the planet.”

That’s especially true in Atlanta, a city with infamous traffic jams and one of the world’s busiest airports.

“Most cities are founded and built on rivers,” Dietz said. “Ours was built away from the river, on a railroad. Now, in a sense, around the airport. Both of which are about ETA, ‘get there quick,’ and ‘get there on time.’”

That’s why the duo has set out to establish a new kind of timekeeping, to create a system where we use nature to inform our own lives rather than dismissing these natural indicators.

The process to build a clock like this is a long and complicated one — even with the help of master clockmaker Phil Abernethy — so it won’t be installed for another year or so. Once completed, the team envisions installing it somewhere like Piedmont Park or Centennial Yards. 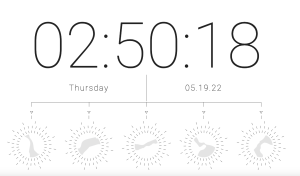 The digital clock will be similar to this one, which is part of another venture by Keats called Alaska RiverTime. (Photo courtesy of The Anchorage Museum)

In the meantime, the team is working on a digital clock, available on a website launching soon, which will keep time using data from U.S. Geological Survey sensors and an algorithm crafted under Keats’ guidance. Once released, folks can connect their devices to keep time based on the tempo of the Chattahoochee River.

And Keats has ambitious goals for River Time. He’s the consulting philosopher for the Earth Law Center, where they’re working on legislation to recognize River Time as a legal time standard.

“[The goal is] not necessarily overriding time as we currently reckon it, but also providing an alternative that can coexist with that,” Keats said. “Then let’s also use it as a way in which to draw people out into the environment around them.”

To help bring the Atlanta community together, the team is enlisting local creatives to hold community performances, where the song and dance follow the rhythm of the water flow. Keats hosted a similar event in Anchorage, Alaska, with a quartet playing Antonio Vivaldi’s Four Seasons to the varying pace of Alaska rivers.

The project will also include erosion calendars placed by the city’s rivers and tributaries to keep track of time based on the rivers’ natural flow. 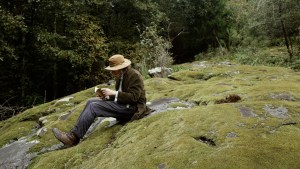 “[Atlanta] has always run on railroad time but it doesn’t really have to be that way,” Keats said in a short film. “We are part of nature, not apart from it.” (Photo by Ethan Payne, film produced by the South Fulton Institute)

Keats will inscribe each stone with a date following increments of 25 years, and when a stone is worn smooth, that period has passed.

“It’s a matter of taking what is happening now and extrapolating that into the future naively,” Keats said. “Then allowing the future as it comes to pass, to tell us what is happening in the world. Ideally, it would calibrate us in terms of how we act in response to that time signal.”

That’s another key component here, Keats and Dietz emphasized, to get more Atlantans connecting with not only the oases of nature around the city but also their neighbors.

“In the way that the BeltLine is connecting communities, our waterways have the opportunity to do that as a sort of fluvial BeltLine,” Dietz said.

Keats added, “The watershed transcends so many of the divisions in terms of neighborhood, divide in class, race, and all the other ways the city has been partitioned historically. This project very much emerges out of a deep conviction and the importance of environmental justice, social justice, racial justice. These are not separate and parallel, and you cannot separate one from the other.”

Click here to learn more about the project bringing River Time to Atlanta.

Previous Article
It was the country’s first, but it didn’t last
Next Article
SCAD students work together to help revitalize Sweet Auburn District bakery