In June 2022, Rodney Bullard and Dan Cathy talk about the Beloved Benefit with Benjamin Earley at the Westside Future Fund's breakfast meeting. (Photo by Maria Saporta.)

The Beloved Benefit, championed by Chick-fil-A’s Dan Cathy, is shifting to a new entity called “The Same House.”

Rodney Bullard, who announced in December that he would be stepping down as executive director of Chick-fil-A Foundation on Dec. 31, will be the CEO of The Same House. 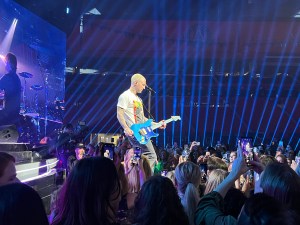 Adam Levine of Maroon 5 performs at the 2022 Beloved Benefit. (Photo by Maria Saporta.)

Bullard, in an exclusive interview Wednesday afternoon, explained the name, the purpose and the scope of The Same House.

Bullard helped organize the Beloved Benefit in 2019 and 2022 (the concert event wasn’t held during the height of the Covid pandemic), which raised more than $5 million the first year and about $6.5 million last year.

For the past 12 years, Cathy and Bullard have focused much of their philanthropic efforts on revitalizing the west side of Atlanta. Many of the organizations that have benefited from the event’s proceeds serve Westside communities, especially Vine City and English Avenue.

At Thursday night’s dinner, Bullard is expected to announce the major performer who has been lined up for the 2023 Beloved Benefit to be held Aug. 24 at the Georgia World Congress Center. Bullard also plans to announce the nonprofits that will be the beneficiaries of the money raised.

“The purpose of the Beloved Benefit is not just to raise money; it’s not just to give away money, but it’s also to bring people together into the same space where they can connect with one another and to allow others to know about what’s going on in our community and the needs of our neighbors,” Bullard said. “We had this event, but we needed an actual movement.”

The Same House will have twin goals – a social goal and an economic goal.

Life expectancy in English Avenue is about 64 years old while in Buckhead, it’s 87 years old, he added.

“The social goal is to build bridges between communities and to bring people together,” Bullard said. “Then on an economic standpoint, economic mobility, in our estimation, is at the root of many of our issues… We will continue to focus on economic mobility and three bucket areas: education, employment, and entrepreneurship.” 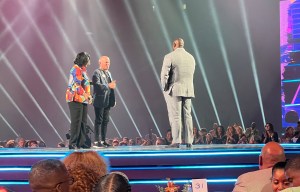 Money raised for the Beloved Benefit will continue to be made to the Community Foundation for Greater Atlanta, so they will be tax deductible. Bullard said The Same House’s organization, including its board, is still being developed.

Cathy and Bullard have previously talked about having national aspirations to take the Beloved Benefit model to other cities.