With roots in the past, new CEO of Cox Enterprises faces future 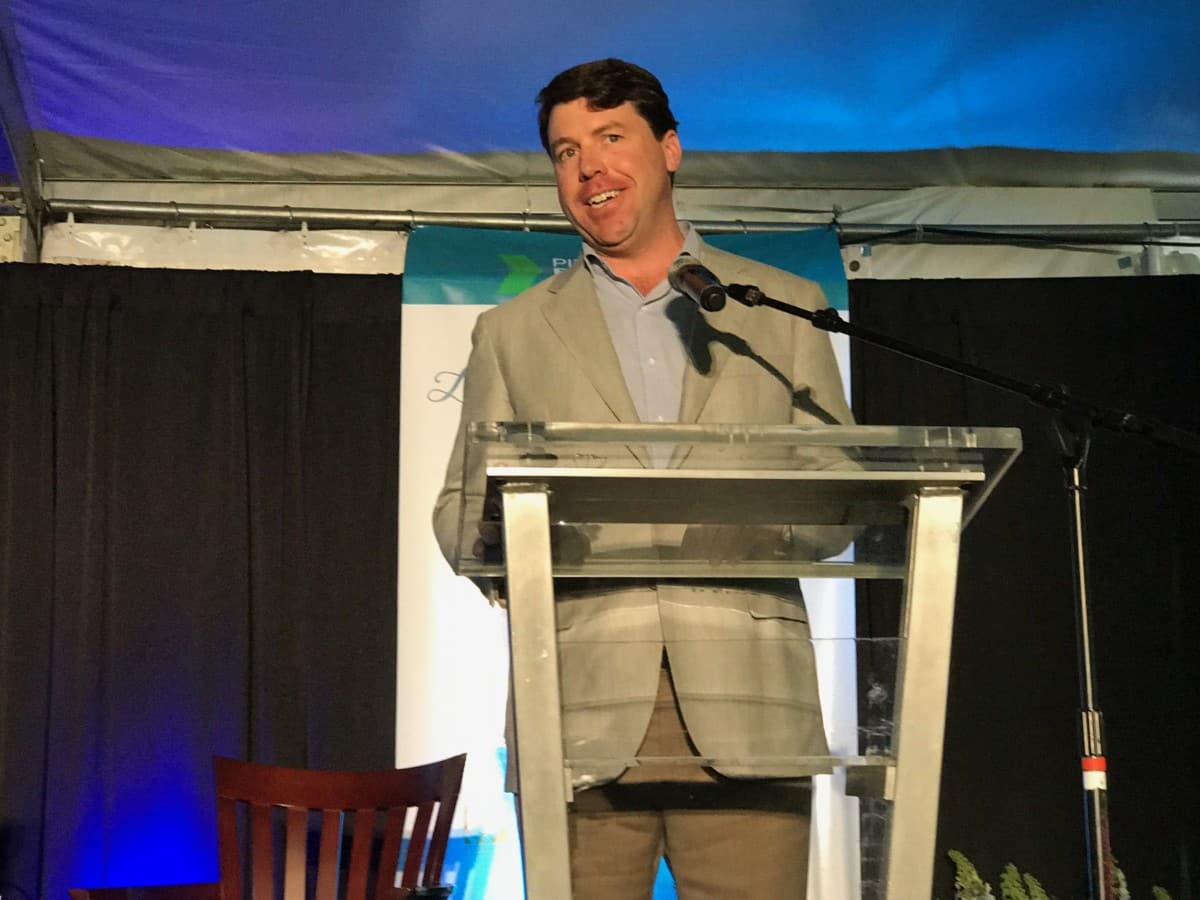 By Maria Saporta and Ellie Hensley
As published in the Atlanta Business Chronicle on May 12, 2017

The fourth generation of the Cox family soon will be leading Cox Enterprises Inc., the largest privately-owned company in Georgia.

Alex Taylor, 42, the great-grandson of the company’s founder, will become the company’s CEO on Jan. 1, succeeding John Dyer, who has been with the company for 40 years.

Taylor and Dyer sat down with Atlanta Business Chronicle on May 8 at the headquarters of Cox Enterprises to talk about the transition in leadership and the future of the business. 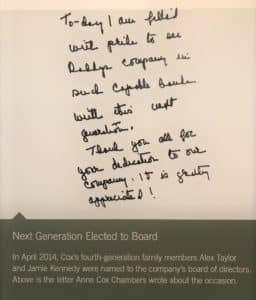 Few family-owned companies survive to a second generation, much less a fourth, but the sense of family pride was ever-present during the interview.

The family matriarch – Anne Cox Chambers – reinforced that in 2014 when Taylor and his cousin, Jamie Kennedy, joined the company’s board.

“Today I am filled with pride to see Daddy’s company in such capable hands with this next generation,” she wrote in a hand-written note that is framed and part of company’s historic display at the headquarters.

Initially, Taylor had no plans to join the family business.

“I wanted to start a fly fishing company,” Taylor said. “It was always sort of feeling the desire to do your own thing, be your own man.”

“I thought to myself, all the work that’s gone into the last hundred years to present this opportunity,” Taylor said. “I felt a sense of responsibility to not just give back, but take it and run with it rather than just be a beneficiary of it.”

As Taylor saw it, the evolution of Cox Enterprises had been extraordinary, not just because of his family but for all the teammates who had worked for the company since 1898 when it only owned one newspaper – the Dayton Daily News – to a $20 billion company with 60,000 employees. 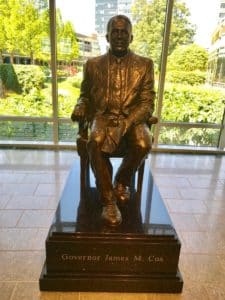 A stature of Gov. James Cox – founder of the company – is on display in the lobby of Cox Enterprises (Photo by Maria Saporta)

So Taylor went to his uncle – James Cox Kennedy, the company’s CEO at the time – offering to enter the family business.

“I think I’m going to send you out to a newspaper,” Kennedy told Taylor, who started his career as a reporter at Grand Junction Daily Sentinel in Colorado. “Being a newspaper reporter is the best training you can have for business because it teaches you how to ask the right questions.”

Over the past 17 years, Taylor held numerous jobs at Cox, one of which was an classified auto ad salesman for the Atlanta Journal Constitution.

“It was always, ‘let’s get Alex into roles of increasing responsibility and make sure he succeeds,’” Dyer said. “He’s done a phenomenal job of readying himself. And it really is great to be turning the reins of the company back over to a fourth generation family member. Just think of how few, what small percentage of, enterprises are even owned by the fourth generation, let alone owned and run by the fourth generation. It’s just a remarkable, remarkable company.”

“This is our hometown, and we do things here that we don’t do everywhere,” Taylor said. “We have never been more committed to Atlanta.”

For decades, newspapers were the company’s core business. As late as 1985, the newspaper division generated nearly half of the company’s total revenue. Cox’s flagship paper, the Atlanta Journal-Constitution, continued to do well through the 1990s. 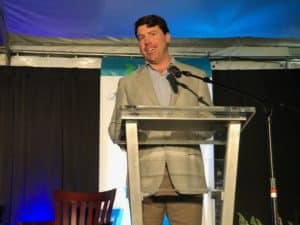 Since then, both the media industry and Cox Enterprises have undergone dramatic shifts as digital media have sucked vast numbers of advertising dollars out of newspapers, broadcast television, radio and cable. Alphabet Inc. (which operates Google) was founded in 1998, and its advertising revenues soared from nearly $60 billion in 2014 to almost $80 billion last year. Facebook, founded in 2004, saw its advertising revenues more than double from $11 billion in 2014 to almost $27 billion last year.

Cox’s cable communications business accounts for about $11 billion out of its $20.1 billion in revenue; the automotive division accounts for nearly $7.3 billion; and its media division (including newspapers, television and radio stations) represents $1.8 billion.

When it comes to earnings, Dyer said the newspaper division (now four major dailies) doesn’t even represent 2 percent of the company’s business.

But that doesn’t mean they aren’t important. During board meetings, each division gets equal discussion time.

“The company’s bigger than it’s ever been as a result of all the things that journalism and media built,” Taylor said.

Case in point, one of the company’s more profitable business – Autotrader – grew out of the Atlanta Journal-Constitution by executives who could see the business trending away from newspaper classified ads. 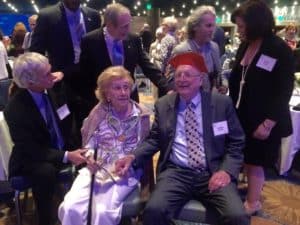 Cox’s automotive branch is booming, thanks in part to low interest rates. With self-driving cars on the horizon and millennials gravitating away from car ownership, the future of the auto business is uncertain, but Taylor is confident the company will find new “service opportunities” as the market changes.

“The more autonomous vehicles there are, the more miles will be driven on the road,” Taylor said. “We don’t look at it as the end of automotive business. We look at is a big change that, if we’re the leader in the industry or a services leader, we’ll be well poised to adapt to a new world.”

By 2008, the AJC was losing an average of a million dollars a week, and that was not sustainable, so executives embarked on a major restructuring of the business.

“This is not a nonprofit. And we’re not doing it as a community service,” Taylor said. “We’re doing it because it plays an important role in where we do business.”

But Taylor continued: “If they begin to lose money for the long term and they’re never going to make money again, it’s not something that we’re going to continue burning our shareholder’s capital on. But they’re not losing money.”

Asked if he could see a day when the company would be out of the newspaper and media business, Taylor responded “not in the immediate future.” 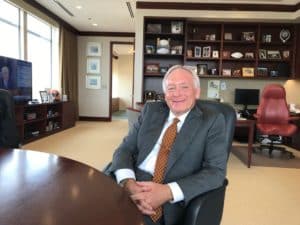 “In the long term future, the goal of Cox Enterprises is to continue to grow and diversify,” he said. “The family is united in putting the vast majority of the money that the company makes back into the business and looking for growth opportunities. And that’s what we’ll continue doing. If there’s ever a time when a business is better off in somebody else’s hands, I hope that we’ll always recognize that and be willing to leave a business if it’s no longer good for the business or for us to have it. In the immediate sense, we’re not getting rid of Cox Media Group.”

Though newspapers are no longer the financial core of the company, they have a deep-seated bond within the Cox family.

“If core is part of the heart and the soul of who we are, selling our newspapers would be a very emotional decision and one that we would avoid for a very long time,” Taylor said. “We love newspapers, we love newspapering even more than the actual newspapers. We love the business of journalism. We think it’s important to a community. The city of Atlanta without the AJC would be hard to imagine.”

Dyer added, “We’ve got to do our part to make sure that journalism is alive and well in this city and in our nation. I know we do our part. And I think we’ll continue to do that, because that’s just the roots of who we are.”