Rotary International, Bill Gates and other global partners pledge another $1.2 billion to efforts to end polio 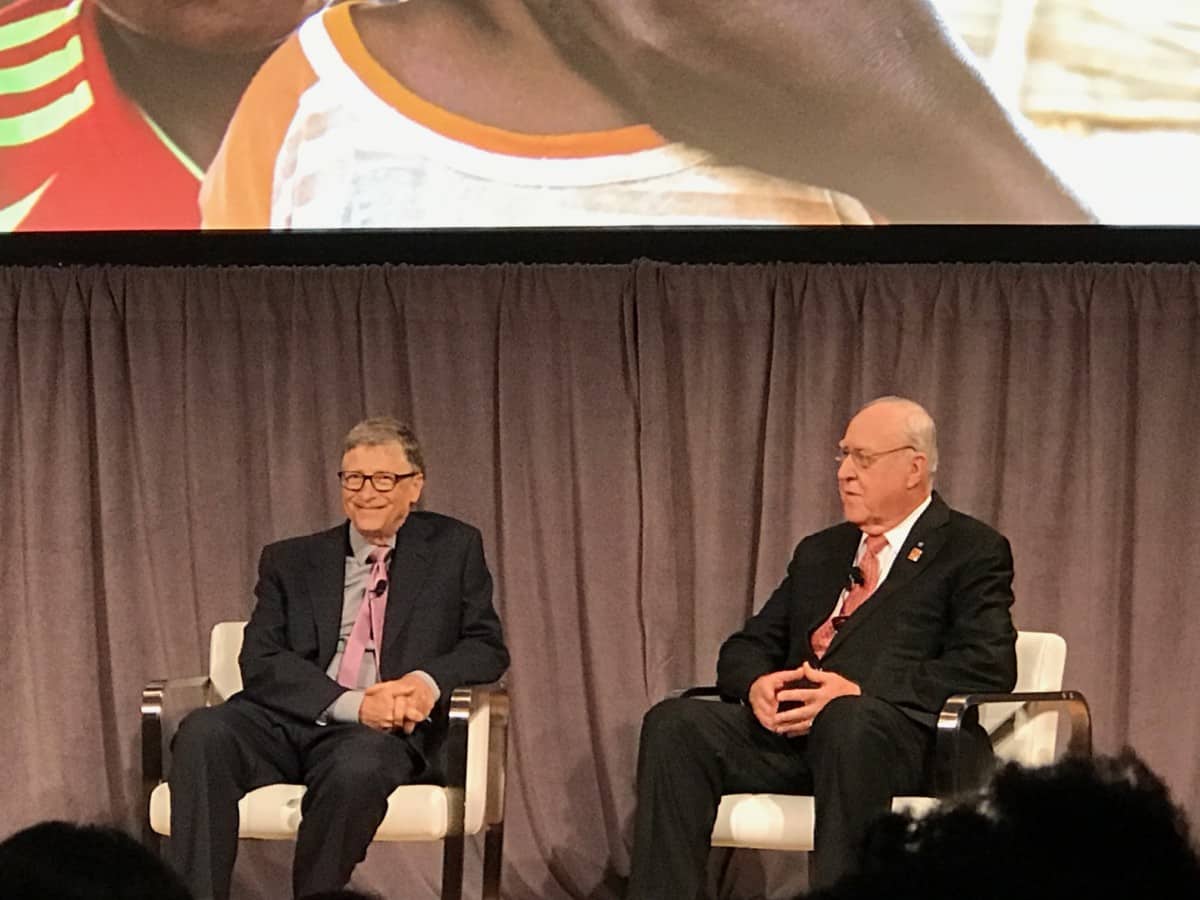 “End Polio Now” was the rallying cry at the 108th convention of Rotary International – bringing nearly 37,500 Rotarians to Atlanta from Sunday through Wednesday.

Led by Rotary International and Bill Gates of the Bill and Melinda Gates Foundation, the global health partners meeting in Atlanta reaffirmed their commitment to ending the disease by pledging an additional $1.2 billion to the cause.

Rotary made a pledge to raise $50 million a year for three years. And Bill Gates announced he would match Rotary’s contribution two-to-one – meaning their partnership would provide another $450 million to fight the last vestiges of the debilitating disease. 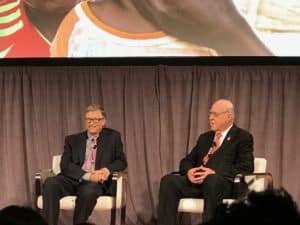 Gates went on to say that three decades ago, polio was everywhere. In 1994, the Americas were certified as polio free. In 2000, the Western Pacific region as certified as polio-free followed by Europe in 2002. Southeast Asia, including India, was declared polio-free in 2014.

And in 2017 so far, only five new cases have been identified in three countries – Pakistan, Nigeria and Afghanistan.

Representatives from the three countries pledged to continue fighting polio in their nations until there were no cases left. In order to declare that polio has been eradicated, the world will need to go three years with no new cases.

Rotary began fighting polio in 1988 when 350,000 polio cases in 125 countries were being identified each year. 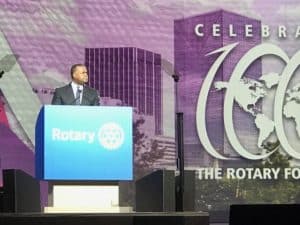 Mayor Kasim Reed welcomes up to 37,000 Rotarians to Atlanta

“Since the year 2000, more than 10 billion doses of oral polio vaccine have been administered by an army of 20 million volunteers and a global team of thousands of frontline health workers,” Gates said, adding that the most important statistic to him is that “16 million people are walking today who would otherwise have been paralyzed by polio.”

Gates joined forces with Rotary in 2007 to step up the global efforts to fight polio, and one question haunts him. Why has it taken so long to eradicate the disease? The original goal was to eradicate polio by 2000.

“Polio has been my top priority for a decade now,” Gates said. “I think we’d all agree this has been harder than any of us expected…. Eradication means zero cases. All 7.5 billion people on the planet. Across all 200 million square miles. No polio. That includes areas where there is war. It includes countries where public health systems are virtually non-existent. It means reaching children in the most inaccessible places on earth – not just once, but many times to ensure they’re protected.”

Gates added that Rotary’s efforts to fight polio is not only getting rid of one of the worst diseases in history. “You also are helping the poorest countries provide their cities with better health and a better future,” he said. And getting to zero is incredibly inspiring as an achievement of humanity.”

While some people may believe the world is getting worse, Gates said the progress on polio is a reminder of what people can accomplish when they are bold, determined and willing to work together. 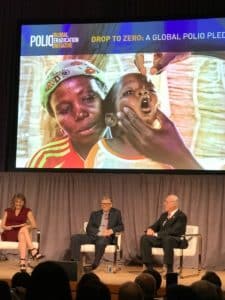 Before the general session, there was smaller gathering held by and for top donors to the cause – called the “Pledging Moment” Gates, Rotary International President John Germ and numerous other partners announced they would renew their commitments.

“Earlier this morning, representatives from donor countries pledged to support the final push on polio,” Gates said. “It was great to see Canada, Japan, Germany, Australia, the European Commission and His Highness Sheikh Mohamed bin Zayed from the United Arab Emirates stepping up with new pledges. I’d also like to acknowledge the United States – the largest government funder of the Global Polio Eradication Initiative.”

The effort to eradicate polio is an example of the importance of foreign aid.

“We could cut childhood deaths in half again by 2030 if governments continue to invest in things like vaccines, maternal and newborn health and HIV prevention and treatment,” Gates said.

“This is what breaks the relentless cycle of disease and poverty in low income countries; and that is what enables countries to prosper,” Gates added. “Yet some in Washington, D.C. are talking about deep cuts to foreign aid. These investments amount to less than 1 percent of the U.S. budget, so eliminating them wouldn’t make a dent. But continuing these programs will make a big difference in the lives of millions of children and families around the world. 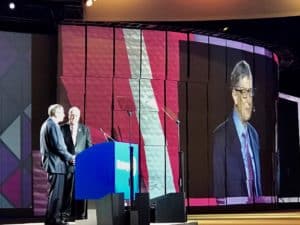 Rotary International celebrated the news of another $1.2 billion being devoted to “End Polio Now.” But it is estimated it will take a total of $1.5 billion to fully eliminate the virus from the remaining three countries and making sure it is prevented from regaining a foothold in other areas in the world. That means there’s still a $300 million gap.

But Rotary and its partners – UNICEF, the World Health Organization, the Bill and Melinda Gates Foundation and the Atlanta-based U.S. Centers for Disease Control and Prevention – have formed the Global Polio Eradication Initiative to work collaboratively to remove the disease from the plant.

“Constant innovation has been key to improving vaccination coverage and reaching more children with the polio vaccine” said Dr. Anne Schuchat the CDC’s acting director. “The unrelenting commitment and support of these global leaders will help us do just that – and ultimately end this disease for everyone and forever. CDC remains deeply committed to polio eradication and has contributed $2.28 billion since the beginning of the initiative.”

Rotary is meeting in Atlanta on the 100th anniversary of the Rotary Foundation. The foundation was launched in 1917 – the first time Rotary held its annual convention in Atlanta in what was then the Baptist Tabernacle just a few blocks away from where Rotary is meeting at the Georgia World Congress Center. 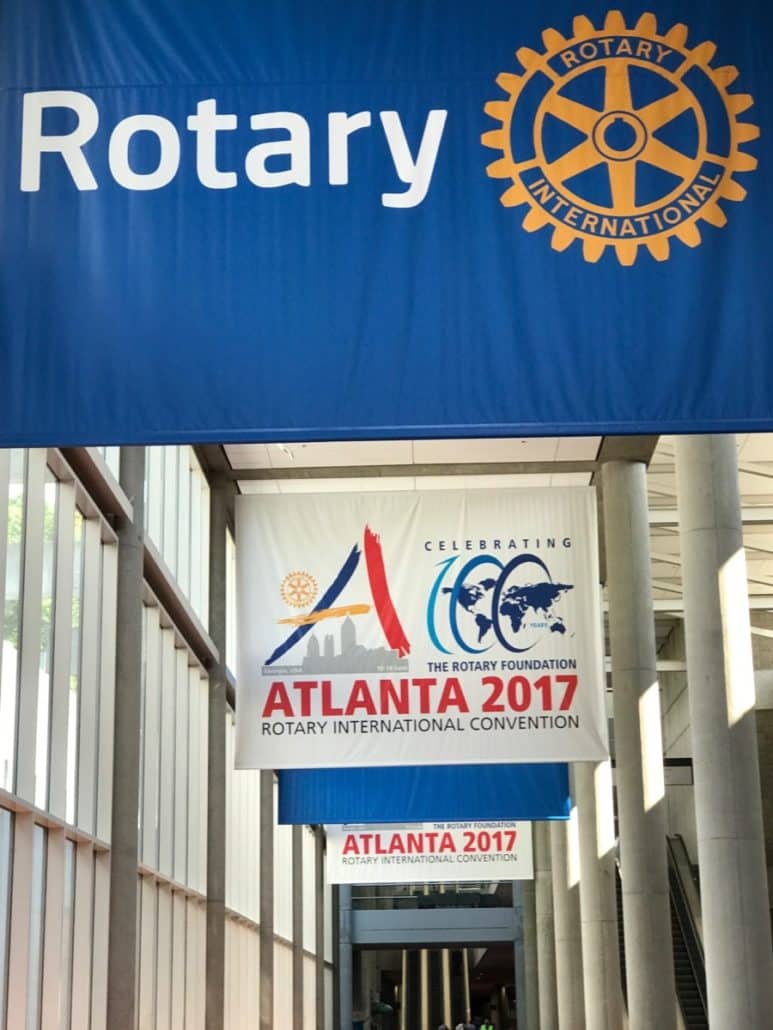