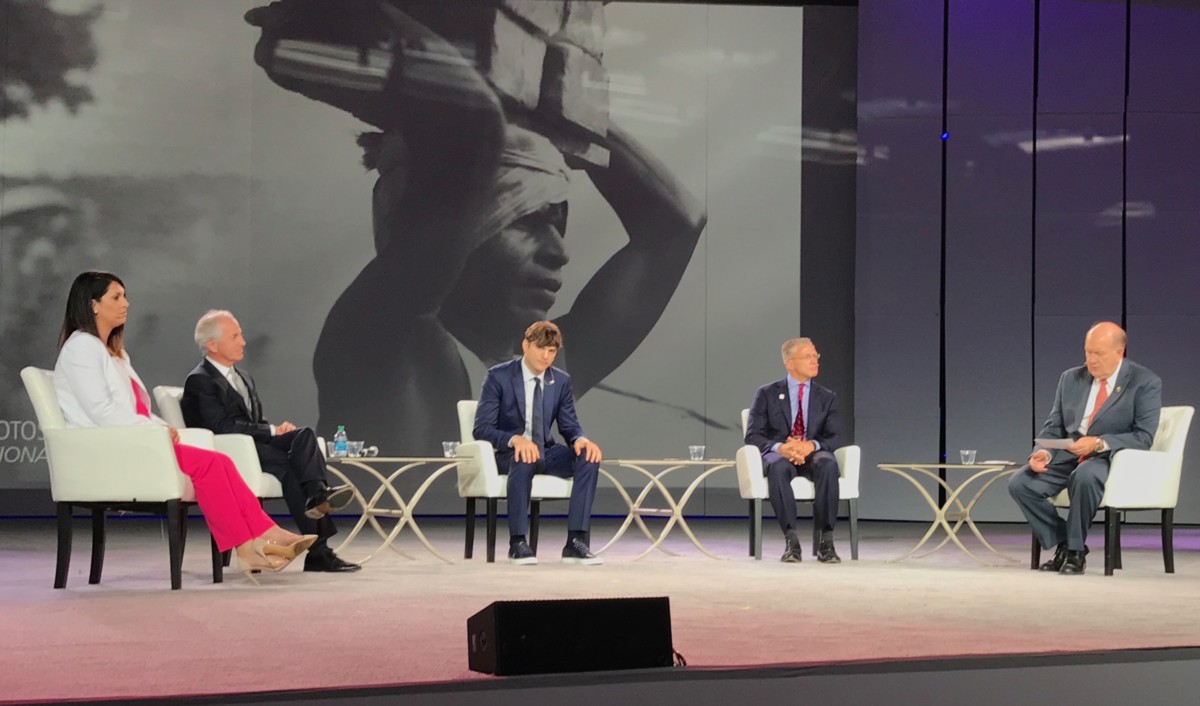 Rotary International raised the spotlight on human trafficking Monday at its 108th convention underway in Atlanta.

After a morning devoted to the initiative to eradicate polio, the nearly 37,000 Rotarians attending the conference from all over the world listened to ways it can help fight modern day slavery.

“Atlanta Georgia is one of the hot beds for sex trafficking in the entire country,” said actor Ashton Kutcher, who has become an active voice to protect women and children from becoming modern day slaves. Kutcher said one can actually “buy somebody” – a fact he said is hard to believe. 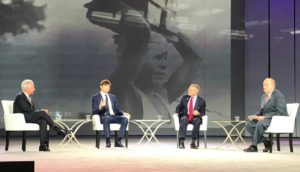 Kutcher was part of the Rotary convention’s panel on “End of Modern Slavery.”

“Our nation has been the leader in ending things,” said U.S. Sen. Bob Corker (R-Tennessee). “Rotary International, look at what you have done with polio. We have Global Fund. The purpose is to create a massive public private put together to create a public private partnership so we can leverage our resources  to do what is necessary to end this scourge.”

Kutcher, through his Thorn Foundation, has been working on technology that will help identify those who believe they can control and mistreat another human being.

“We thought it would be right to create software to identify the victim,” Kutcher said. “We were able to create a database in 12 months, we have been able to identify 6,000 trafficking victims, 2,000 of which were minors.”

“The ultimate goal is to deter behavior,” Kutcher said. “This is about really curbing the appetite.”

Corker said he believes the Global Fund “will bring the world together.”

Gary Haugen, CEO of the International Justice Mission, said that there are more than 46 million people held in slavery around the world – more people than at any other time in the history of the world. About 21 percent of the victims of slave trafficking – which he described as “rape for profit.”

“There is a vaccine to fight slavery,” Haugen said. “One is law enforcement. The other is to provide services to the victims.” 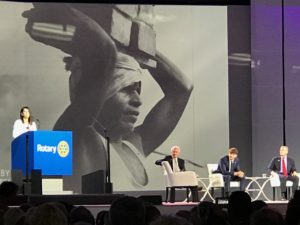 Rebecca Bender, a victim of sex trafficking, tells her story as the panel listens at Rotary convention (Photo by Maria Saporta)

After the panel discussion, Rebecca Bender, a victim who has started her own organization – the Rebecca Bender Initiative, is helping to train law enforcement of how to detect possible victims of sex trafficking.

Bender spoke from her own experiences. As a nearly homeless single mom, she got involved in a relationship with a man who eventually moved her to Las Vegas and started selling her services to male customers.

“I was never kidnapped,” Bender said. Instead, she had vulnerabilities that were quickly detected by her abuser.

Emcee Bob Hope said Rotary can help address this problem. “There are 1.2 million Rotarians,” Hope said. “What can we do to make a difference?”

Bender said it takes training of law enforcement personnel as well as raising awareness about the problem so members of the general public can bring up concerns if something does not look right.

Kutcher called Bender “amazing,” and said he would have given up his seat on the panel. The “inbound pipeline to trafficking is vulnerability and poverty.” People who don’t feel loved often get lured by conniving individuals take advantage of their weaknesses.

“Even though slavery has been with us for every generation,” Hope said, “there’s no reason for us to not end it in this generation.” 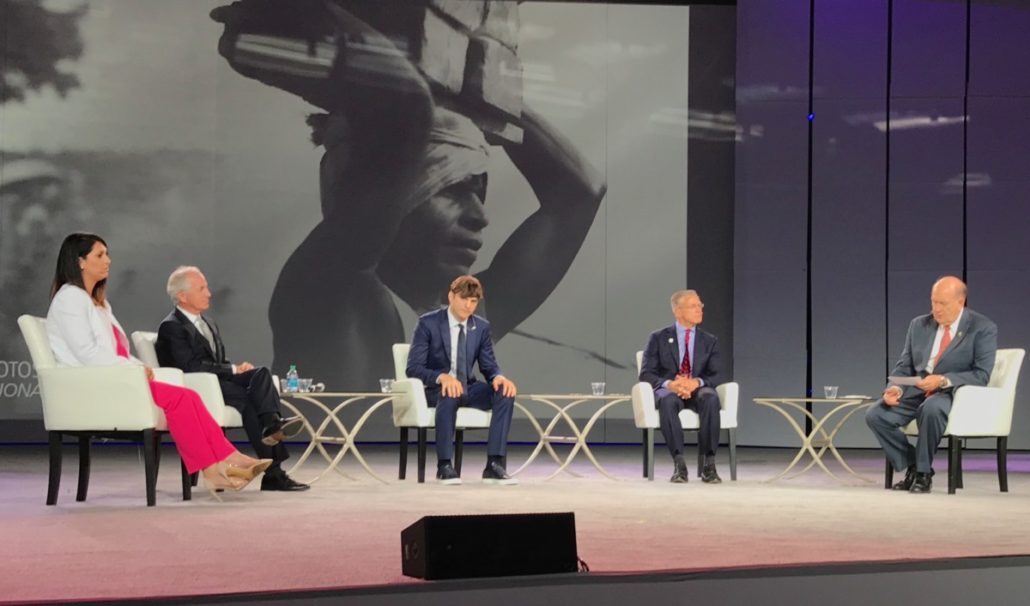 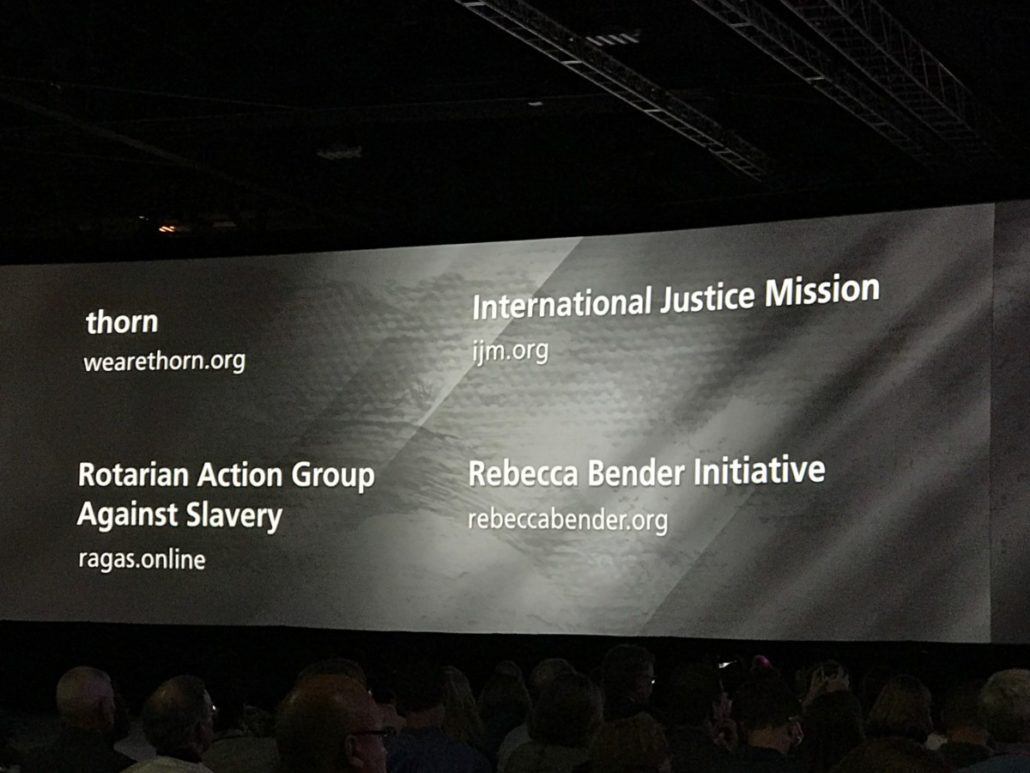