The Olympia building — a historic gem in the heart of downtown Atlanta — is for sale.

The two-story triangular building currently is owned by the State of Georgia — as a result of a $3.6 million gift from the Robert W. Woodruff Foundation in January, 1995 right before the 1996 Summer Olympic Games.

“There’s a significant amount of renovation that needs to be done to the building,” said Paul Melvin, communications director for the State Property Office. “Given our budget restrictions at this time, we thought it was best to sell it.”

The deadline to ask questions and submit a bid to buy the building is noon on Friday, Oct. 12. All official answers to questions received will be posted on the State Procurement Registry website.

Bids will be opened at 2 p.m. on Tuesday, Oct. 23 at the Georgia State Financing and Investment Commission Procurement Services at 270 Washington St. N.W. on the second floor.

The Olympia building was constructed between 1935 and 1936 at 23 Peachtree St. NE at a pivotal corner at downtown Atlanta’s Five Points.

Since 2003, the building also has served as the base of the retro Coca-Cola neon sign that adorns the property that sits between Woodruff Park and Underground Atlanta.

The state conducted an appraisal on the building in April that determined the building was worth $2.45 million. Interestingly enough, the state put the building up for bid within the last 45 days but there were no bidders.

So now the state has decided to rebid the sale of the building — all it needs now is willing buyer. 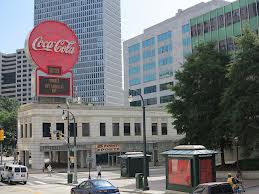 Obviously, the building will require a special buyer — an entity that doesn’t care that there is no parking on the property and one that is respectful of the building’s historic landmark status.

The Olympia building was designed by architects Ernest Daniel Ivey and Lewis Edmund Crook. The Ivey & Crook architectural firm “produced some of this city’s finest architecture in the 1920s,: according to a history of the building. In fact, the firm also co-designed the Crum & Forster building in Midtown, which the Georgia Tech Foundation has been trying to demolish for the past four years.

The site of the Olympia building also has a fascinating history. In the mid-1840s, it was the site of Atlanta’s first post office and general store — housed in a wooden structure that was run by George Washington Collier, the city’s first postmaster.

Collier built on the site three times. In the 1900s, the ground floor of the Collier building was the home of Tom Pitt’s Soda Fountain. Pitts served milkshakes and a lemonade-lime drink and a popular new drink — Coca-Cola.

The current Olympia building was built by Frank Hawkins, who founded the Third National Bank. Hawkins had made money on investments in Olympia Beach, Fla., which is how the building got its name.

The history of Coca-Cola actually can be traced back to Five Points — just feet from the Olympia building.

On May 8, 1886, Dr. John Pemberton, an Atlanta pharmacist, sold the first Coca-Cola fountain drink at Jacob’s Pharmacy at Five Points on Marietta Street.

According to Melvin, Coca-Cola’s 10-year lease for roof-top Coke sign actually runs out in December, and there are no built-in renewals for the space.

Ben Deutsch, a Coca-Cola spokesman, responded in an email that “we will be renewing the lease agreement.” But he had no other details.

The fact that it is not known who the new owner of the Olympia building will be, there is some risk for Coca-Cola, which is thought to have invested millions of dollars to bring the neon Coke sign back to downtown.

So how’s this for an idea?

What if the Coca-Cola Co. were to buy the Olympia building?

The idea is not so far-fetched. For starters, if Coca-Cola were to offer the appraised value of the building, it would break-even on its lease payments within 25 years.

Coca-Cola also could take over much of the ground floor of the building and sell Coke products and memorabilia to the thousands of tourists who walk by every day.

It also could donate the building to any of a number non-profit or civic associations that could use the second floor as office space. That gift could be a tax write-off, while at the same time be a sound business decision.

Among the prospective tenants include Central Atlanta Progress, the Atlanta Preservation Center, the Community Foundation for Greater Atlanta, Atlanta Neighborhood Development Partnership among others.

No matter what, Atlanta has an opportunity to reinvest in one of its most historic structures — the Olympia building. Let’s hope that Atlanta is able to develop a solution that works out best for everyone.