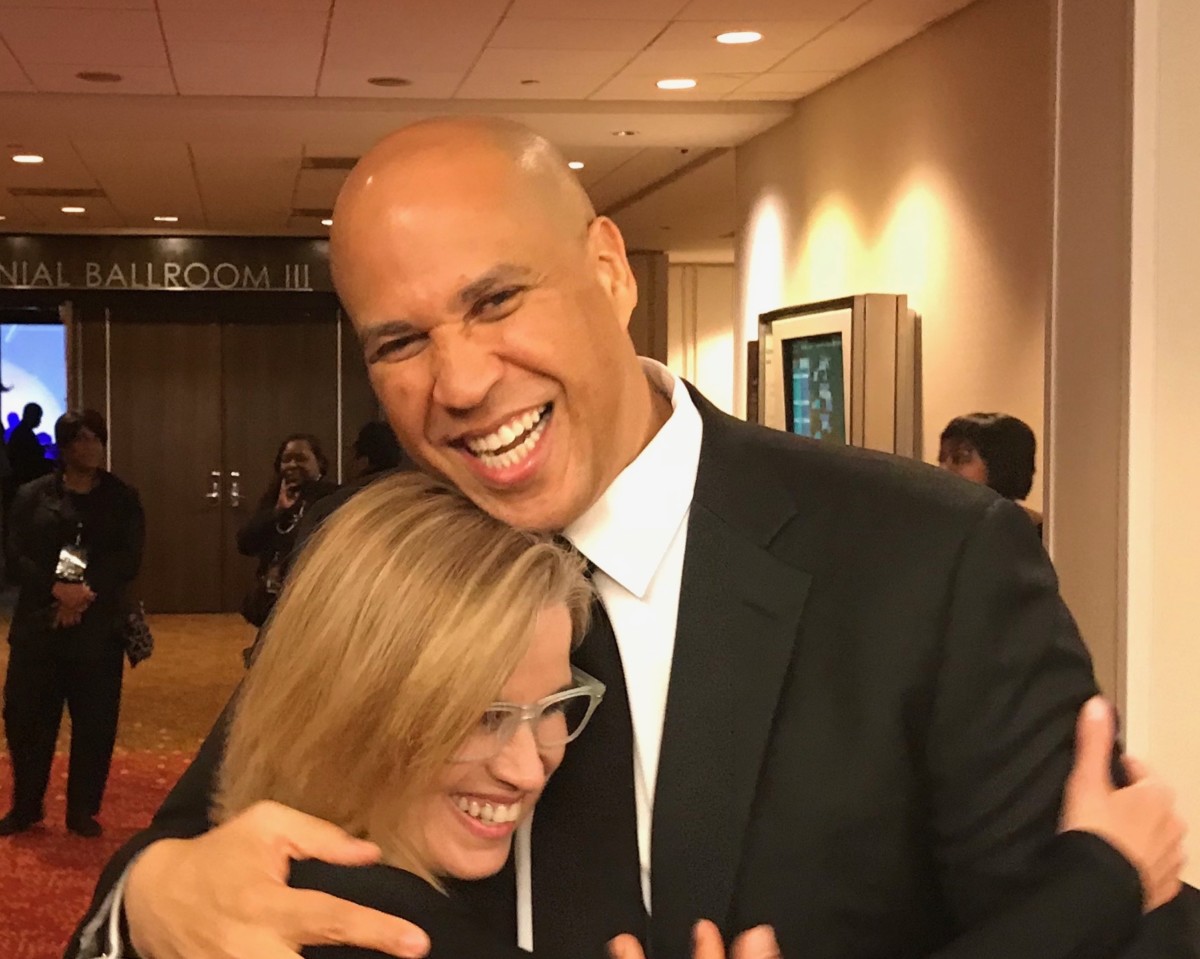 Although he didn’t attend the Salute to Greatness dinner on Jan. 13, President Donald Trump was certainly on the menu.

The Salute is the major fundraising event for the Martin Luther King Jr. Center for Nonviolent Social Change (better known as the King Center), and it is held every year at the Hyatt Regency Atlanta. 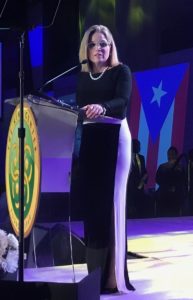 It is the second year in a row that Trump influenced the night’s event. In 2017, then President-elect Trump had lashed out at U.S. Rep. John Lewis (D-Atlanta) for saying he would skip the presidential inauguration.

“Congressman John Lewis should spend more time fixing and helping his district, which is in horrible shape and falling apart, not to mention crime infested, rather than falsely complaining about the election results,” Trump had written in a pair of twitter messages. “All talk, talk, talk – no action or results. Sad!”

Predictably, almost everyone at the dinner challenged those comments.

And 2018 was no different – after a year full of Trump tweets and comments.

Remember Hurricane Maria that hit Puerto Rico in mid-September. When San Juan Mayor Carmen Yulin Cruz criticized the federal government for not providing more relief to the island that is part of the United States, Trump accused her of “poor leadership” and suggested that Puerto Ricans were not doing enough for themselves. He went on to say that Cruz had “been told by Democrats that you must be nasty to Trump.”

At the 2018 Salute to Greatness dinner, Mayor Cruz received a “Special Recognition for Humanitarian Leadership” – receiving an enthusiastic welcome by the attendees.

“My people are still dying while others play golf,” Cruz said, in an obvious reference to Trump. “We are trying to survive.” 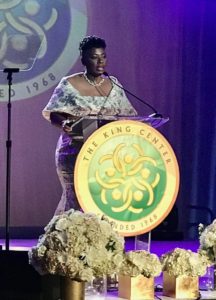 She went on to say that one million Puerto Ricans are still without power – nearly four months after the hurricane hit.

And she picked up on Trump’s “nasty” comment by saying: “Sometimes you have to be nasty to be heard.”

Another major honoree of the evening was U.S. Senator Cory Booker (D-New Jersey). who received the Salute to Greatness award.

Booker credited Bernice King, CEO of the King Center, for keeping the flame of her father – Martin Luther King Jr. – alive. King would have been 89 today had he not been assassinated 50 years ago on April 4. The King Center began a few months after his death by his widow – Coretta Scott King.

Booker also paid special tribute to former Atlanta Mayor Andrew Young (who had introduced him at the dinner) and Rep. Lewis – saying that his accomplishments paled in comparison to what they had done.

“My generation – we have inherited so much from you,” Booker said. “You marched for us. You died for us.” 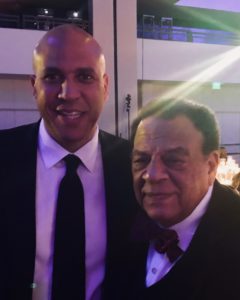 “My father said: ‘I worry about our nation,’” said Booker, implying that his father foreshadowed today’s state of affairs with mass incarceration and a black-white wealth gap that is greater than it was in 1992.

“The leading cause of death of black men is murder,” Booker said. “We have not fulfilled the legacy of King.”

Booker also has played and is playing a role in Atlanta and Georgia politics.

Atlanta Mayor Keisha Lance Bottoms told the Salute to Greatness attendees that Booker had helped make the difference in her campaign. Before his endorsement and campaign appearance, Bottoms said she was behind six points in the poll. She thanked Booker for his role.

Saying we must be the change we want to be in the world, Booker also quoted Coretta Scott King.

“In this nation, nothing is given,” Booker said. “Every generation must earn its freedom.” 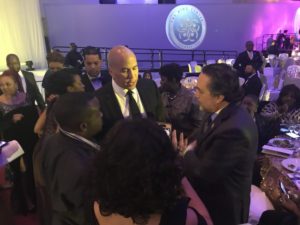 And with apparent reference to the nation’s top leadership, Booker said those words ring true today.

“We as a country must know that the opposite of justice is not injustice. It’s silence,” Booker said. “We must remember that patriotism is love for our country. You can’t lead the country if you don’t love it’s people.”

Then Booker said we must not turn the memory of King into a black Santa Claus.

“He said things that were uncomfortable,” Booker said, adding that King had become unpopular in certain corners during the last year of his life because he was challenging poverty, economic injustice and the Vietnam War.

And then Booker closed with an unveiled criticism towards Trump’s most recent comments towards immigrants in a closed door meeting saying we should not want people coming from “shithole” nations in Africa and Haiti, and why couldn’t we have more immigrants from Norway, which is predominantly a country of white residents.

“We will not turn our back on refugees,” Booker said. “But we will welcome them with open arms.” 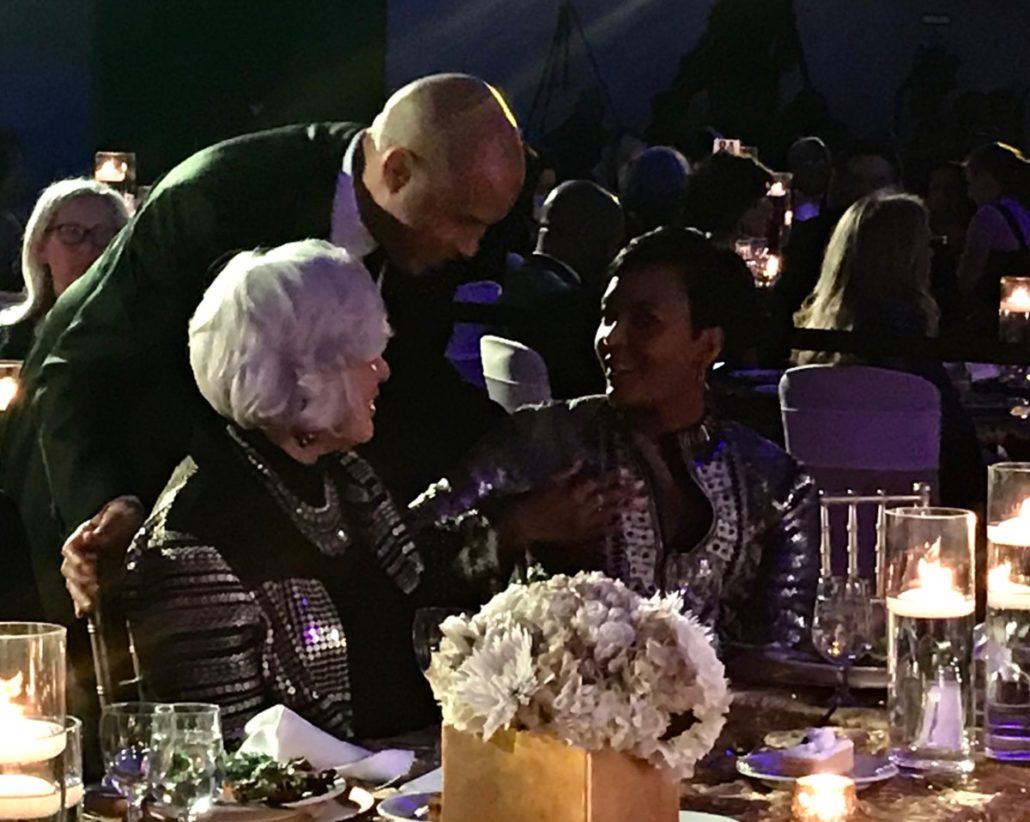 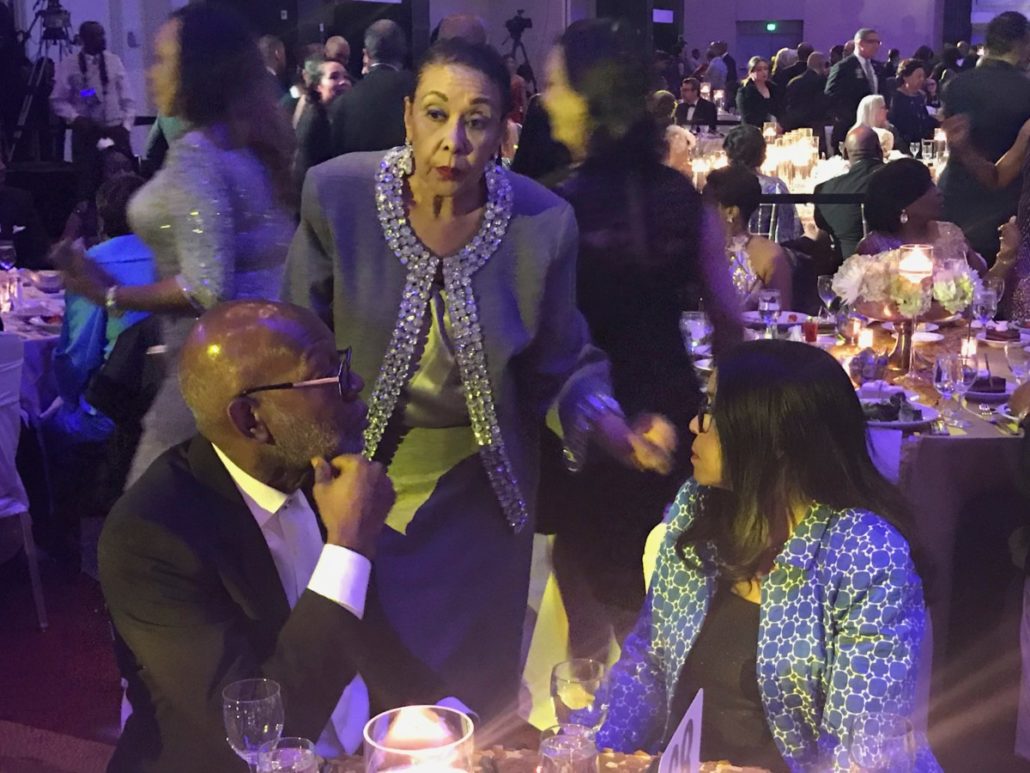 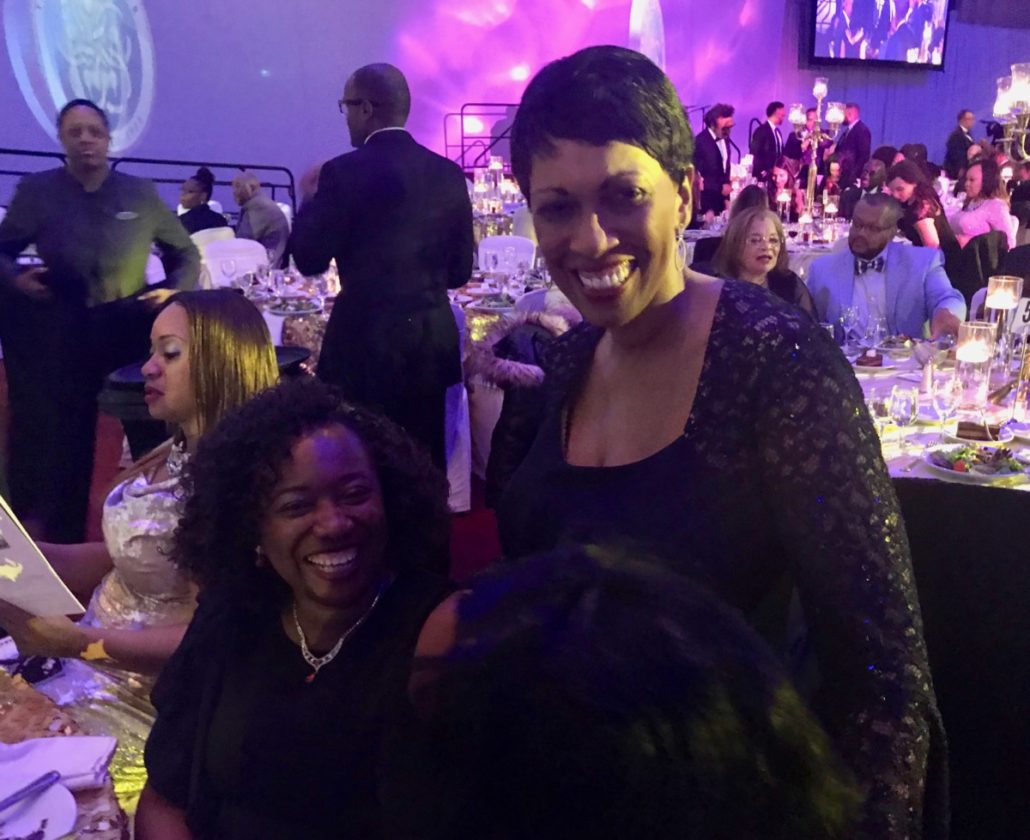 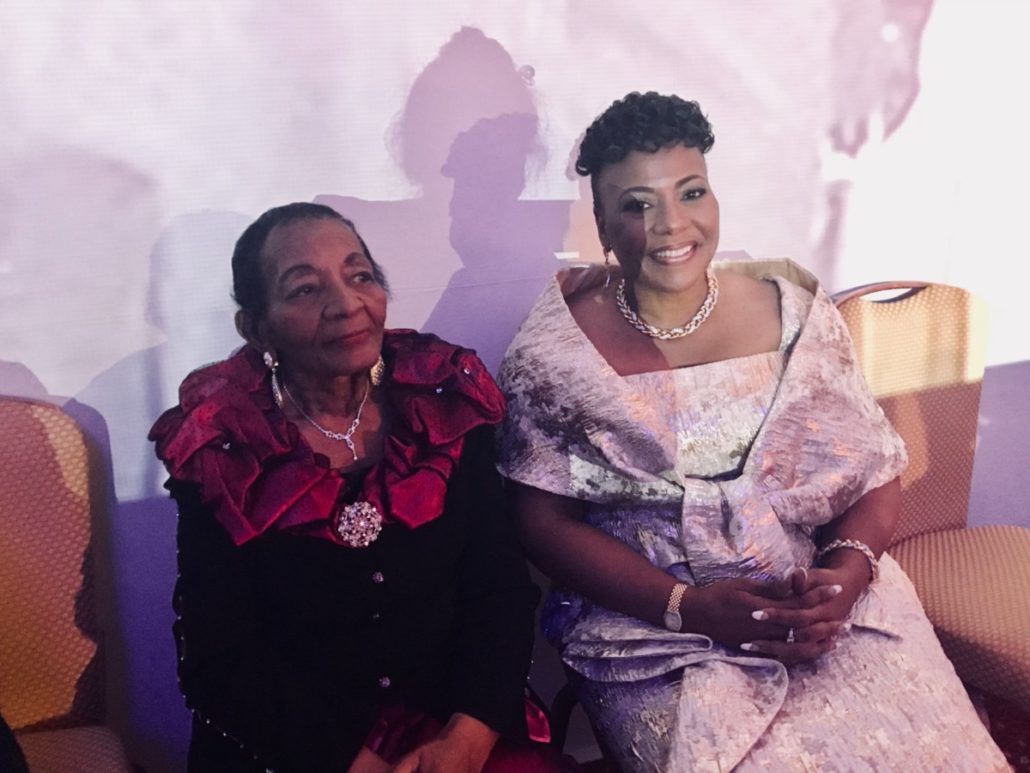 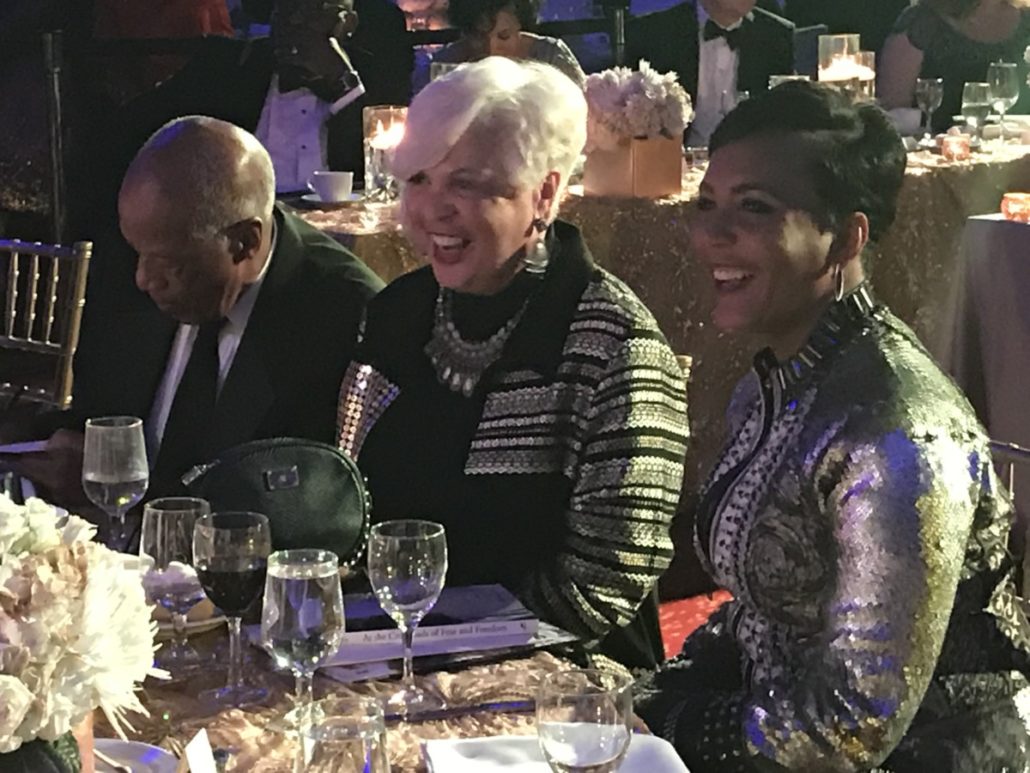 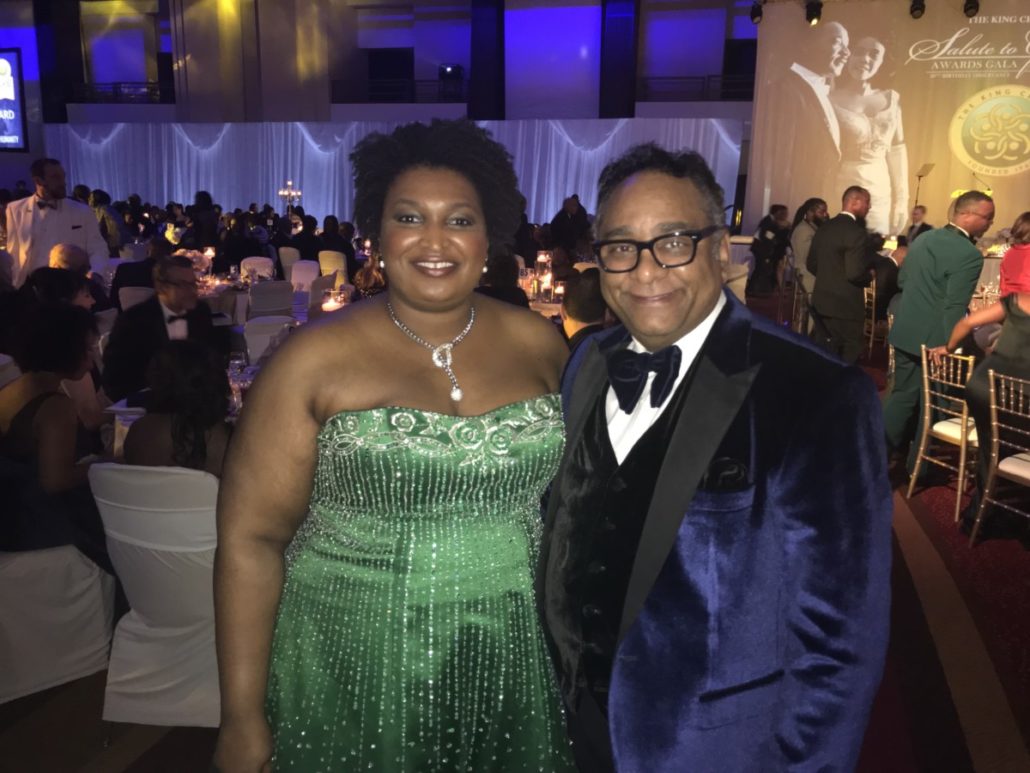 Stacey Abrams with Tyronne Stoudemire, an executive from the Hyatt hotel chain (Photo by Maria Saporta) 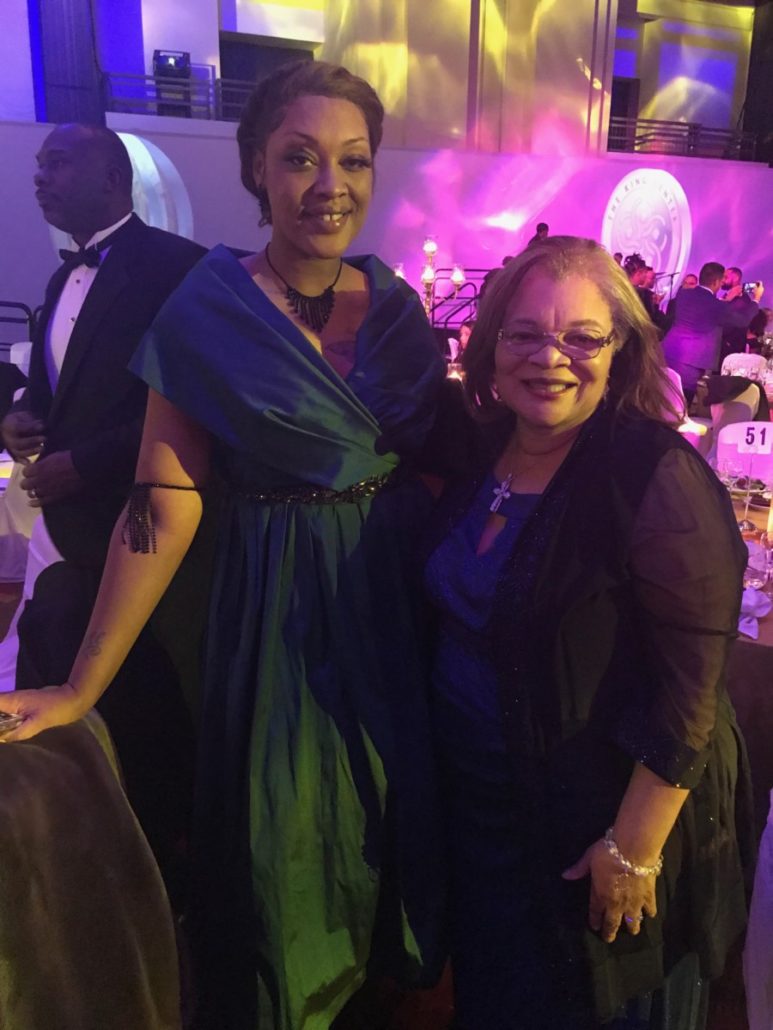 Alveda King (right) with her god-daughter. Alveda King, niece of the late Martin Luther King Jr., considers herself to be a friend of President Donald Trump (Photo by Maria Saporta) 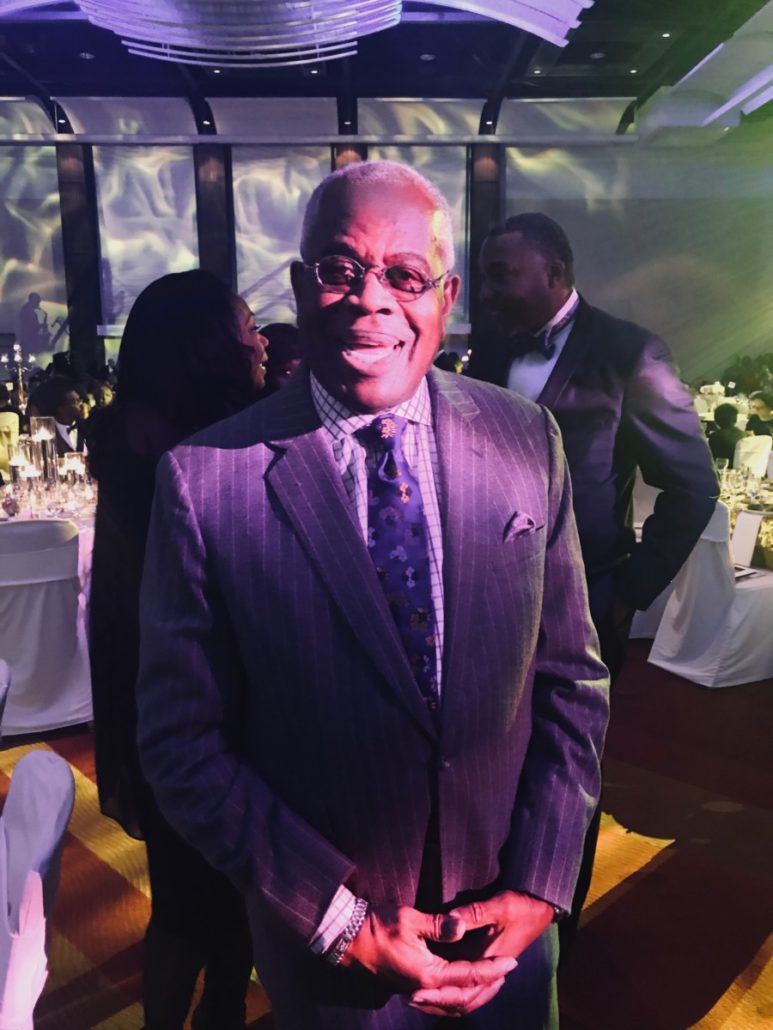 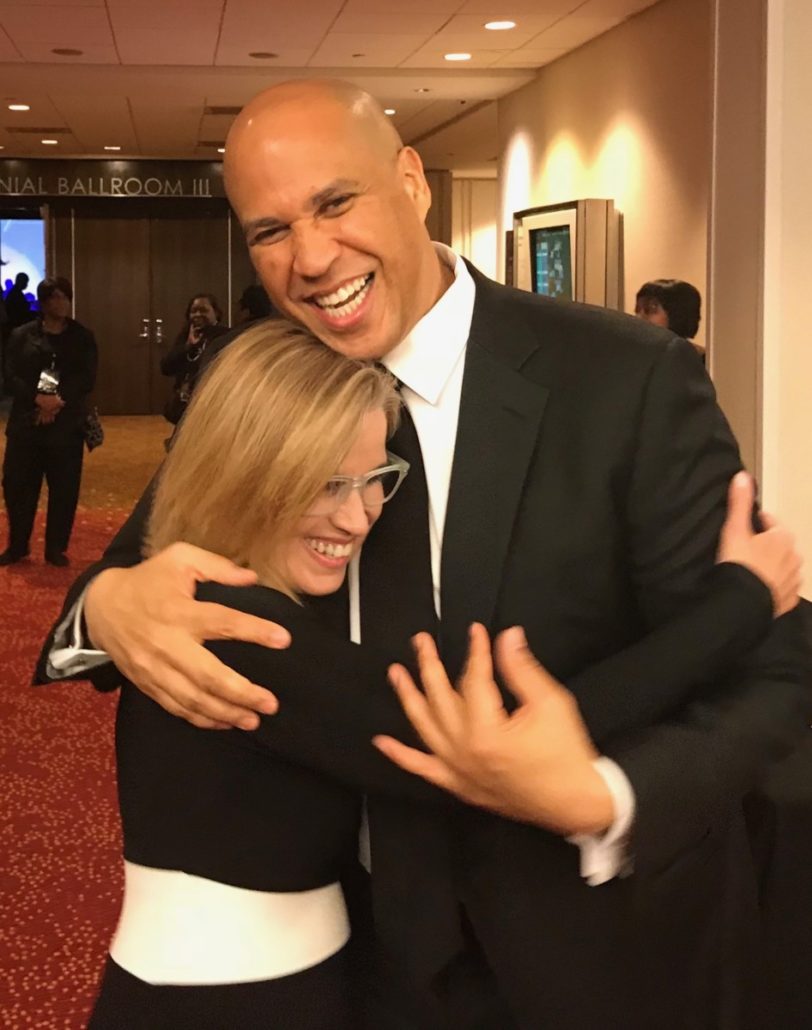