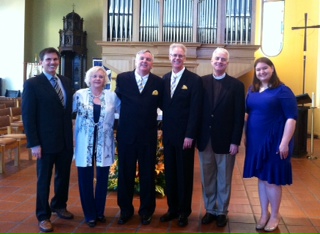 Dan Treadaway and Eric Still (center) of Atlanta married in California on Oct. 28, 2014, their 20th anniversary.

Wedding planning is never easy, and picking a date and location is particularly tricky right now for same-sex couples in Georgia, one of 14 states where gay marriage remains illegal. With the U.S. Supreme Court set to rule on marriage equality by the end of June, there’s the possibility that gays and lesbians could marry in the Peach State in 2015. For a couple who right now wants to nail down a date and place, the closest possibility is Florida or one of the Carolinas. Alabama may be the next state to legalize.

On this cusp of historic change are stakeholders like Kirsten Ott Palladino, who with her wife Maria Palladino publishes Equally Wed magazine from Atlanta, and local couples like Dan Treadaway and Eric Still, who married in 2014 for romantic and legal reasons, not wanting to stay unwed any longer. How does this window of uncertainty and anticipation in Georgia affect people like them here, one of the last holdout states?

They met at a wedding 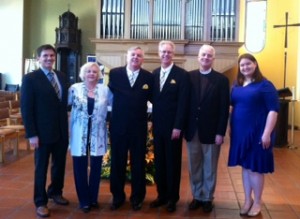 Dan Treadaway and Eric Still (center) of Atlanta married in California on Oct. 28, 2014, their 20th anniversary.

On Oct. 28, 1994, Treadaway and Still met at a church in Pennsylvania where they were groomsmen for a mutual friend who like them lived in Atlanta. Both say it was love at first sight, and their relationship helped Still come out to his family. Seven months later, they moved in together.

They celebrate their anniversary every Oct. 28, and on that date in 2000, held a commitment ceremony that the Episcopal church categorized as the reaffirmation of their baptismal covenant. It was as close as they thought they would ever get to having their relationship officially recognized.

When they attend weddings of opposite-sex couples, “it feels conflicted,” Treadaway said. “I’m so happy for people I love, and celebrating that they found each other, but it’s also, ‘Gee, I wish we were up there.’”

In early 2014, the start of their 20th year, they began planning their own wedding in California, at that time one of 15 states that issued married licenses to same-sex couples. “We had no clue that these actions would happen so fast,” Treadaway said. “By the time so many states [legalized same-sex marriage], we had everything planned and paid for…. There was a little regret. Maybe we would have held on a little longer to do it in Georgia.”

Six people attended the California ceremony; another 150 or so celebrated at a reception in Atlanta a few days later. As much as the couple would have liked to have married in Georgia, at age 55 (Still) and 52 (Treadaway), they didn’t want to wait for the state to change or keep fighting.

“Dan and I saying vows to one another in a church and being legally married—I knew it would be a great experience, but I had no idea how deep it would be,” Still said, and his husband nodded. “I suddenly realized how important it is to have that opportunity …and that most of the country is recognizing our relationship.”

The priest scratched out the word “bride” when he entered their wedding in the church’s record book.

“I think in the future, people are going to have a similar feeling to what we have now about the lunch counter sit-ins and demonstrations of the 60s,” Treadaway said. Acknowledging that society once banned same-sex marriage “is going to feel like, ‘Wow, that happened? They did that?’”

Still was more practical: “The main thing is that marriage gives you simple, instant benefits.”As a longtime employee of a small family-owned company, he would receive much better medical coverage for much less money as a spouse covered by Treadaway, who works for Georgia Tech. The state of Georgia extends spousal medical coverage only to heterosexual employees.

Until the law changes, they will not inherit one another’s Social Security benefits, and they are not next of kin. They will travel with dual powers of attorney documents, in case one of them needs hospital care. “Just to let us be in the same room,” Still said.

“It’s embarrassing how backward Georgia is,” he said. “We will be able to go to Alabama and get married before it’s legal here. It’s time to get over it.”

A significant aspect to a wedding is money, and Georgia misses out on same-sex wedding spending. Still and Treadaway spent at least $4500 on their modest California event, and about $600 on their Atlanta reception. In Alabama, an estimated $22 million will be generated and possibly more than 300 jobs created in the state the first three years after marriage equality. 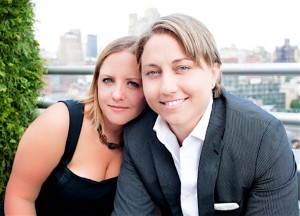 The wedding industry—and its ignorance of same-sex couples and bias against them—inspired Palladino to launch Equally Wed in March 2010, when same-sex marriage was legal in five states. (Sandwiched around her startup was her wedding to magazine cofounder and creative director Maria Palladino on June 13, 2009, which they made legal in New York on Aug. 19, 2011). For this couple, promoting same-sex weddings from a holdout state was more than targeted marketing; it was both personal mission and a political statement.

“When Maria and I were getting married in Georgia, a lot of people were surprised,” Palladino said. “Even a childhood friend of mine said innocently, ‘I thought that was illegal,’ which it’s not. Not being legally recognized and being illegal are two entirely different things.

“In all aspects of my life, I don’t take no for an answer very well. I consider myself a lifelong champion of the underdogs. We have to keep fighting for what is right. You can’t rely on someone else to do it.”

By showing weddings of real couples, not just celebrities, who are LGBTQ (lesbian, gay, bisexual, transgender and queer), Equally Wed aims “to prove that love really is love, no matter what gender you are or aren’t [and] spotlight the normalcy of our love and commitment,” Palladino said.

When Georgia’s ban on gay marriage is struck down, Equally Wed staff will pop the champagne and party. “My friends tell me I’m the most optimistic person they know, but when we launched Equally Wed, I had no clue that we’d be here in 2015 with only 15 states to go,” said Palladino, its editorial director. “I thought in our lifetime, yes. But not this fast; I’m ecstatic.”

Documenting these stories is important so people always understand the obstacles, waiting and decisions that straight couples didn’t encounter as our country reinvented the definition of marriage. Soon, pinning down the date and place may be the greatest hassle for any bride or groom in Georgia, no matter who they love.

Previous Article
What makes the return of measles so dangerous and disheartening?
Next Article
Park Pride grants $800,000 to improve 15 parks in Atlanta and DeKalb