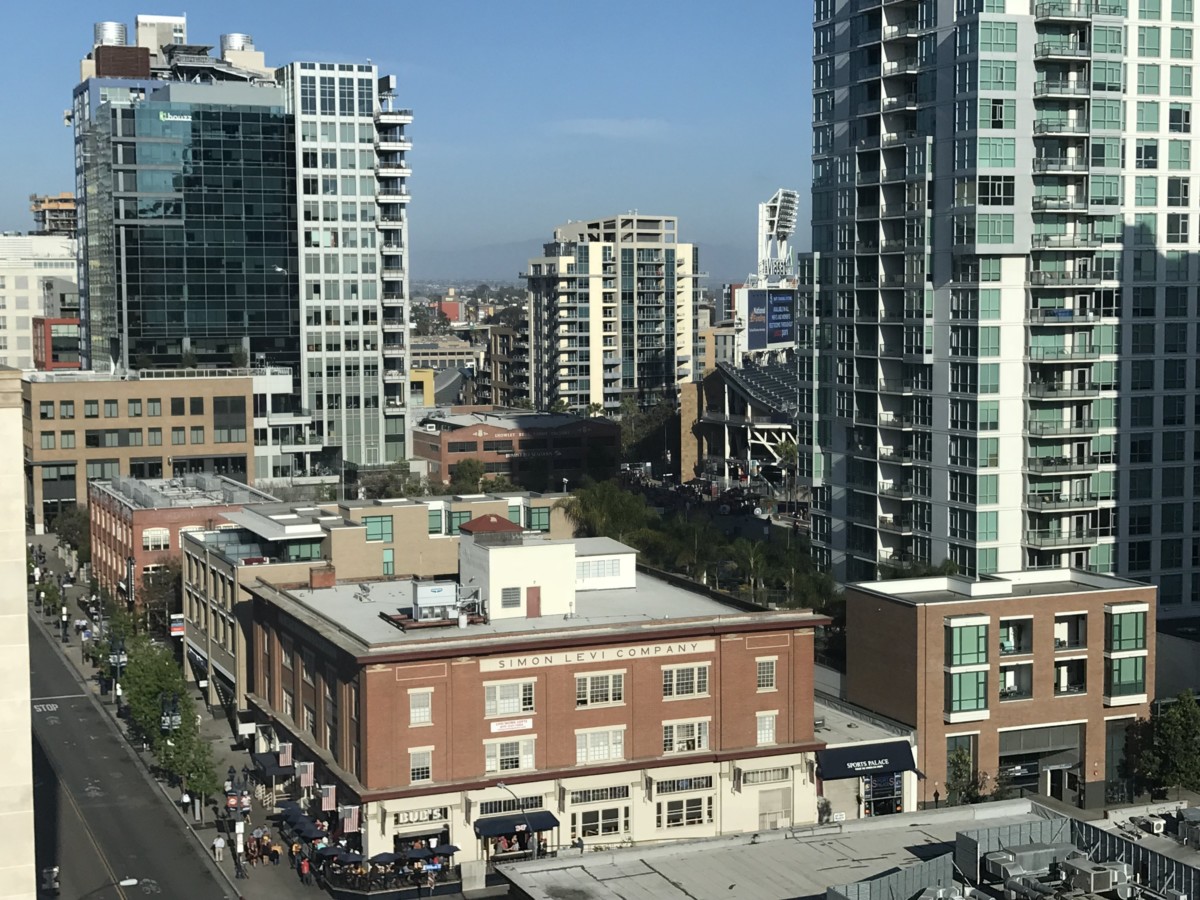 SAN DIEGO, CA – It’s hard for residents of San Diego and Tijuana to see where the U.S. border begins and Mexican border ends.

In fact, San Diego and Tijuana consider themselves to be “CaliBaja” or “Calexico” or “Mexicali” – all names that represent a mashing together of the southern edge of California with the northern edge of Mexico. 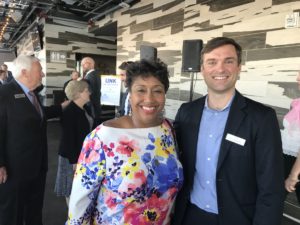 Then 25 years ago, an effort was made to create a San Diego dialogue to bridge the lines of communication.

“We had constant communication among civic leaders on both sides of the border,” Larroque told the 120 metro Atlanta leaders who are part of the 2018 LINK delegation on their first day in San Diego.

“Our region didn’t have a border in the past,” said Avila, who said the region is returning to those historic roots. “We have a shared history, a shared culture.”

Then she added: “We speak with one voice. We have one vision.”

So a company may have its corporate headquarters in San Diego but have its manufacturing facility in Tijuana.” They enjoy each other’s sports teams and cultural institutions. There are three main land ports of entry within the San Diego Metropolitan Statistical Area, and the busiest one – San Ysidro – has the crossing of 60,000 cars and 32,000 pedestrians each day. The number of cars is expected to increase by 87 percent by 2030.

Kurt Honold, a former mayor of Tijuana who is now president of the Tijuana Business Council, said it all boils down to respect. “We respect each other,” Honold said. “It is less expensive to build things in Tijuana than san Diego. We are not taking jobs from the United States. We are working together to make the region better.”

When the San Diego/Tijuana leaders were asked how they navigate the tensions to “Build a Wall” or to get out of the North American Free Trade Agreement (NAFTA), they show little signs of distress. 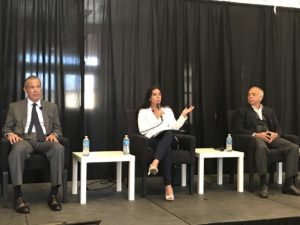 “It creates obstacles and opportunities,” Avila said. “It’s brought our region and our regional leaders even closer together. Everyone is talking about it… We are educating people.”

The two regions also balance out each other. Housing affordability has become a major problem in San Diego.

“Many people live in Tijuana because it’s more affordable,” Avila said, adding that they commute to San Diego to go to work.

“We have that shared challenge where we are both very far from our capitals,” Avila said, adding the question CaliBaja faces: “How do you close the distance between our capitals and our region?”

One man who has been working on that question for decades is Jerry Sanders, a former mayor of San Diego who is now president and CEO of the San Diego Chamber of Commerce. He has been living in the region since 1970.

“We work closer with Tijuana than we do with any other city in California,” Sanders said in a brief interview during a reception Wednesday evening at Coasterra Terrace on Harbor Island Drive. “We work more closely with the governor of Baja than we do with the governor of California. Our economies are so intertwined that you can’t separate them. Every new job in Baja creates half a job in San Diego.”

Even though there is such a close relationship between the communities on both sides of the border, Sanders said: “We are not really invited into the conversation is because we are very pro Mexico.”

Sanders added that illegal immigration today is only a fraction of the problem that existed in the 1980s.

“It’s not an issue anymore because the economy in Mexico is so much better,” Sanders said. The Mexican economy is now providing more jobs for its people, so fewer are crossing the border to look for a better life in the United States.

Sanders said that a delegation of 170 leaders from San Diego and Tijuana go to Washington, D.C. each year to show how bilateral cooperation is working between their communities.

“We talk about the model that’s here,” Sanders said. “It works out excellently.” 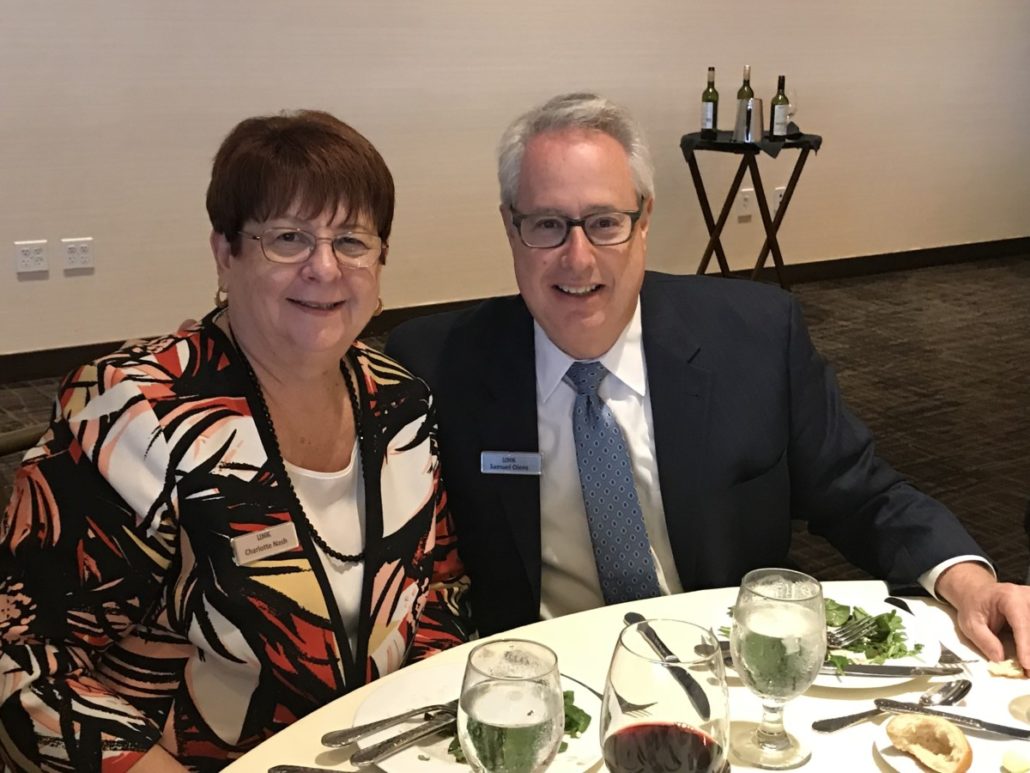 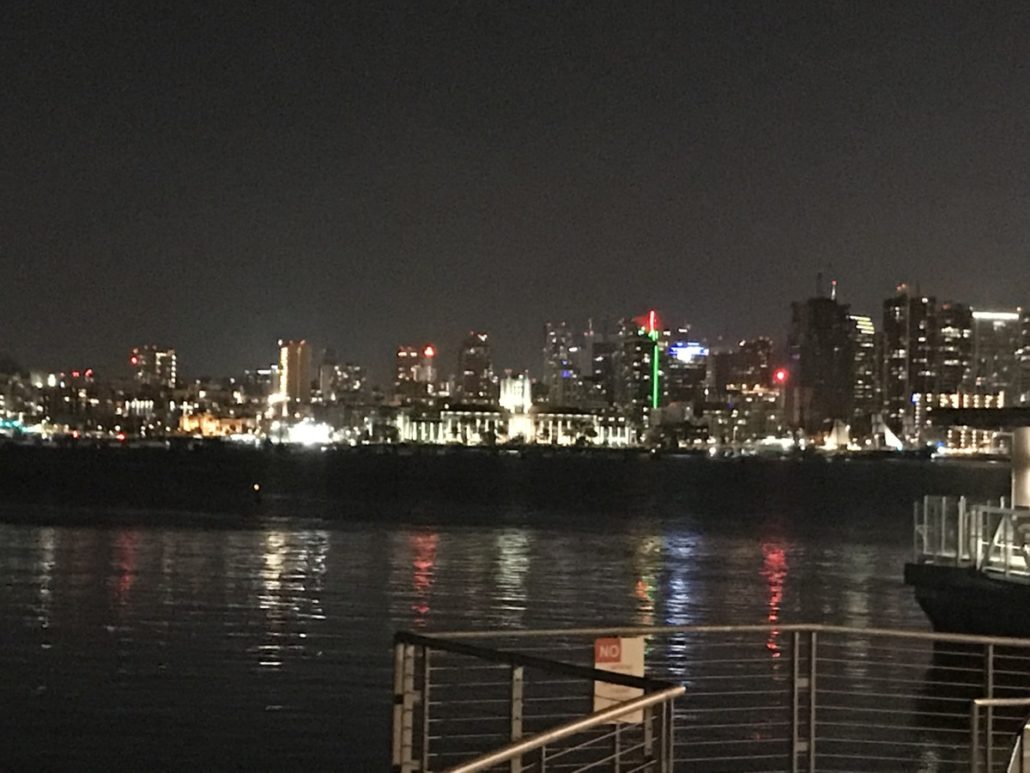 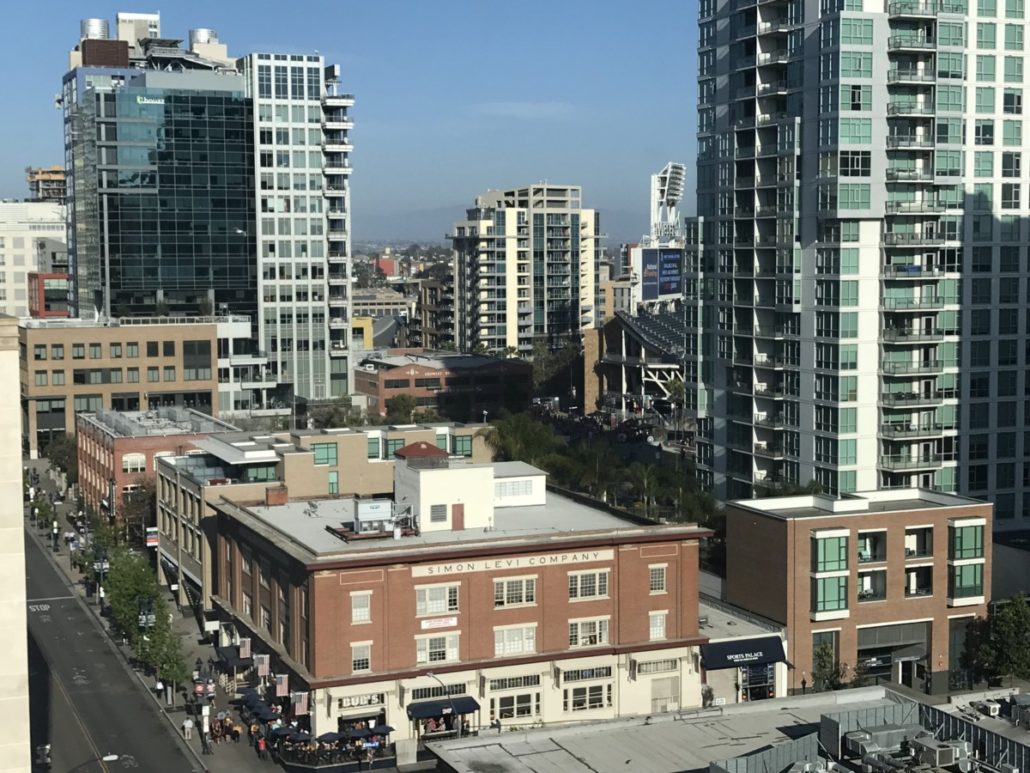 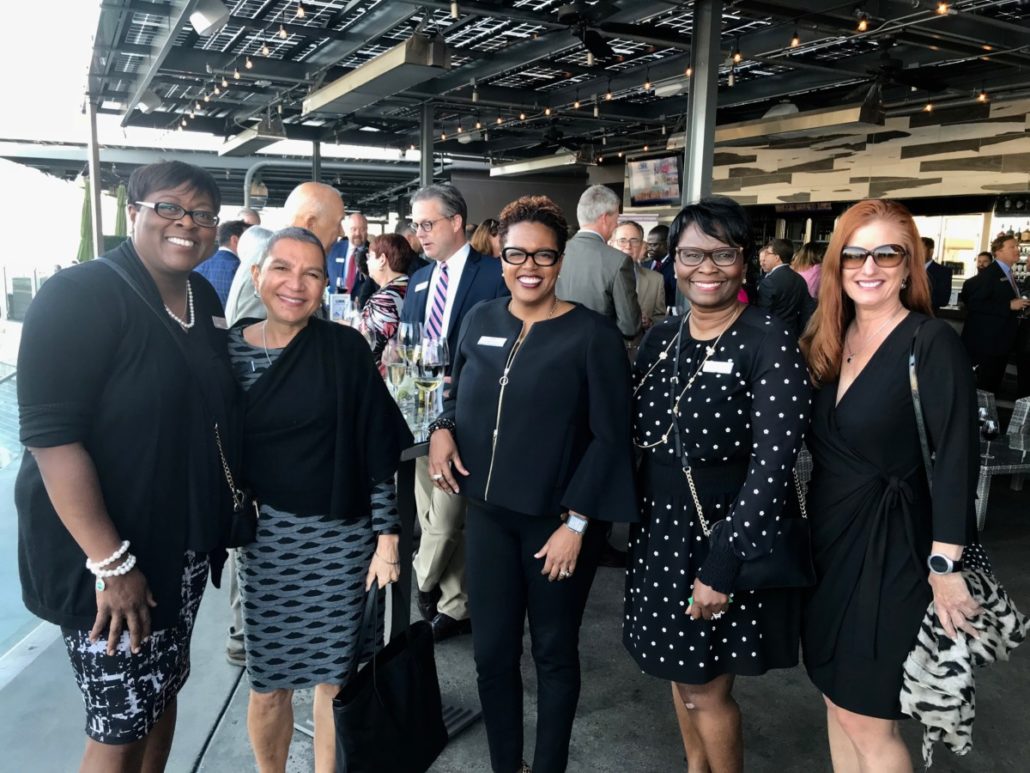 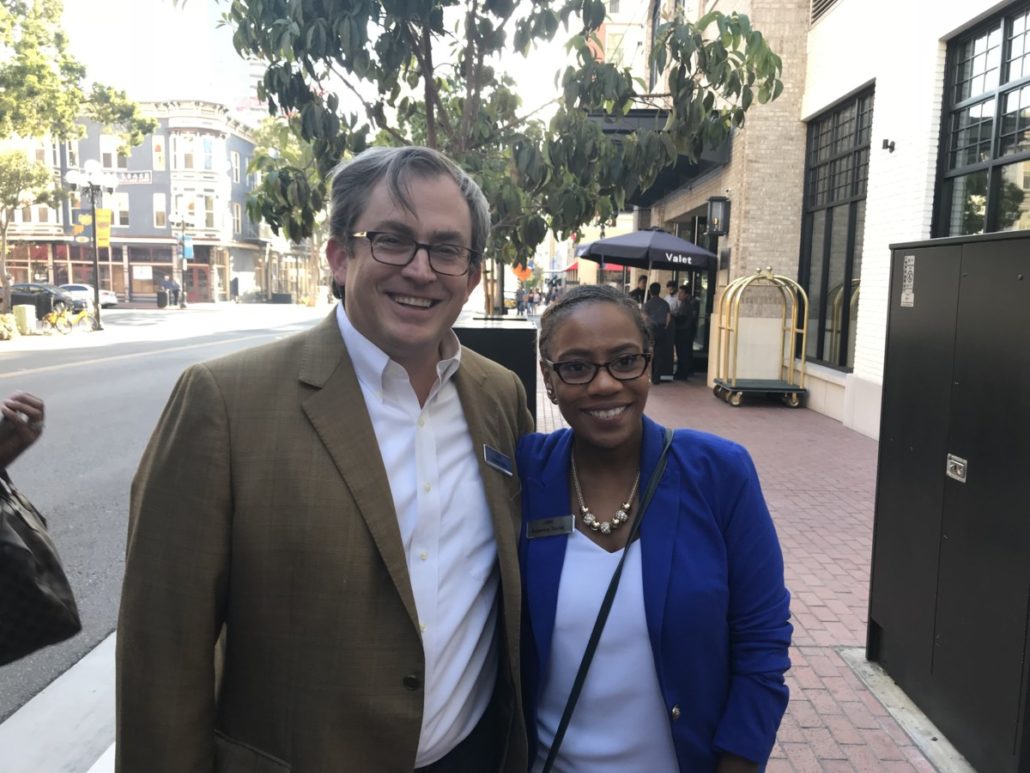 MARTA Chair Robbie Ashe with Katerina Taylor, president and CEO of the DeKalb Chamber of Commerce (Photo by Maria Saporta) 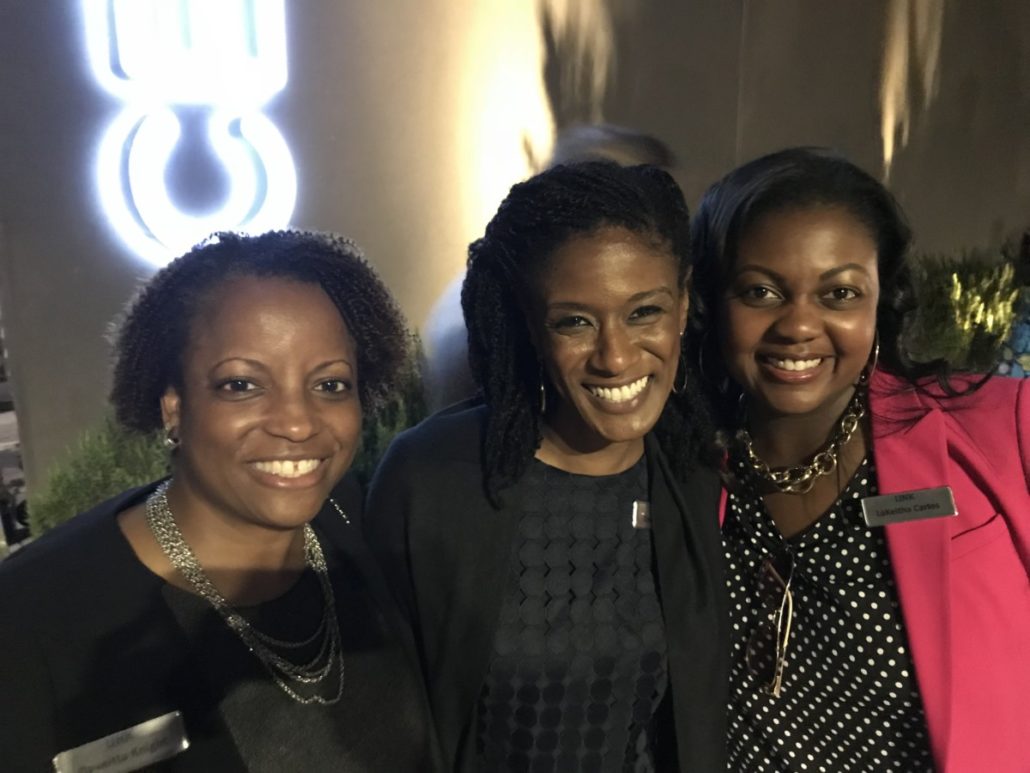 A trio of powerful younger women on the LINK trip: Daveitta Knight of Jacobs consulting firm with Deisha Barnett of the Metro Atlanta Chamber and Lakeitha Carlos, DeKalb County’s chief of staff (Photo by Maria Saporta)