The Sara J. González Memorial Park is a small, triangular greenspace nestled in Atlanta’s Westside that’s become a center for community and inclusivity. Unveiled in 2018, the park was named in memory of González, a changemaker in the local Hispanic community. 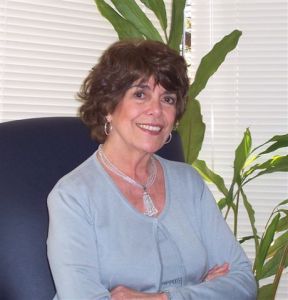 Born in Cuba, González later had to flee to the U.S. with two children, a suitcase and limited English. In Atlanta, she built a full and impactful life. The park commemorates her legacy as president and CEO of the Georgia Hispanic Chamber of Commerce and champion of Hispanic businesses in Atlanta.

The park features a playscape for all abilities, an outdoor learning space, a community garden and a new youth soccer field that debuted on Sept. 23. The park’s leaders, local elected officials and environmental advocates gathered to celebrate the opening of the new field, funded by local nonprofit Park Pride.

In 2009, her daughter Isabel González Whitaker spearheaded a cause to rename the park, formerly known as Coronet Way Park, to honor her late mother. 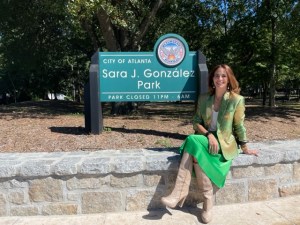 “[A park] was a no brainer because parks, by nature, shouldn’t discriminate. They are inclusive ecosystems welcome to all,” Whitaker said. (Photo courtesy of Isabel González Whitaker.)

“[At her memorial,] people were coming up to me, saying in Spanish, ‘Your mother was a saint; She saved my life; She helped me start this business,’” Whitaker said. “This whole new definition of success materialized in front of me. Before I thought it was defined by achievement and material acquisition and, at that moment, I [realized] success is sticking your neck out for others and working on behalf of those who are most vulnerable.”

She continued: “That definition of legacy solidified in my brain that whatever I was going to create in her honor needed to live out that value of uplifting others.”

The former Coronet Way Park felt like the right fit because it was within walking distance from where her mother lived for 30 years, but featured minimal offerings — maybe a swing set — and was in “a state of disrepair and neglect.”

After a lot of dedication, hard work and help from Park Pride, the park was renamed and reopened in 2018. 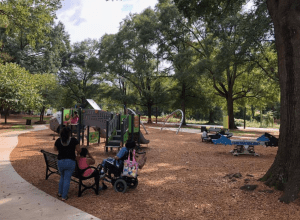 Whitaker also established four key pillars for the park that reflected themes of inclusivity: make the park ADA-compliant, ensure the playground is designed for all abilities, build a children’s soccer field and create a legacy plaza to reflect themes of inclusiveness and cultural diversity.

This is a space of firsts, as the community park is regarded as the first in the city and state named after a Hispanic leader.

“Getting it renamed was so powerful for me and [being the first] brought this whole other level of significance because I knew there was value in representation,” Whitaker said. “I wanted this park to reflect the best of what we could create because it now reflected more than just my mother’s legacy, it reflected the community.”

Over the last few years, the park has become a hub for unity, family and community. In addition to being the first local park named after a Hispanic leader, it’s also the City of Atlanta’s first park with a Learning Nook — including electricity for laptops and seating for 10 to 15 students — and a Latin ethnobotanical community garden. Welcoming Atlanta also holds food and goods distribution events twice a month at the park.

In the next five years, Whitaker hopes to add a permanent public art installation to the park, representing the community’s culture, values and beauty. 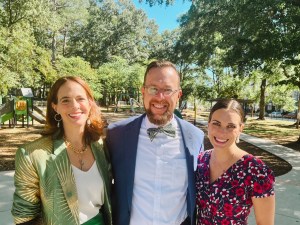 Park Pride Executive Director Michael Halicki said that local community leaders and park organizations could learn from this grassroots movement and reinvigoration of the greenspace.

“When I describe the park, people would think that it’s huge. It’s not a particularly large park but it’s a well-activated and programmed park,” Halicki said. “The Project for Public Spaces’ Power of 10+ says that well-loved and active parks don’t just have one activity, they have a layering of different activities and different audiences. I think that this small but mighty park is a great example of layering those different activities to make the park all the more vibrant.”

He continued: “[Park Pride’s] mission is to engage communities to activate the power of parks, and I think this is a good example where the vision for this park not only honors the past but also meets the needs of the present.”

Click through the gallery below for more snapshots of the recent ribbon-cutting event for the park’s new soccer field. Photos by Kelly Jordan. 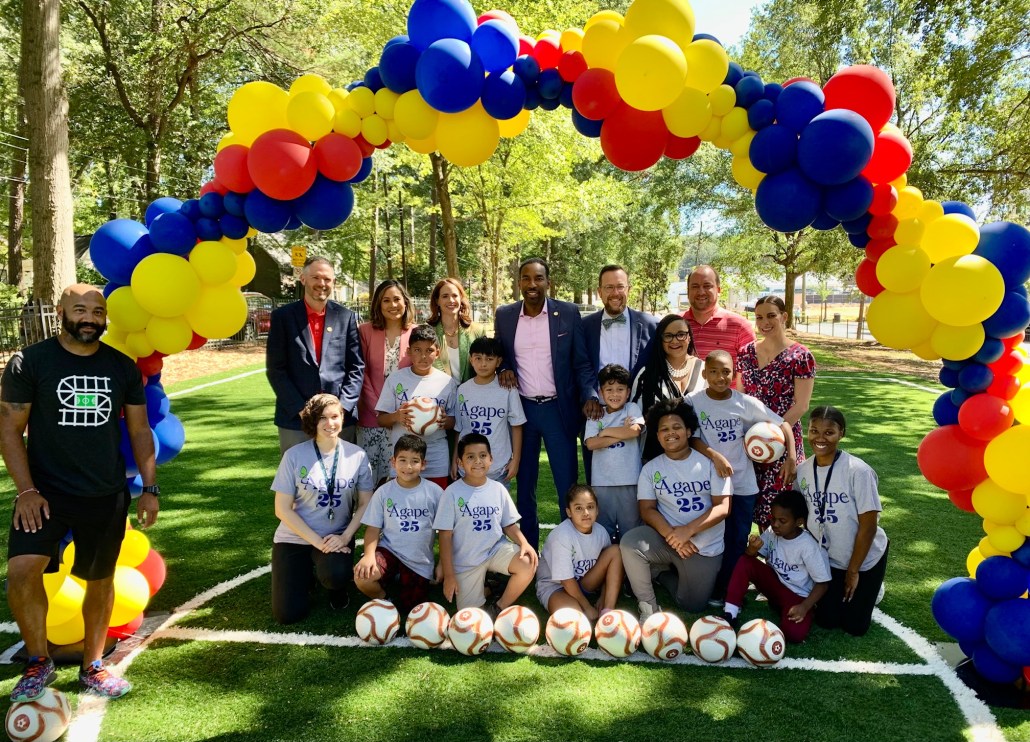 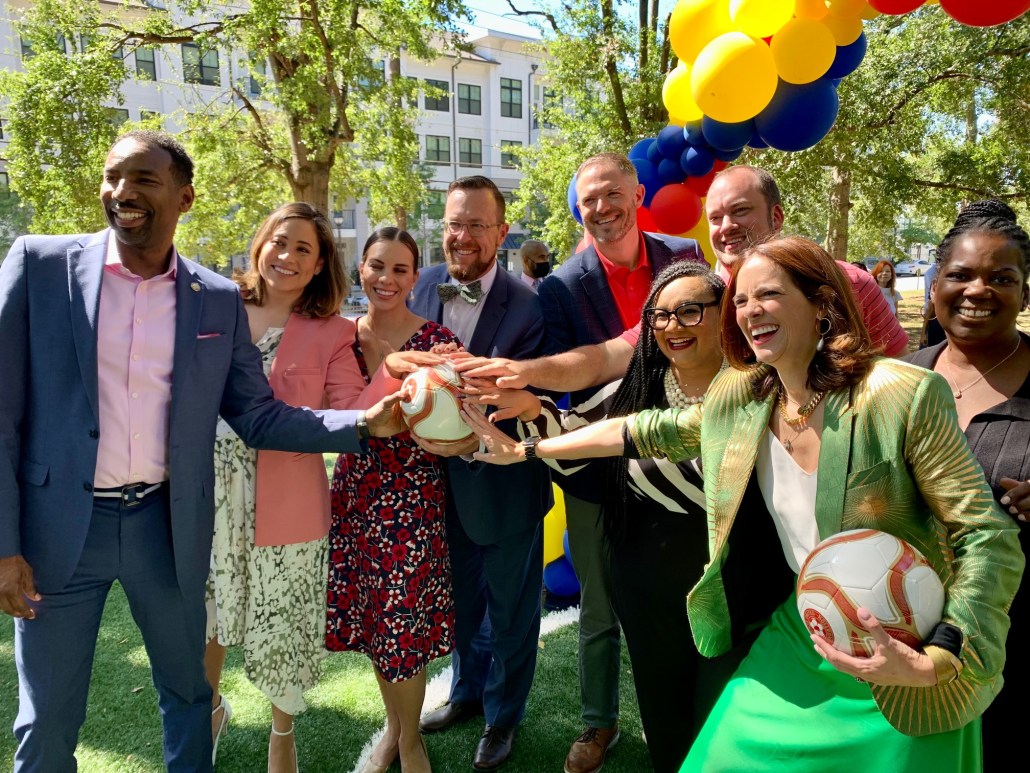 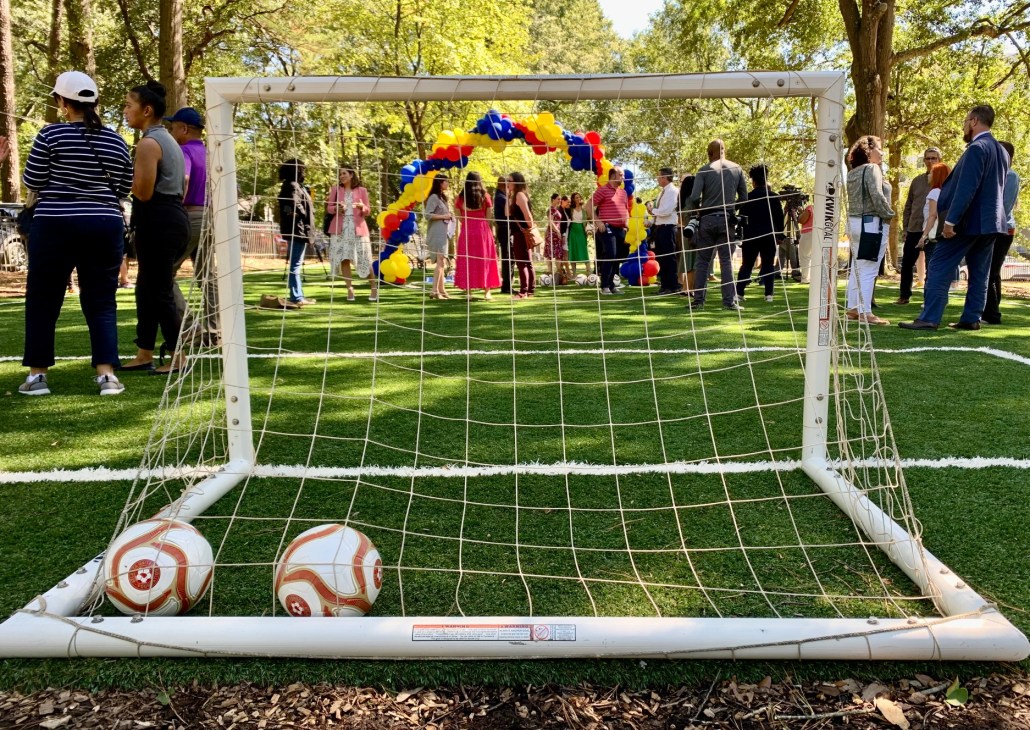 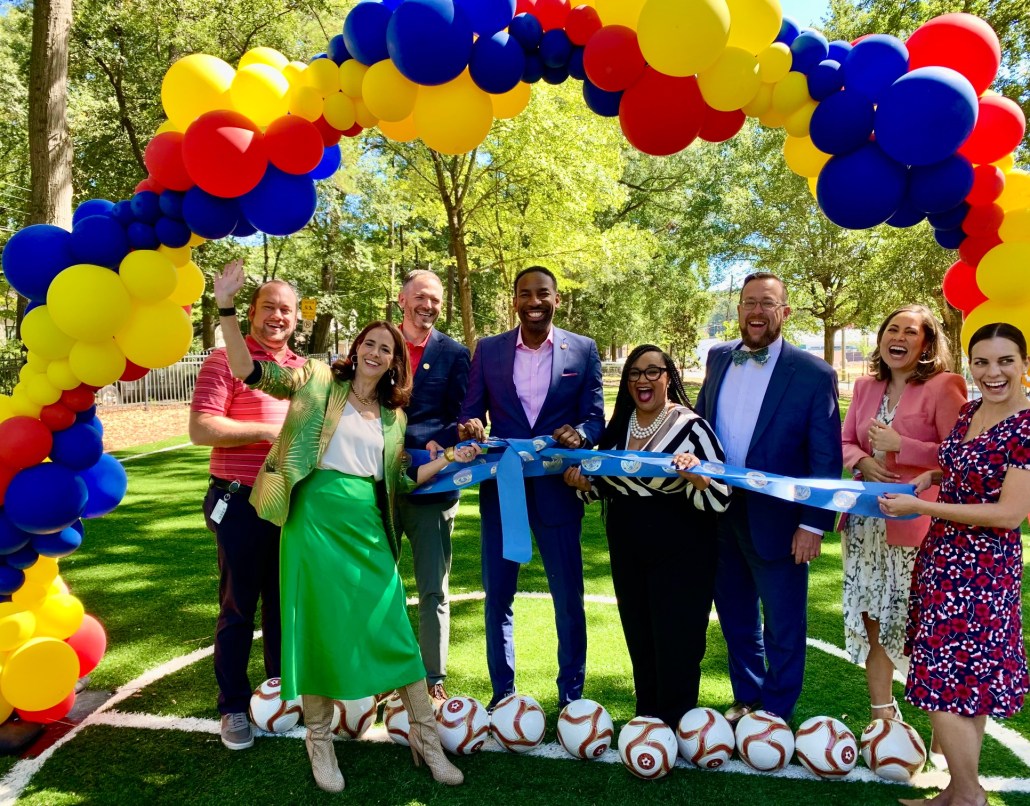 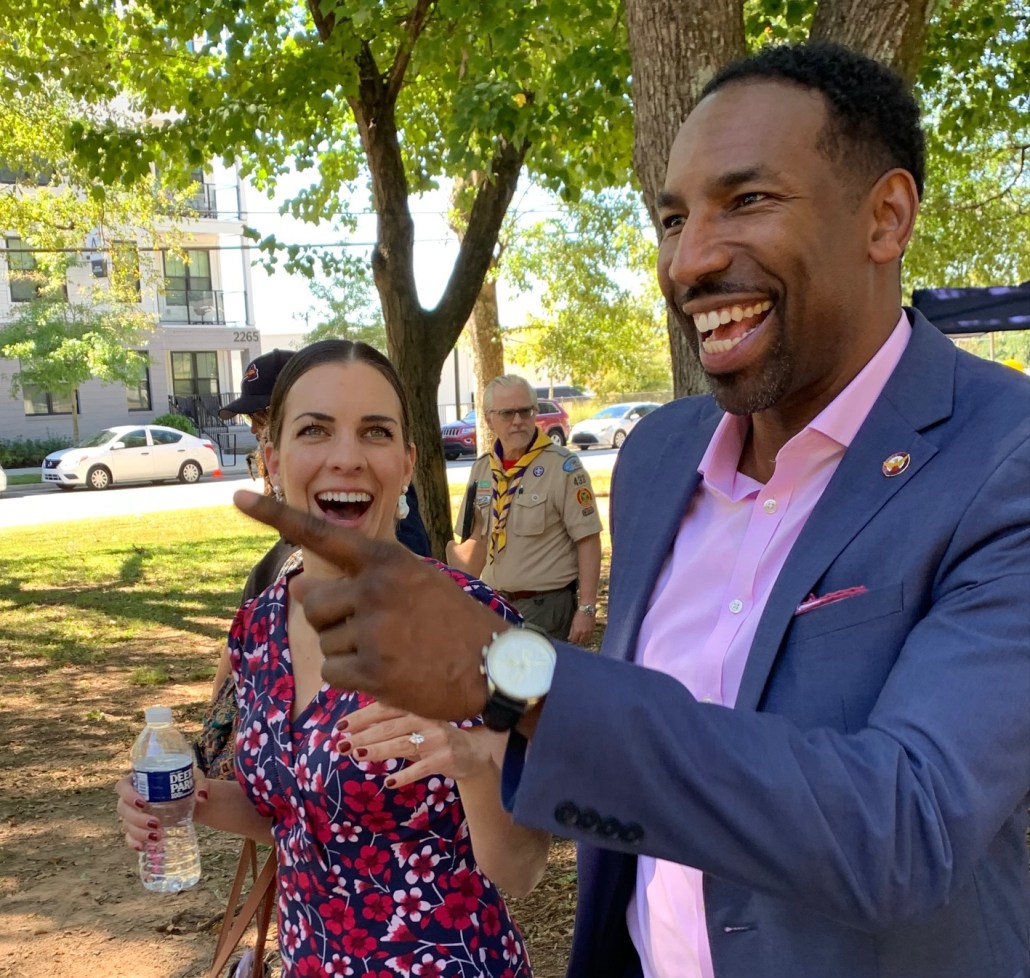 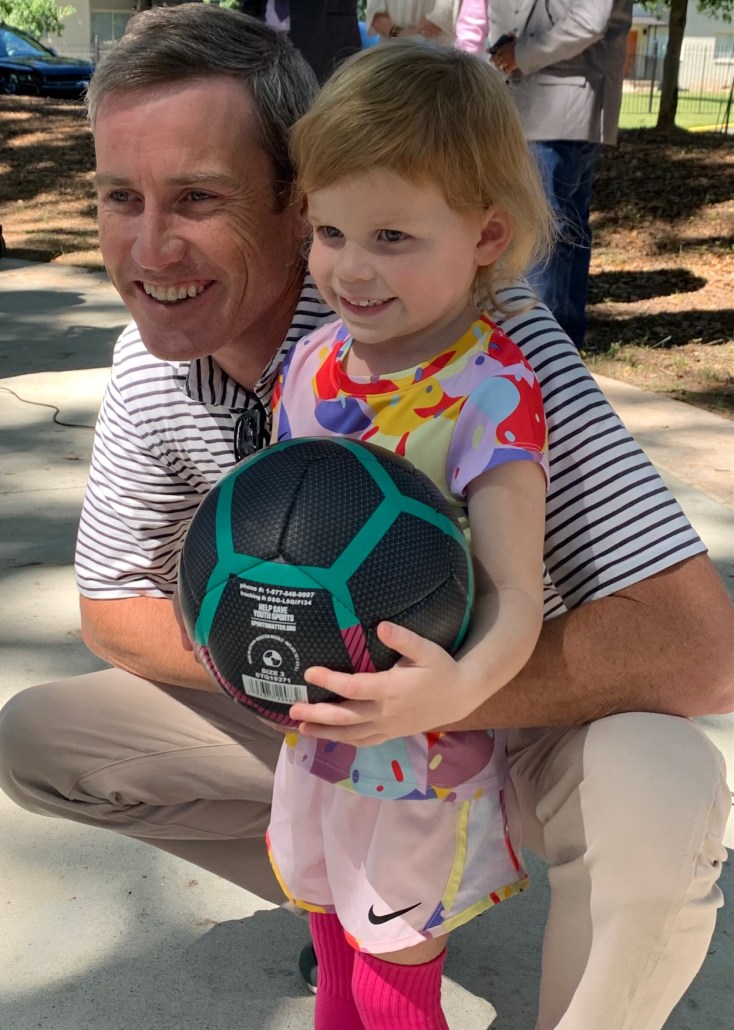