In the heart of the historic English Avenue neighborhood in Atlanta’s Westside, there stands a monumental stone shell of a building — St Mark AME church.

The eye-catching structure is a testament to the area’s history — once a thriving community that suffered from “White Flight” that became a significant heart of a middle-class Black neighborhood. And then suffered a second abandonment as as the congregation grew and needed a parking lot to accommodate its members. The structure fell into disrepair.

Today, the four stone walls made of granite from Stone Mountain symbolize the resiliency of the Beloved Community — a group of leaders who are working to restore St. Mark into its traditional role — as a sustainable cultural center for the neighborhood. 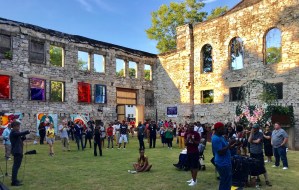 Atlanta City Planning Commissioner Tim Keane speaks at a community gathering during the 2018 National Night Out within the four walls of St. Mark. (Photo by Kelly Jordan.)

The group is applying to have the structure designated as a landmark by the City of Atlanta to permanently protect the historic space and help protect it from being demolished.

On a late December day, a group of community leaders gathered in front of the remains of St. Mark to talk about their plans to restore the structure and unveil the numerous partners that have joined the effort. Standing in the center is Pastor Winston Taylor, an Atlanta native and an architect who bought the shell of a building in the mid-1990s.

“Look at the granite, the steps and the walls. They were meant to stand here forever,” Taylor said. “I bought St. Mark in 1997 with the intent of making it serve the community again.”

Those intentions are now beginning to bear fruit. A year ago, the Atlanta Preservation Center joined the effort to save and restore the structure. Other groups have joined in — Savannah-based historic preservation consultant Landmark Preservation LLC, Kroneburg Urbanists + Architects, faculty and students from Georgia Tech’s School of Architecture and numerous other nonprofits and for-profit partners — to help nurture the grassroots efforts to renovate the structure and rebuild the community.

The group is applying for a $50,000 grant from the National Trust for Historic Preservation as part of its African American heritage initiative to develop the drawings to stabilize the structure with the intent of preserving it for years to come.

“The granite gives you a literal monument, but the space takes on so much more than just a landmark — it’s the center of the English Avenue community,” said David Mitchell, executive director of the Atlanta Preservation Center. “This space represents a real understanding of what Atlanta is and its origins. It tells a unique story of our city.”

The church was built in 1920 for the Western Heights Baptist Church, and it served a white, working-class congregation. As the area’s demographics changed, the church’s moved away. In 1948, the church sold the building to St. Mark AME, which had been in the community in a church building that had been destroyed by fire. Then St. Mark AME abandoned the stone structure in 1976, and it remained vacant – suffering from neglect until it was purchased by Taylor.

Working with the community, the Westside Future Fund launched a master planning effort with the expertise of urban planner Dhiru Thadani. That led to the City of Atlanta passing the Westside Land Use Framework Plan to serve as a guide for the redevelopment of the area – to encourage attracting new investment and residents without displacing legacy residents.

The plan quickly zeroed in on the potential of a rejuvenated St. Mark, which sits at a key community corner at the intersection of James P. Brawley Dr. N.W. and Cameron Alexander Boulevard N.W. 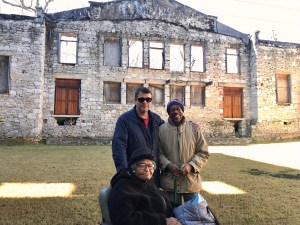 “This monument was built to be the center of the neighborhood,” said Mother Mamie Moore, a community resident and co-founder of the Beloved Community. “St. Mark has become the place where we can implement the Land Use Framework Plan. For me, this symbolized a point where we can continue to build out a place that can give people hope. Rebuilding under-resourced neighborhoods is not easy work. This to me is our opportunity to use all our resources to rebuild a healthy and sustainable English Avenue community.”

Listening to Pastor Winston and Mother Moore, it is clear they’ve become disciples of the Westside Land Use Plan, which can be described as a Bible for the community to follow — because it was drafted with the full participation of neighborhood residents.

“It’s a brilliant document,” said Mother Moore, highlighting the plan’s call to create a neighborhood business district at the intersection that includes St. Mark and the historic yellow store, which was subsequently purchased by the Westside Future Fund.

“The plan is a beautiful document,” Taylor chimed in. “That’s why we’re following it.”

“If we follow the plan, this neighborhood will be healthy and sustainable, and it will not have gentrification,” Mother Moore said. “Developing a healthy sustainable neighborhood occurs from the inside out.”

Case in point, the alliance between Taylor, Moore, Mitchell and numerous other community members has already begun to reactivate St. Mark as a gathering place even though it still has no roof. 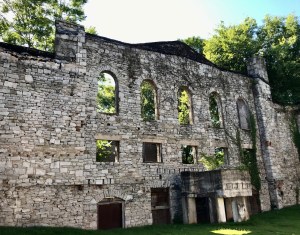 The beautiful stone work of the historic St. Mark is a unique Atlanta monument. (Photo by Kelly Jordan.)

Brock Built provided support to build the large wooden doors to the space. An electrical hook-up has been updated to support events. Taylor has had conversations with Tommy Holder of Holder Construction about the possibility of building a retractable roof to the building so it could continue to have a grass floor and be a botanical center.

“Everyone loves green space. A retractable roof would allow us to have events all year round,” Taylor said. “I want St. Mark to be at the nucleus, at the heart of everything that takes place in English Avenue.”

That would be a return to how the space was used historically when the church hosted graduations and festivals for the community.

“The church space was where everybody could get together for whatever reason, like the Boys & Girls Clubs,” Mitchell said. “For the marginalized, all these major events were held within these walls. It became the heartbeat of this community. Sadly, both the white community and the Black community abandoned this space.”

“We are talking about the trust,” Taylor said, adding that Black and white leaders “lied” to community residents over the years. “There has been a whole lot of misdealing on everybody’s part. All of us are responsible for what is happening here.”

So, in addition to rebuilding St. Mark, Mitchell acknowledges that trust must also be rebuilt. 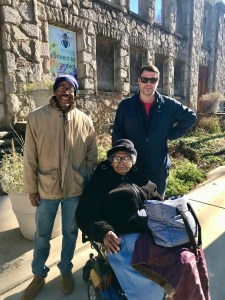 “What the Atlanta Preservation Center can do in this process is work with the community and create trust through the historic spaces in this community,” Mitchell said.

Stabilizing St. Mark is the first step in the long journey to rebuilding the community.

For Mother Moore, it has been frustrating that it’s taken so long to get efforts to take hold. Of course, there has been a pandemic, racial unrest and economic ups and downs that have taken their toll.

But the grant from the National Trust, the hope the building will be designated a landmark by the City of Atlanta, the involvement of many organizations working to support the renovation of St. Mark all bode well for progress to occur in 2022.

Previous Article
A historic name?
Next Article
Listen to students first; improvements in education will follow