One of Atlanta’s greatest architects — Henri Jova — has passed away.

Jova, 94, died on Jan. 13 in West Palm Beach, Fla. after a short illness, according to his partner of 42 years — David Rinehart. A celebration of his life is planned at the Atlanta Botanical Garden on Thursday, April 3 beginning at 5 pm.

Although Jova’s contributions to Atlanta’s architectural fabric was significant, his overall impact on the city went far deeper than his striking designs.

He was the pioneering presence who led the renaissance of both the Midtown neighborhood as well as its once-decrepit business district.

Jova designed Colony Square — a mixed-use development that was revolutionary when it was designed in the early 1970s.

It was the first modern project in Atlanta to combine office, retail, hotel and residential as part of one high-rise complex — a development that struggled initially leading some to believe that it had been built ahead of its time. 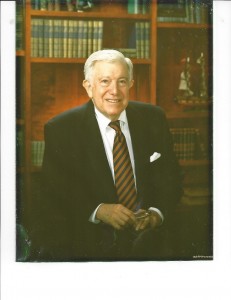 But Jova also lived his belief in Midtown. At a time when significant disinvestment was occurring throughout the central city, Jova bought and renovated several properties at the nexus of Seventh Street and Mentelle Drive in the heart of Midtown. It became Jova’s compound — a modern, yet sensitive, interpretation of the residential style that Midtown was to embrace in decades to come.

Largely because of Jova’s stand and investment in Midtown, my parents bought a house two blocks away on Eighth Street in 1970. At the time, virtually every house on the street was for sale as homeowners became part of the white flight panic with the advent of school integration.

My father, also an architect with a modernistic bent, bought our family’s first home for a song, but then spent more than twice what he paid for it to renovate it with his own European flair.

Others followed Jova’s lead, and literally, Midtown is the community it is today because of the leadership that Jova showed when he helped save the neighborhood.

Rinehart shared an obituary that he had prepared on Jova — calling him “the last of a generation of young architectural imports to Atlanta in the early 1950s.”

Jova had a unique ability to fuse modernism with classical design, and he held great respect for the past, which led him to work on several preservation projects, including the restoration of the original Underground Atlanta.

Jova was born at his grandparents’ home Danskammer–on-Hudson, an 1830’s Greek Revival home near Newburgh New York, to a prominent Spanish/French family on May 11, 1919.

Jova’s father, Joseph Luis Jova, was a ceramic engineer and director in the family’s brick factory whose “JJJ” insignia can be found throughout the early 20th- century buildings of Manhattan and New England.

His mother Maria Gonzalez Fernandez Cavada was the daughter of a Spanish diplomat and her great-great uncle, Federico Fernandez Cavada, was the leader of the insurgents during Cuba’s Ten Year War (1868-78) against Spain. He was captured, tried and executed by a Spanish Tribunal. His portrait hangs in the Capitol at Havana today noting a great patriot in Cuba’s long struggle to gain autonomy.

A graduate of Cornell University (1949), Jova’s education was disrupted by World War II when he served in the U.S. Army Combat Engineers in the South Pacific, seeing some of the bloodiest battles of the war in New Guinea and the Philippines.

Jova was the winner of the prestigious Prix de Rome at the American Academy for 1949/1950. A Fulbright Fellowship added an additional year of architectural study in Rome in 1951.

On his return to New York City he worked for architectural firm Harrison & Abramovitz before moving to Atlanta in 1954 to join his first cousin’s firm, Abreu & Robeson Architects as chief of design.

In 1966, he joined Stanley Daniels and John Busby to form Jova/Daniels/Busby.

One of his more delightful designs— a futuristic series of round structures — was the Trust Company Bank building (later Pie Bar) on Monroe Drive.

Jova retired from the Jova/Daniels/Busby firm as chairman of the board in 2002.

Throughout his adult life he was active in the theater in New York and in Atlanta. He was involved with the original Wits End Players and was a life trustee of the Theater of the Stars that for many years brought Broadway productions to Atlanta. Jova also continued to have a parallel interest in painting . His work is in numerous corporate and private collections.

He was a life trustee of the Atlanta Botanical Garden, served on the boards of the Visiting Nurse Association of Metropolitan Atlanta, the Fulton County Council of the Arts, Atlanta College of Art.

He was a Knight of Corpus Christi de Toledo (Spain) and a member of the Century Association, (New York City), and the Piedmont Driving Club (Atlanta) and a past member of the Society of the Four Arts (Palm Beach).

Just this past August, Jova married his life partner — David Rinehart — in Newburgh where he grew up.  Rinehart developed and wrote the book: “Henri Jova – A Classical Intermezzo: An Architect’s Life” that was published by the Atlanta History Center in 2009.

He was preceded in death by his brother, the Hon. John Joseph Jova of Washington, D.C. and his sister Ines Jova Cline of Newburgh, NY.