Few family-owned companies make it to the third generation.

But S. Truett Cathy can rest peacefully in his grave knowing that the famous chicken sandwich chain that he started is alive and well in the loving hands of children and grandchildren.

The love and devotion among the Cathys and their extended family members is undeniable. It was in full display on Wednesday, Sept. 10 during Truett Cathy’s Memorial Service at the First Baptist Church of Jonesboro.

The bond that exists extends much farther than just among those who enjoy the same bloodlines. The Cathys – carrying forth a practice set by Truett himself – have embraced people from all walks of life facing any number of challenges – and made them part of their family. 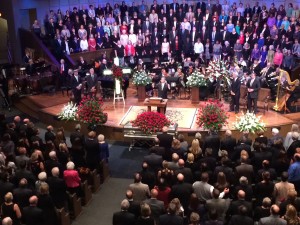 Although my political and religious beliefs are in stark contrasts to the Cathys, I have come to admire, respect and love them for who they are. It has been a privilege to see first-hand how they have lived up to their Judeo-Christian values of helping others in need. There is no hypocrisy or duplicity in their beliefs and their actions.

Over the years, I was able to get to spend many occasions with Truett Cathy, but two stand out.

The first was when he was one of the authors at the Atlanta Press Club’s Holiday Authors’ Party. My son, David, who was probably in middle school at the time, came with me.

Truett Cathy hugs one of the WinShape kids (Special: Chick-fil-A)

Cathy genuinely connected with him like few adults ever connect with a kid. I’m not sure what they talked about, but I do know Cathy was trying to share his life lessons with my son. He gave David one of his books, and he told him to write a book report, and he would give him a personal tour of his antique cars.

David always felt bad that he never completed that assignment. When I told him that Truett Cathy had passed away, David said he wanted to go to the service – something I’ve rarely heard him say. Unfortunately he couldn’t go because he had other commitments.

Whenever I think of that encounter, I think of Cathy’s book: “It’s Better to Build Boys than to Mend Men.”

Cathy, who taught Sunday School to middle schoolers for 50 years, took in foster kids and gave much of his philanthropy to help disadvantaged youth at Camp WinShape. Through Chick-fil-A, he sent hundreds of employees to college to get a degree. 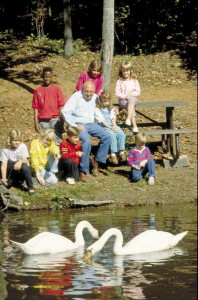 Truett Cathy at one of the WinShape foster homes (Special: Chick-fil-A)

In fact, at the service, Bubba Cathy asked Henry White, a man in his 70s who was the first employee Truett Cathy sent to college, to stand up.

The second occasion was in January, 2006 when I was able to fly down to St. Petersburg with him and his wife, Jeannette, on the company plane. The occasion was  his grandson, Andrew, opening his own Chick-fil-A restaurant – the first member of the third generation to be entering the business.

Although it was a wonderfully celebratory moment, I was able to witness the interesting dynamics between the different generations and family members.

Truett Cathy, then 84 and still CEO of the company he had founded, was realizing that decision-making had already shifting to the younger generations.

Four years earlier, Truett Cathy’s three children – Dan, Bubba and Trudy – had hired Ron Braund, a family-business consultant. He knew that less than 30 percent of family businesses successfully made it to the second generation, and less than 15 percent made it to a third generation.

Braund interviewed the three siblings, their spouses, their children and their spouses to find out what they expected and wanted from Chick-fil-A and what its core values should be. 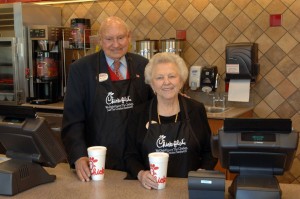 Together they developed “a covenant” for the business – to continue being closed on Sundays and being deeply loyal to employees.

But they also said all family members should spend two years working somewhere else other than Chick-fil-A before joining the family business.

And that made Truett Cathy angry. Braund happened to be on the corporate plane with us, making it a bit awkward.

“I wouldn’t be paying him. We have different opinions about things,” Cathy said while pointing to Braund, who was sitting diagonally across from him. To him, family members spending two years working away from Chick-fil-A was “just marking time.”

By the time we had landed in St. Petersburg, any hard feelings had seemed to disappear. The bond between grandfather, son and grandson was undeniable and unbreakable – even when talking about their own challenges. 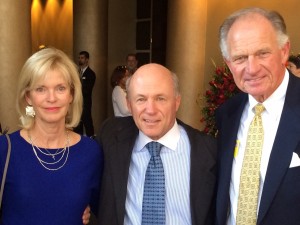 Dan Cathy sent this photo taken of him at his father’s memorial service standing between Nancy Gordy Sims of the Varsity and Joe Rogers of Waffle House (Special: Chick-fil-A)

“There was probably more conflict between Dad and myself in my teens and 20s than there was between Andrew and myself,” Dan Cathy said at the time. “I think I was much more challenging and confrontational. I didn’t want to be hostage to Dad’s thoughts. I wanted to own them.”

Truett Cathy then chimed in: “He likes to please Daddy on his terms, not on my terms.”

“He grew old in years but stayed young at heart,” Dan Cathy said. “For me, he was my Sunday School teacher…. He was my boss for 44 years… We had much fun. I will proudly live in the shadow of his legacy for the rest of my life.” 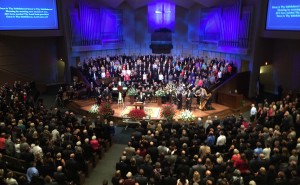 And then Dan Cathy told those gathered at the memorial service that the last words his father told him three weeks ago were: “Take good care of yourself.”

As much as I had cared for Truett Cathy, my connections to Dan Cathy were even deeper.

In 2002, my phone rang when I was at my desk at the Atlanta Journal-Constitution. It was Dan Cathy. He was at Grady Hospital, and he wanted me to come see him.

We met in the hospital cafeteria – his hands and arms bandaged up like white boxing gloves where he had been severely burned while setting a pile of stumps and branches on his property.

Cathy had called me because he wanted to tell me what a “marvelous” experience he had had at Grady Hospital.

“It was a rich, rich, meaningful experience that I hope to treasure and save for the rest of my life,” Cathy said. “This is an outstanding hospital.”

There were not enough adjectives to describe his 10-day stay, but he tried – conscientiousness, competency, efficiency, graciousness, cleanliness….

“These are heroes, right here on the front lines, serving our community,” Cathy said. Atlanta should be proud to have Grady Hospital at its doorstep.”

That story told me so much about Cathy. He went out of his way to speak well of one of the most maligned institutions in our community, and he did it out of the goodness of his heart.

It’s funny. Somehow this week, I received a link to a column written by Shane Windmeyer in HuffPost Gay Voices titled: “Dan and Me: My Coming Out as a Friend of Dan Cathy and Chick-fil-A.”

The piece is a confessional from a gay man who acknowledges that although they likely will never agree with each other when it comes to gay marriage, they have developed a friendship based on the respect they have for each other.

Well Steve, I’m right there with you. There is something special about the Cathys.