Former Atlantans Brian and Sassy Henry with daughters Camille and May May on Pawleys Island, site of their Sea View Inn.

Pawleys Island SC — Brian and Sassy Henry say they left Atlanta ten years ago because they didn’t like how competitive everyday life had become. Simply getting a parking space was a hassle. They didn’t want to raise their daughters (ages 1 and 3) at such a fast, crowded pace.

“We literally left like thieves in the night,” said Sassy Henry, who grew up near Chastain Park and went to Lovett School. “We left our house furnished, and my sisters watched our animals. We had nothing but what was in our car, and when we got to the island, we slept on mattresses for three weeks.”

To restore their balance, they took on a big restoration project 350 miles east: an icon of South Carolina’s Low Country, the rustic Sea View Inn.

Now in its 75th year, and the only inn on Pawleys Island, the Sea View is where generations of families have vacationed, eating family-style meals in the dining room, unplugging how the rat race and pace conditions us over time. There’s no air conditioning at the Sea View, either, where the breezes and fans take over.

But when the Henrys got there, the inn was out of balance, too. The previous owners had stuffed it full of souvenirs from other places, and served global cuisine. On an island that rewarded familiarity, the Sea View had become an exotic postcard from everywhere else – foreign to Sassy’s childhood memories of Pawleys.

Today, restoration has a new taste and face.

The taste is Palmetto Cheese, the Henrys’ line of gourmet pimento cheese that inn guests adore, now sold throughout Atlanta grocery delis and in 3,500 stores in 28 states.

The face at first stared doubtfully back at them, but ended up sharing with the Henrys the knowledge of past generations.

Not “The Help,” but family 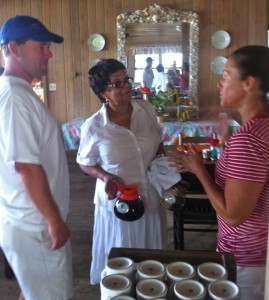 Brian and Sassy Henry wrap up lunch in the Sea View Inn dining room, chatting with longtime staff member Frances Duncan. The staff stabilized the Sea View Inn and helped the Henrys spin off a line of gourmet pimento cheese.

“What does this guy think he’s going to fix?” said a server at the inn for 30 years, Frances Duncan, as she looked at Brian Henry, a day after he showed up to manage the inn.

Her question was on point: he had never repaired a thing in his life.

“I was used to driving a nail, because I did build tree houses as a kid,” Brian said. “I looked at myself in the mirror and realized, ‘You’ve been on autopilot in Atlanta. You better strap it on now.’ There was so much work to do, and a staff who were unsure of us.  And, there were 30 aged voice mails from skeptical guests on the message machine. It was coming at us like a freight train.”

Brian Henry had a head for business (he had served as a consultant for Andersen, manager at Coca Cola and a director at ezgov.com), and the Low Country reminded him of his Louisiana roots.

And he had Sassy, an Atlanta native who in a quiet toughness lived up to her name.

Growing up in Buckhead, Sassy had vacationed on this windy four-mile spit of land between Charleston and Myrtle Beach, which billed itself as “arrogantly shabby.” She had experienced “since I was a baby in a basket” what Pawleys Island meant to generations of beach-going families.

“My uncle had a house on the south end of the island, and there was a lot of laughter and picking shrimp on the screened porch. I remember that smell and that feeling – always beachy…. It was the time everything was good and happy, even during hard times in my family’s life. There’s a lot of soul here.” 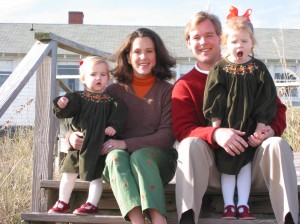 The Henrys (Camille, Sassy, Brian and May May Henry) not long after moving from Atlanta to Pawleys Island in 2002 to raise their family in a more peaceful setting.

Between those dreamy memories, her work as a corporate chef and her itch to leave Atlanta came the news that the Sea View Inn was for sale. Only it no longer matched the atmosphere of her island memories. The sand, salt, dust and sea winds had peeled the paint and clouded the window screens.

“There’s a difference between arrogantly shabby and rundown and dirty,” she pointed out as we spoke just after lunch recently in the inn’s wood-paneled dining room, where curtains she made fluttered in the breeze.

The Henrys faced resistance to change, and that resistance didn’t change. Guests have always signed up for meals on hand-lettered posters; when Brian recently introduced a dry-erase board, he heard criticism.

“Guests are skeptical when they hear there will be somebody new in charge,” reported the local Georgetown Times News when the Henrys took over. “Sea View has not had many rules and allowed the guests to feel like they owned the place. Many stay in the same room during the same week every summer for decades.”

The 20-room, framed inn came with a staff, too – local cooks such as sisters Myrtle Edwards and Vertrella Brown and servers who had been there for years, like Miss Frances. They weren’t sure about this Atlanta couple in their 30s, but the Henrys were certain they needed these allies. 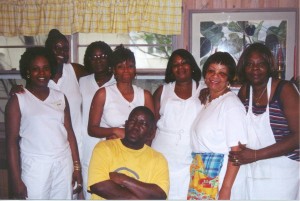 The long-time staff at the Sea View Inn became the foundation of its restoration.

“They are an integral part of what Sea View is,” Sassy Henry said. “They are not ‘the help,’ they are an extension of the family, and my family has a lot of tradition.”

Restoration came to the buildings, the menu and to the relationship between Sea View owners and employees. On an island with a unique ecological balance, between marsh on its western side and Atlantic Ocean to its east, the Sea View was finding a human balance.

The kitchen had adapted to the previous owner’s insistence on Mexican, Thai and curries. The cooks were taken aback when the Henrys asked them what they cook at home.

“They weren’t used to anyone asking their opinion,” Sassy Henry said. “It took a good year or two for them to understand I wanted to give them autonomy. 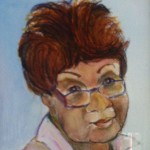 “In their kitchens, they’re using however many generations of knowledge, and we thought it was neat if they brought that to Sea View.”

Another change for the staff was a fair bonus system. Part of island tradition is for guests to tip, and now the staff split all of that, instead of just a percentage. Most recently, the dining room began displaying commissioned watercolor portraits of the staff.

“The inn is cozy, the beach light at dusk is magical and there is a roaring fire in the fireplace all day long,” said Marcy Herron of Atlanta, who makes Thanksgiving treks to the Sea View with her family.

“It’s great to hear the roar of the ocean while snuggled under the quilts piled high. The food is comforting and plentiful; the coffee and sweet tea seem to taste better at Sea View. There is a slow pace of life that makes your senses become alive, alert and happy. It’s a daily rhythm and experience that we look forward to all year long.”

The Sea View Inn became again the place where guests could expect a two-hour “quiet time” every afternoon. They knew cell phones and laptops stayed out of public view. They could count on fried chicken on Tuesdays and Crab Divine on Sundays.

In 2006, Sassy Henry was invited to sell a national line of cosmetics, which didn’t make a whole lot of sense because she hardly wears any. The offer ended up baring what was authentic, unique, and organic to her island life. 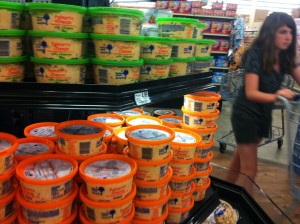 A shopper at the Food Lion grocery store on Pawleys Island passes the large display of Palmetto Cheese.

“I’m not passionate about cosmetics,” she said. “But I am about our pimento cheese.”

She had served and tweaked the recipe for tailgates at Atlanta Braves fans, then worked it into the hors d’oeuvres lineup before Sea View’s Wednesday night shrimp boil. A neighbor mistakenly referred to it as“Palmetto Cheese,” and the Henrys – with help from their staff – started supplying it to a nearby seafood outlet in Georgetown, SC. Next, they added jalapeno and bacon flavors to the line.

The label featured a vintage-y, black and white photo of Vertrella Brown, and the motto, “The pimiento cheese with soul.” USA Today wrote about how the Henrys use social media to increase sales at www.pimentocheese.com. 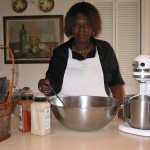 Sea View Inn cook Vertrella Brown is featured on the lid of every tub of Palmetto Cheese.

As the cheese started spreading across the Southeast, to 75,000 tubs sold each week, the Henrys put their profits back into the Sea View. “The cheese gets all our pictures re-framed and the furniture recovered,” Sassy Henry said.

Just like the Sea View and our staff is an extension of the Pawleys Island brand, because it’s rustic and genteel, pimento cheese is too, because it’s a comfort food with soul.”

The cheese, the inn, and the couple have followed a similar recipe for success: Blend the new and old to make the new better. 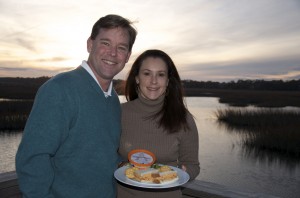 Brian and Sassy Henry’s entrepreneurial spirit led them to take their chances on operating and owning an old beach inn. The pimiento cheese they serve to guests is now a growing second business: Palmetto Cheese.

“Being able to go fishing or play golf in the middle of week or take a nap in afternoon – I can’t imagine not having this lifestyle,” Brian Henry said. “Sometimes at 2 pm, I’ll remember that if I had stayed in Atlanta, I’d been in a meeting right now. Talk about a metamorphosis. I have access to the things I love to do on a daily basis, rather than living a life that’s landlocked, physically and figuratively.”

“Would I love my kids to go to Westminster? Yes,” said Sassy Henry, who wouldn’t change the past.

The family returns to Atlanta about four times a year to see family, shop, eat at restaurants, catch a play or concert. To her, taking the chance on the inn still feels “like that scene in ‘Charlie and the Chocolate Factory,’ and we were [the winners].”

The Henrys feel as if they adapted to the staff’s “well-oiled machine,” more than the other way around. Their team keeps such a familiar pattern of work that they couldn’t break it even for a special outing.

“We wanted to take everyone to see the movie (‘The Help’) when it came out,” Sassy said. “But it never worked out, because we were all too busy.”