Searching for the poet James Dickey, finding beauty in the grotesque

Searching for a column topic while on vacation in the small beach community, I learned that the poet and novelist James Dickey (1923-1997) was buried here. Dickey, a one-time United States Poet Laureate and author of “Deliverance” was a native Atlantan, a graduate of North Fulton High School. Even better, a complete anthology of his poetry had been released a few months earlier. The new book made him topical. This should be easy. 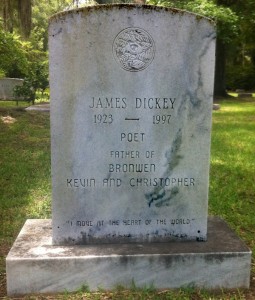 I had little luck finding anyone who knew him here. I called longtime residents. I tried realtors and checked property records to see if Dickey had ever owned a house in the area. I didn’t find one.

I tried contacting Dickey’s sons for help. I e-mailed his son Christopher, who is the Paris Bureau Chief for Newsweek, but my e-mails got bounced back. I tried calling Christopher’s brother, Kevin, who is a radiologist in New England, but couldn’t get through.

Several times I drove up and down the 3.5 mile route on Kings River Road from U.S. Hwy 17 to All Saints Church, where Dickey and his first wife are buried. The church had little information about him. I hung around the Spanish moss-draped cemetery and waited to see if fans of the writer would drop by to pay tribute to Dickey or tour groups would make a stop here on their regular rounds of the grounds.

I sat on a stone bench in front of Dickey’s gravestone, on which is inscribed the words: “I move at the heart of the world” from his poem “In the Tree House at Night.” On the stone, curiously enough, Dickey is identified only as “Poet” and “Father of Bronwen Kevin and Christopher.”

While I waited, I watched a video on my iPhone of a man reading the James Dickey poem, “In the Marble Quarry,” at the site of another poet’s grave.

Out of the basement of light,

On perhaps my tombstone

In which the original shape

Michelangelo believed was in every rock upon earth

Surprised to be an angel,

To be waked in North Georgia by the ponderous play

Of men with ten-ton blocks

One name on the headstone

Before this quest, I didn’t know all that much about Dickey. I’d heard him speak once and had read “Deliverance” in college and found it disturbing. I’d also read some of his poetry. But that was long ago, when I was much younger, more naïve.

I chucked the idea of doing the Dickey column at Pawley’s.

A month later, the gravestone’s message revived when I learned that Bronwen Dickey would be coming to the Decatur Book Festival for a poetry reading. She was on one of the final panels on Labor Day Sunday, with Ward Briggs, a professor, longtime friend of her father and editor of “The Complete Poems of James Dickey.” With them was Matthew Guinn, an author, and former personal assistant to the late poet. 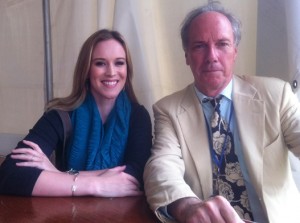 Bronwen Dickey and Ward Briggs at the Decatur Book Festival

Bronwen Dickey is a travel and conservation writer whose book on pit bull terriers is scheduled to be published next year.

They read four poems: “Cherrylog Road,” “The Leap,” The Heaven for Animals” and “The Eye Beaters,” and held a short question and answer session.

From the outset, Bronwen Dickey seemed as if she wanted to defend her father against a false image perpetuated by legends about him.

Bronwen Dickey described her father in ways that contrasted sharply with the popularized image of him as an outrageous alcohol-swamped fabulist depicted in unflattering biographies and exaggerated tales.

For example, Dickey said that when her father gave her a gift, it came with a treasure map leading to clues written in rhymed couplets telling her how to find it. She recalled, when she was a small child, how he let her sit on his lap as he corrected page proofs; and, how he taught her how to play chess while she was getting over scarlet fever, while managing to dictate letters at the same time.

Was he an exaggerator? Yes, said Bronwen Dickey and Ward Briggs.

“No,” said Briggs, smiling and shaking his head.

But he was never a dark, morose writer, who harbored an ultimately pessimistic view of the world, they said.

Briggs pulled up a YouTube video of an interview with James Dickey to prove his point.

“For anyone who reads my work, I would like to have it deepen him and make him more aware of possibilities of the mystery of things and the strangeness of the Creation, the Universe,” James Dickey said, during the interview. “As much as I write about death and disease, mutilation and so on … I consider myself essentially an affirmative poet. I know I remember hearing that Beethoven once said ‘he who truly knows my music can never know unhappiness again. I would like to think it (my work) had some effect of that sort.”

How is that possible for an author who wrote such lurid details about rape and murder, or about a  woman leaping to her death from a building?

Beauty in the grotesque 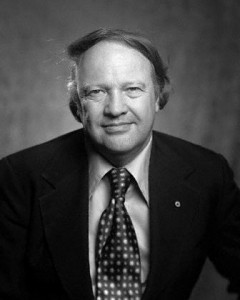 After the poetry reading, I read “The Eye Beaters.” It is based on a visitor’s account of seeing institutionalized blind children who constantly jab their eyes as if the pressure will cause them to see flashes of light.

Come something come blood sunlight come and they break

Through the child-wall, taking heart from the two left feet of your sound.

The children’s need for that vision, even at the cost of great pain, grabbed me, and I began to think that this effort to find to an easy assignment had turned into something more.

Reading Dickey reminded me of how over time, since reading “Deliverance,” I had moved from naivete to recognizing the possibility of transcendence, grace or even divinity in the grotesque in art and storytelling. Reading his poetry now, I saw this power. The search for meaning in a forlorn landscape is transformative.

After the poetry reading, I found the novelist Pat Conroy in the audience. He called himself one of the “original James Dickey fans.”

“There was such a big deal made about the Irish poet who died recently. I read (Seamus) Heaney. He doesn’t do anything for me,” Conroy said after the Decatur event. “Dickey changes people’s lives.”

Well Mr. Conroy, I’m curious to keep reading this poet, to keep probing the power of change that moves at the heart of the world.