Secession of another kind 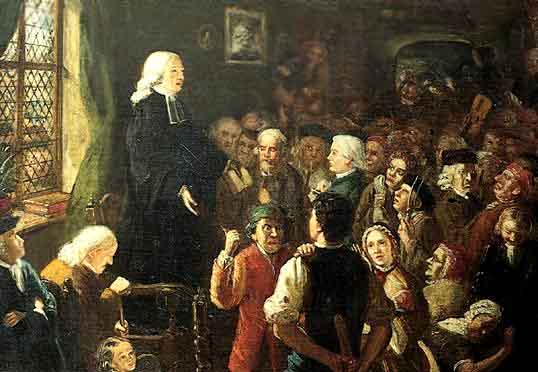 The steps leading up to the nation’s disunion in 1861 were many. If we are looking for one of the significant cracks between North and South that foreshadowed the irreconcilable chasm to come, we might look no further than the tiny community of Oxford, Georgia, about 35 miles southeast of Atlanta. 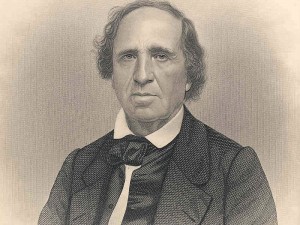 James Osgood Andrew presided as senior bishop over the Methodist Episcopal Church, South, from 1846 until his death.

Bishop James Osgood Andrew, one of the first residents of Oxford, was a Methodist minister who practiced in South Carolina and North Carolina, and in the Augusta and Savannah circuits. In 1832, as a delegate to the General Conference of the Methodist Episcopal Church, he was elected as a bishop. In 1836 he moved from the Augusta area to Covington, to be near the Georgia Conference Manual Labor School.

The school faltered, however, and in its place a new state-chartered Methodist college opened its doors to students in 1838. It took its name, Emory, from a beloved Maryland bishop who had recently died in a carriage mishap. The church purchased 1,400 acres around the college, laying out and selling lots as part of a new town they named Oxford, after the English university attended by John Wesley, the founder of Methodism. The Emory College Board of Trustees named Bishop Andrew its president in 1839.

Methodism has a connection with Georgia. It was in the colony of Georgia from 1736 to 1738 that John Wesley began his itinerant ministry, one devoted to “promoting ‘vital’ and ‘practical’ religion and to preserving and increasing the life of God in men’s souls,” according to New Georgia Encyclopedia author Frederick Mills. He returned soon after to England, but not before coming into contact with slavery, which made him a passionate opponent (“that execrable sum of all villainies”). While Methodism in England was unfolding inside the Anglican Church, the Methodist Episcopal Church in America formed as an organization in 1784. With its emphasis on revivalism and camp meetings, American Methodism grew rapidly. 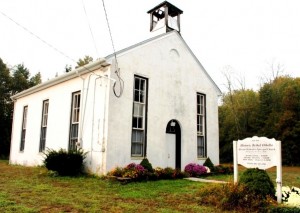 The Bethel African Methodist Episcopal Church is a rare, surviving African American church in the North. The AME church was associated with abolitionists active in the Underground Railroad.

Not surprisingly given the church’s origins, Methodism acquired a strong anti-slavery sentiment in many of its northern congregations. Many churches welcomed free blacks (and fugitive slaves) in their pews. Some, however, did not, with the result that African Americans began organizing their own churches, significantly the African Methodist Episcopal Church (founded in Philadelphia, 1816) and the African Methodist Episcopal Zion Church (founded in New York, 1821). Methodists everywhere tended to be involved in reform movements.

In the South, Methodism was more complicated. Here, churches often depended upon the financial support of slave owners, and in response to northern criticism, ministers developed biblical defenses of slavery. Still, ministers in Georgia and other southern states enthusiastically evangelized among slaves. In fact, many Methodist congregations in the South were biracial — a practice that would end with the Civil War.

With an issue as significant and as sensitive as slavery, it was only a matter of time before it intruded into the proceedings of the church’s national governing body, the quadrennial General Conference of the Methodist Episcopal Church. At their 1844 meeting in New York City, delegates submitted a resolution calling on Andrew to “desist” in his slave ownership or otherwise step down as a bishop. It passed by a vote of 110 to 69.

The precise question of Bishop Andrew’s status as a slave owner remains somewhat murky, and it’s one that is explored thoroughly in Mark Auslander’s The Accidental Slaveowner: Revisiting a Myth of Race and Finding an American Family. While there is no public record indicating he ever purchased slaves, his first wife (deceased) and second wife did bring slaves into the marriage, making them legally his property. On the other hand, it is also claimed that he “deeded them back.”

And there is the case of the slave Catherine Boyd. According to Andrew, Catherine’s original owner, “an old lady in Augusta, Ga., bequeathed to me a mulatto girl, in trust, that I would take care of her until she should be nineteen years of age, and with her consent I should send her to Liberia.”

On her 19th birthday, she reportedly made the decision to stay in Georgia, and according to Andrew, “of her own choice remains legally my slave, although I derive no pecuniary advantage.” Since Georgia forbade emancipation, her status as chattel property remained unchanged. In short, according to Andrew and his defenders, his involvement in slavery was more a matter of circumstances, or “accident,” than acts of will. 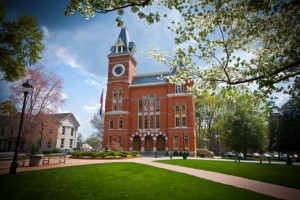 It was at Oxford College, led by Bishop James Osgood Andrew, that the Methodist Church broke apart over the issue of slavery.

The resolution against the bishop outraged southern Methodists who saw it as an assault on the bishop’s and the South’s honor, as well as a revealing indication of the North’s ultimate intention of eradicating slavery entirely. The next year southern Methodists implemented a “Plan of Separation” that created a new Methodist Episcopal Church, South, with Andrew as presiding bishop.

The reverberations of the break were felt everywhere. For one, it was impossible to insulate national politics from Methodism. There were three political parties in the United States, “if you count Methodism,” it was said. Senator Henry Clay of Kentucky dubbed the split an “example . . . fraught with imminent danger” and given the tensions already existing, “its tendency . . . perilous and alarming.”

The church’s schism is another defining movement on the nation’s road to civil war, one imbued with all the complexity, emotion, and resort to ultimate beliefs that secession would present. It may be impossible to separate the two.

Looking back on the case of Bishop Andrew of Oxford, the events surrounding Methodism’s founding and development come full circle: from Georgia, to the nation, and back to Georgia. 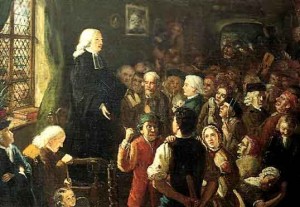 John Wesley, the founder of Methodism, practiced his itinerant ministry in the Georgia colony from 1736 to 1738.

And perhaps we can see in this story the consequences of personal decisions.

It is said that Bishop Andrew actually wished to resign, to avoid a schism in the Methodist body, but instead gave in to the pressures of southern clergymen.  Admired by all who knew him, he even chose to remain on good terms with other bishops in the North afterward.

As NGE author Tom Scott asks, “I wonder if history might have followed a different path if people like Andrew had stood up to their more emotional colleagues and had taken a stand for peace and unity in the church (and nation)?”

The northern and southern branches of Methodism would not rejoin until 1939. Wesleyan College in Macon is named in honor of John Wesley. Bishop Andrew is buried in Oxford; Andrew College in Cuthbert, Georgia, is named after him. Emory University was established in Atlanta in 1915. Today, Oxford College, in Oxford, is part of Emory University, offering the first two years of a student’s liberal arts curriculum.