U.S. Senators Saxby Chambliss and Johnny Isakson hope their “gang” will have 60 members by year end

One of the original members of the Gang of Six, U.S. Sen. Saxby Chambliss, spoke to the Atlanta Press Club Monday when he restated his commitment to work on reducing the nation’s growing debt and its fiscal problems.

The Gang of Six has adopted many of the recommendations that were part of the White House’s National Commission on Fiscal Responsibility and Reform that was co-chaired by Democrat Erskine Bowles and Republican Alan Simpson.

Chambliss quoted Bowles who has called this “the most predictable economic crisis in the history of our country.”

Much of the nation’s fiscal issues will come to a tipping point by the end of the year when the Bush tax cuts are set to expire and when the country will have to face another vote to increase its debt ceiling. 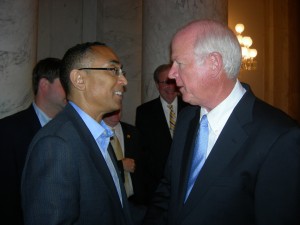 “We are going to have an election in November,” Chambliss said. “It makes no difference who will get elected.”

What has not received much attention is that the Gang of Six has now grown to the Gang of 46 senators from both political parties.

“We have 46 senators with us — senators who have signed a statement of intention,” Chambliss said. A meeting is planned on Tuesday in the U.S. Senate to try to increase the ranks of senators willing to tackle the nation’s toughest fiscal problems.

“We are kind of the only game in town,” Chambliss said. Asked if his group had identified another 14 senators to join the “gang,” Chambliss said: “We are not there yet.”

Last week, U.S. Sen. Johnny Isakson spoke to a group of 110 metro Atlantans who were on the LINK trip to learn more about how Washington, D.C. is working on its transportation and economic development issues.

Isakson brought up the fact that the “Gang” now had 46 members — half Democrats and half Republicans, and that he too had joined the Gang.

“We will support bringing it forward,” Isakson said. “We hope there will be more than 60 of us in the Senate. If you have 60 members, you can do anything. We can not keep kicking the can down the road.” 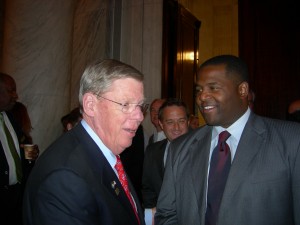 U.S. Senator Johnny Isakson greets Ceasar Mitchell, president of the Atlanta City Council, who was in Washington, D.C. as part of the LINK trip

Isakson said he actually has “a little glimmer of hope” that in the second half of the year Republicans and Democrats will be able to start working together to reduce the nation’s debt.

Senators may end up finding a way to agree “to jump off the cliff and do what’s right.”

As for himself, Isakson said: “I’m reading. I’ve signed up.” He then added that he hoped corporate America would support the bipartisan effort.

Chambliss also seemed to understand that his strong stance to try to find bipartisan solutions on the nation’s fiscal problems has cost him political support.

“I don’t care,” Chambliss said of the “arrows” that he has received. “I care about this country…. I just think if you do the right thing, the politics will take care of itself.”