With service in their marrow, metro teacher gets transplant from British student

As a teacher, Asa Valente was matched to a metro Atlanta school where more than half the kids live in poverty.

“Everything is hard the first time,” she tells her fourth graders at Berkeley Lake Elementary in Duluth. “Don’t give up. Keep pushing. Don’t say that you can’t, because you can. Be patient with yourself and don’t get discouraged. Hold yourself up and keep trying.” 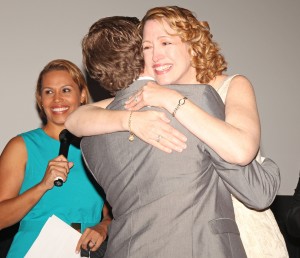 The lives she touches there, for eight years now, were in the balance when the usually fit and healthy Valente barely made it through a field trip in May 2010. The children (and their typical classroom germs) prevented her from returning to work as she battled acute lymphoblastic leukemia

“Part of why I teach is because I knew I wouldn’t have children of my own,” said Valente, 44, whose husband died in 2006. “Teaching is a two-way street – you give a lot, and it comes back to you too.”

To stay in the classroom as a vibrant, inspired teacher, Valente needed a stem cell transplant. This forced her to live out what she had been teaching her students, and put her in the path of a stranger 4,200 miles away who was using education to help people survive.

Last weekend, at the third annual Tribute Dinner sponsored by the Be the Match Foundation  (which pairs marrow donors with people with leukemia, lymphoma, sickle cell and other blood diseases), Valente met that stranger who donated his stem cells for the first time.

“I like being challenged mentally and feeling like I’m constantly learning,” said Edward Collier, 22, from Imperial College London.

Asa means “healer;” the cells that saved her future came from that source.

“It sounds cliché, but I want to help people,” said Collier, a year away from graduating, with career plans in hematology (blood specialist). “I want to look back at my life and know that I’ve made a huge difference with thousands of people. That would be a great thing if I am able to do it.” 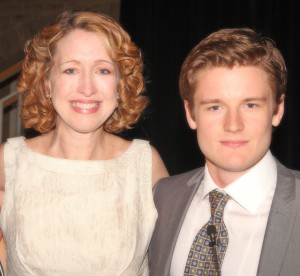 Often we think of stories like these as a straight line from donor to recipient, a tightrope of good fortune or faith.

With both Valente and Collier in service professions, the story of the gift is more of a radiant circle. Their bond touches her students and his patients, their families and beyond. For them, giving is not just a word or body of knowledge, it is in their DNA.

“I think it’s more like a pebble skipping over the water, and creating ripples for everyone’s lives,” Valente said. “By being a donor, he’s my life’s pebble.”

A few days before their embrace,  national TV anchor (and former Atlantan) Robin Roberts highlighted stem cell transplants by receiving one from her sister as she fights myelodysplatic syndrome. Be the Match, which is the official registry in the United States, saw a 1,800 percent spike in donors after Roberts encouraged action, especially among African-Americans and minorities.

Collier had his mouth swabbed because his roommate was leading a drive for donors. He thought his odds of matching were slight.

But Tiffany Friesen, Atlanta director for Be the Match Foundation, pointed to a greater likelihood. A quarter of U.S. transplant patients receive marrow from donors in other countries, and a quarter of the marrow donated in this country benefits patients internationally. Be the Match coordinates marrow registries in 29 countries. (Local contact: Salisha Young, 404-377-4430).

By donating cells to Valente, even before becoming a doctor, he has already lived up to his college’s mission: “Making a demonstrable social impact through the translation of our work into practice worldwide [and] to engage with the world and communicate the importance and benefits of science to society.” 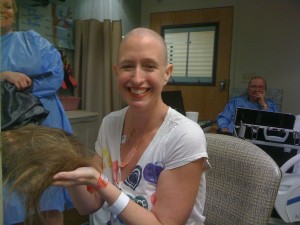 Asa Valente spirits flagged when she was told that her leukemia had compromised her immune system to the point where she could no longer teach. Another concern was that her parents (her father is shown in this photo) had to act as her caregivers.

Did he share the potential impact Valente, as a teacher, could make on a generation of students? Many of her pupils come from a nearby trailer park, from families who are new to this country and who are learning what it means to survive, too.

“When you put it like that, I suppose so,” he said. “But I can’t say that my part was anything more than a small effort. I didn’t do anything compared to her.”

Without him, though, Valente would not have the stability she feels as she continues chapter two of her life. After her husband’s death, and the acceptance of not having children of her own, she got her master’s degree in education and moved from paraprofessional to full-time teacher.

She also found a romantic match online. She met Carlos Campos four months before her diagnosis. After her transplant on Oct. 22 — which doctors told her raised her survival rate from 50 percent to 75 percent– they became engaged in May. 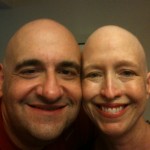 Asa Valente, right, with Carlos Campos, who she matched up with through an online dating service in early 2010. Four months later, she was diagnosed with acute lymphoblastic leukemia. By mid-2010, chemo made her match his baldness.

“She was amazing, strong and courageous going in,” said Campos, a spokesperson for the Atlanta Police Department. “What it did change, perhaps, is her – and mine, too – outlook on life.

“We realized life is a gift. We cannot squander it. We savor every moment together. Every time we hike, we stop and breathe the air, admire the trees, or the deer we may see on the trail. You don’t appreciate life until you experience the kind of loss – and near-loss – that she has.”

That perspective she brings daily to Berkeley Lake, among committed teachers and friends who donated blood and platelets, gave her rides to chemo, brought her delicious food and contributed to a fund to have her house cleaned thoroughly when she came home from the hospital.

In turn, what could she give to the person who had given part of him to save her future? She settled on an engraved Road ID bracelet, with a powerfully modest quote from Charles Dickens worthy of dedicated teachers and doctors-in-training:

“No one is useless in this world who lightens the burdens of others.”