For Mother’s Day, honoring the singular toughness of Rochelle Bozman

You were playing arcade games at Manuel’s Tavern with some of your friends the last time I saw you, at the wake after your mom, Rochelle Bozman, died. Now it’s your first Mother’s Day without her, a holiday that’s all about sentimental flowers and mushy cards. 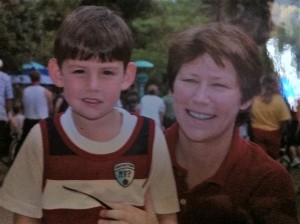 Rochelle Bozman wasn't a traditional mom, or traditional single mom, but she knew she didn't need to be. (Family photo)

Hopefully it’s a day when you remember how your mom busted the touchy-feely idea of momness. Because she was so wonderfully obstinate, you’re here today, the best proof of how singularly tough she was in the world’s hardest job.

In the office where your mom and I met, we saw how hard-core independence turns some people into loners. Instead, she used that determined streak to defy her critics and become your mom.

You’ve heard the start of your story many times by now: 10 years ago, your mom asked to adopt a kid who was hard to place. She prepared a room for an African-American boy aged 7 to 10.

But when the social worker called, that carefully laid plan was scrapped. Could she come to Grady Memorial Hospital right away and pick up a newborn?

A few days later, we brought over baby furniture that our children had outgrown. Rochelle sounded exasperated. Not about you – about the warning people had given her, over and over: “A baby’s really going to change your life.”

“I know that,” your mom sputtered as she cooked us a thank-you lunch of brats in beer. “I want my life to change.” 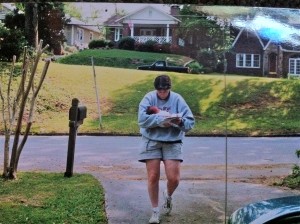 Shortly after Rochelle Bozman brought her newborn son home from Grady Memorial Hospital, she had to learn quickly how to care for a baby she didn't expect to have. (Family photo)

And so you became her son. While our paths did not cross much as you grew up, your mom remained part of a core of newspaper alumni who stayed connected out of friendship and respect.

Daily journalism – in this case, on the Atlanta Journal-Constitution’s metro desk — attracted a lot of stubborn characters with a collective mission to right the wrongs of society. Even in this crowd, your mom’s B.S. radar stood out. She held her ground as the editor on the Olympic bombing stories. She was unafraid of standing up and taking responsibility in the face of enormous criticism.

“In daily news meetings, she would take the most pompous of the newsroom characters and puncture [that ego],” her boss at that time, Mike King, said at the wake. “Her spirit of fairness and dedication to what she knew was a good story was exceeded only by her sense of humor.”

One Christmas morning, Rochelle was in charge of Patti Ghezzi, a reporter who expected to read magazines and put her feet up. Instead, your mom told her to get typing.

“She wasn’t a pushover – we were going to find news and write about it, no matter what,” Patti said. “We found the mail man who works on Christmas, the people who go to the movies and the family whose house burned down and said, ‘Gifts aren’t what matter anyway.’”

“She was like a mama bear when it came to her reporters – she was tough,” said Rhonda Cook, who you know as your mom’s best friend. “She was funny too, like comedian Paula Poundstone on ‘Wait, Wait Don’t Tell Me.’ “

Ron Martz, who reported to your mom during the 1996 games, recalled her nickname for her team. “We were covering security, neighborhoods and Olympic traffic,” he said. “That made us the SNOT pod.”

Don’t forget your mom’s legendary trick on the neat-freak editor, who thought he had achieved ultimate tidiness until he found his entire desk – even his paper clips – wrapped in tin foil.

Your mom was resourceful, too. On the Fourth of July, she kept you connected with her relatives with those long road trips back to Morning Sun, Iowa in the red Jeep. 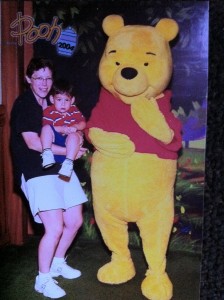 Rochelle Bozman was a nontraditional mom who did all the traditional things parents do, like special photos with storybook characters. (Family photo)

Your grandparents had always told her to never let anyone tell her she couldn’t do something. That stubbornness had led her and fed her on the first risky road out of the Midwest.

“After college graduation, she he left with $50 and six interviews for jobs on the East Coast,” your uncle, Jeff Bozman, said at her wake. “She slept in the car all the way there, and freshened up at gas stations along the way. She avoided toll roads because she was too poor to pay for those.

“There was never a question that she didn’t know what she was doing. She was fearless.”

In Atlanta, she made a family for you from people with no blood ties, people whose commitment to you rivaled the bond of shared DNA.

When your mom traveled for her work as an anti-trust attorney for the Department of Justice, she would send out an email with time slots that her friends would take, divvying up your care. “They would go fast, too,” said one of her law professors, Anne Emanuel, who will always be a close friend of yours.

When your mom got sick with stage four ovarian cancer in late 2009, she had to ask for the ultimate favor – someone to take care of you after she was gone. That’s when your new Atlanta family – who knew you as a friend of their sons – stepped forward to become your guardian. 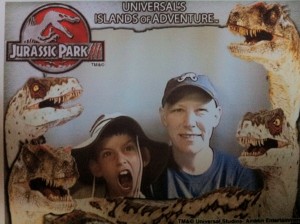 With her head bald from chemo, Rochelle Bozman took her son to a theme park for what apparently was a great time. (Family photo)

Your final goodbye, before she died on Nov. 2, had to have been tough. Rhonda said you snuggled at hospice after trick or treating, to show Rochelle your costume and candy. There were tears, and talk about how amazing you are. Tough like she is.

Many of us choked up at one of her last comments, that she regretted she wouldn’t be there when your heart is broken for the first time and when you first crashed your car. The photos at the wake showed how determined she was to live for you, especially in the photo of her, bald from chemo, at your Jurassic Park theme park vacation.

Your mom was only 50 when she died. In her obituary, her blood family wrote that she would want her legacy to be you “to thrive in the unlimited love and affection of the ‘village’ that has helped raise him so far.”

I bet your mom would like that you are doing just that, and I think she knows that you are making it. You’ve inherited so much of what was good in her, because the people she invested in are now investing every day in you. One of them quoted Elizabeth Stone, that “Making the decision to have a child is momentous. It is to decide forever to have your heart go walking around outside your body.”

You’re that heart now, and it’s a great heart — a tough heart, a funny heart. A heart that any mother should want to have.

P.S. Your mom wrote about your last Mother’s Day together here.