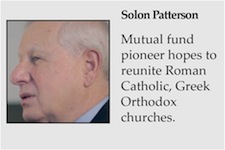 Retired CEO and Chairman of financial firm Montag & Caldwell, Solon Patterson’s Moment led him and his wife to dedicate the rest of their lives to trying to reunite two Christian religions that split nearly 1,000 years ago.

Solon and his wife, Marianna, married in 1960 – he was Greek Orthodox and she was Roman Catholic. That difference would present challenges to their new life together, although on their wedding day, they didn’t realize how many challenges there would be.

They married at Atlanta’s Catholic Cathedral of Christ the King and later moved to New York, where Patterson got his jumpstart in the investment industry, crunching numbers on Wall Street for the kind of high-profile deals a young portfolio manager dreams.

Then one Sunday right before their first Christmas together, they discovered their first issue with their churches. “I found out for the first time in my life, my status in my church had changed drastically,” Solon told us in our accompanying Moments interview..

When the priest saw Solon’s wedding band, he asked if he had been married in the Orthodox Church. Solon said he had not and the priest replied that he could not offer Patterson communion.

“Suddenly the ceiling just fell down on my head – I was totally flabbergasted,” Solon said. “It was my own fault, I just didn’t know that’s what the situation would be when I got married outside of my church.”

Solon and Marianna petitioned the Greek Orthodox Church to marry a second time in its church and, after some procedural wrangling, were able to proceed with the ceremony and their separate faith practices. The couple usually attend their separate churches on Sundays, but often go to ceremonies together, one each in the Catholic and Greek Orthodox churches.

In 1962, while working for Piedmont Advisory Corp in New York and rising through the ranks as a young professional, Patterson got a call from Montag & Caldwell in Atlanta with a job offer. At first hesitant to leave his successful career in New York, he accepted the position and returned to Atlanta when he learned of the opportunity.

He would become a pioneer the in investment field in Atlanta, establishing the state’s first mutual fund, which soon set a remarkable track record – ranking in the top 10 percent for mutual funds. His own stock rose due to his inherent strategic nature, his commitment to due diligence and his determination to achieve results. He eventually rose to CEO and chairman of the firm.

That same strategic determination continued outside the office and now, in retirement, guides him on a global mission to resolve a historic religious dispute. Solon and Marianna were invited to a meeting in Constantinople (Istanbul) in 2004 with the Catholic Pope and the Orthodox Patriarch. During that meeting, they learned more about the thousand-year history of the division between their churches that started with the Great Schism. In 1054, Christianity essentially split into two branches because of an irreparable political dispute that began with the crowning of Charlamagne, King of the Franks as Holy Roman Emperor in 800 by Pope Leo III.

Though there were already hindrances – such as geography and resulting language barriers – the crowning of Charlemagne severely damaged relations and prompted a formal separation. Pope Leo and Patriarch Michael each ex-communicated each other, a formal and final separation that forbade the two churches from working together. At the Constantinople meeting in 2004, Solon and Marianna learned to their surprise Pope Paul VI that and Patriarch Athenagoras I of Constantinople had formally removed the ban in 1964.

“This created a crack in the wall,” Solon said. “I realized at that meeting that there was an opportunity for these churches to someday get back together. My wife and I decided this is something we wanted to pursue to our fullest extent possible.”

At that Moment, Solon and Marianna agreed to make it their life’s mission to facilitate the reunion of the two largest Christian churches in the world. “We decided it absolutely should happen and furthermore I’m convinced that it will happen someday.”

Combining the two churches would bring together the 350 million Christians of the Christian Orthodox Church with the more than 1.3 billion of the Catholic Church.

“It would send a signal to the rest of the world that putting the mission and the purpose that Christ brought into the world is above other elements of politics and divisions,” Solon said. “It would also be a strong rebuttal to the many threats to Christianity in the world.”

They returned to Constantinople in 2006 and met again with the Catholic Pope and the Orthodox Patriarch. His retirement a year later provided even more time and effort for their mission. They started by inviting the leaders of each of the churches in Atlanta to dinner at their house. “Fortunately they got along very well together,” Patterson said.

With the support of the Catholic archbishop and Greek Orthodox Metropolitan and their aids, they are alternating prayer services at the Greek Orthodox churches and the Catholic churches in Atlanta and in New York, the couple has set up a center at Fordham University to further aid in guiding the reunification. The Solon and Marianna Patterson Triennial Conference on Orthodox/Catholic Dialogue is now approaching its third session.

As Solon told us, the vision of the two churches coming together will probably not happen in his lifetime. But at that Moment when he and Marianna met the Catholic Pope and the Orthodox Patriarch in Constantinople, he knew it was something that would ultimately happen and that he had to commit his life to doing whatever he could to ensure others saw this reality as well.

“This has definitely become our mission for the rest our lives and we feel that we were brought together in marriage for this purpose as we think about it more and more. We really believed we have been called to this effort.”

Next week in Moments: a special holiday look back at a year of Moments.