People of all walks of life are being asked to weigh in on the vision for the future of 3,500 acres of land in southeast Atlanta and southwest DeKalb County. The area is described as a place  “where nature is woven into the built environment, encompasses a tree canopy of  more than 60,000 native trees as well as the South River and its tributaries. 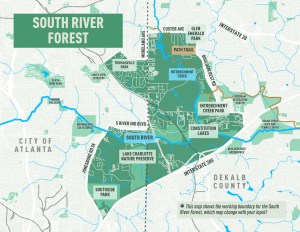 It is the first time in 70 years when, under the ARC umbrella, there’s been such a concerted effort by Atlanta and DeKalb County to explore how best to protect and develop the largest green oasis in the region.

“Conversations have been happening for about 70 years,” said Mollie Bogle, ARCs project manager of the South River Forest consensus building and stakeholder engagement process. “It’s a path that hasn’t been tried before.”

Creating a community-led vision and plan for an area that touches several different government entities presents both complex challenges and opportunities.

DeKalb County Commissioner Larry Johnson, who represents much of the South River Forest area, said he’s been involved since 2003 when he helped the county purchase 277 acres and when he explored a partnership between Atlanta and DeKalb. 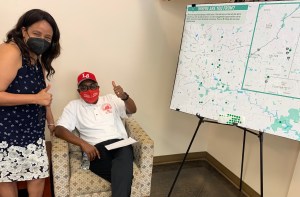 “When I first got involved with this process, I talked with [Atlanta Mayor] Shirley Franklin and Ceasar Mitchell [president of the Atlanta City Council] about creating a regional park,” Johnson said on Saturday.

While that regional park never came to fruition, people involved with the ARC community engagement process believe all ideas are on the table.

“I’m looking forward to sitting down with diverse minds to discuss equity, saving our forests and economic development,” said Johnson, who added equity will be part of the discussion. “It’s good to have us coming together at a common table where we can share hopes and aspirations as opposed to talking against each other.”

Over the past couple of years (and long before), several issues have divided the community and local governments. There was the controversial land swap of DeKalb County park land for the expansion of Blackhall Studios, and the plans by the Atlanta Police Foundation to build an equally controversial public safety training facility on 85 acres of the former Atlanta Prison Farm. Both those projects are within the South River Forest expanse. 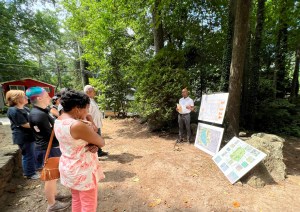 Actually, the problems in that part of our region date back decades. Numerous landfills and industries have impacted the lives of residents while polluting the South River Forest. Community organizations like the South River Watershed Alliance and the South River Forest Coalition, are working to reverse that degradation and are advocating for a healthier environment.

“For decades, this part of Atlanta and DeKalb have been a dumping ground,” said Deron Davis, executive director of the Nature Conservancy in Georgia. “At this time, there’s an opportunity to connect greenspace with trails and allow for economic development that might not have otherwise occurred. Environmental protection and economic development are not at odds with one another.”

Davis would like to see the process lead to a “broader understanding on both sides of Moreland Avenue — meaning Atlanta and DeKalb — on an incredible asset they share, and how they can work together with elected officials to realize greater environmental and economic benefits for the greater community.”

A complexity with the public safety training center and the Atlanta Prison Farm was that the City of Atlanta owned the land that was completely within unincorporated DeKalb County. When the project was announced, there had been little to no community engagement among residents living in the area. The land was outside of the City of Atlanta’s Neighborhood Planning Unit structure, so there was no formal mechanism to get people engaged.

Doug Shipman, president of the Atlanta City Council, became aware of the divide when he was running for office. Ryan Gravel, “an old friend,” made him aware of the project, and how it was not consistent with the vision for the 2017 “Atlanta City Design: Aspiring to the Beloved Community.” The Atlanta City Design, which Gravel helped envision, called for a 3,500-acre South River Park — an area as significant to the region as the Chattahoochee River Park.

“Had we had better community engagement around the police training facility, I think we would have had a better outcome and better acceptance,” Shipman said. “But it’s never too late, especially when it’s this big and this important.”

“I believe that any type of city and county investment requires meaningful community engagement,” Davis said. “We have seen that in this area, when that doesn’t happen, there’s never-ending frustration.” 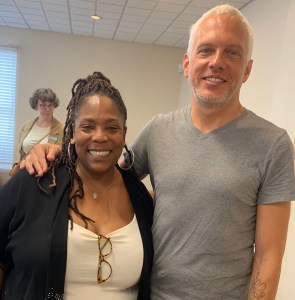 Renee Palmer of the Nature Conservancy with Ryan Gravel. (Photo by Kelly Jordan.)

When asked about the ARC community engagement process, the Atlanta Police Foundation decided not to comment.

Many believe, however, it’s a new day for the area.

“Historically in planning, it’s not unusual for an event to trigger something like this,” Bogle said of the community engagement work. “We are really excited about the possibilities for the process.”

On Wednesday, the ARC Steering Committee on the South River Forest will hold its first meeting and bring together 37 members representing various governments, local neighborhoods and stakeholder organizations. The steering committee will have two follow-up meetings in July and August.

Meanwhile, Davis and Bogle would like for as many people as possible to get involved in the process – by going to the website to see the various ways they can become involved. Public comment will continue through September or October. Bogle said the goal is to complete a report by the end of the year. The whole process is valued at $150,000, including ARC staff time and resources as well as a $10,000 grant from DeKalb County.

Shipman said he was glad the ARC is involved because its focus is broader than one jurisdiction. He hopes the process will help build trust among the various players involved. 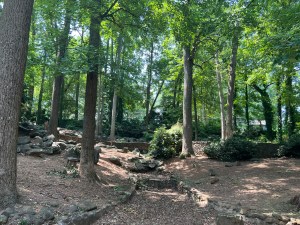 The rock garden at Glen Emerald Park is a gem that is part of the South River Forest. (Photo by Maria Saporta.)

“It takes time. Trust is always built on transparency, relationships and a good process,” Shipman said. “I hope that with a broad group of stakeholders working together, we can sustain this effort over time. From my own perspective, I hope we get a clear perspective of what the city of Atlanta can do, what the counties (Fulton and DeKalb) can do, and what the state can do.

The City of Atlanta and DeKalb County could explore ways to jointly oversee the South River Park, either through an intergovernmental agreement or a joint governing parks district or authority. Or there could be regional and state involvement in protecting, developing and maintaining the area.

“The single most impactful outcome that can be realized through this process is greater cooperation among the governments involved,” Davis said. “The role of the Nature Conservancy is to be the keeper of the vision and to do everything we can to engage everyone in that vision.” 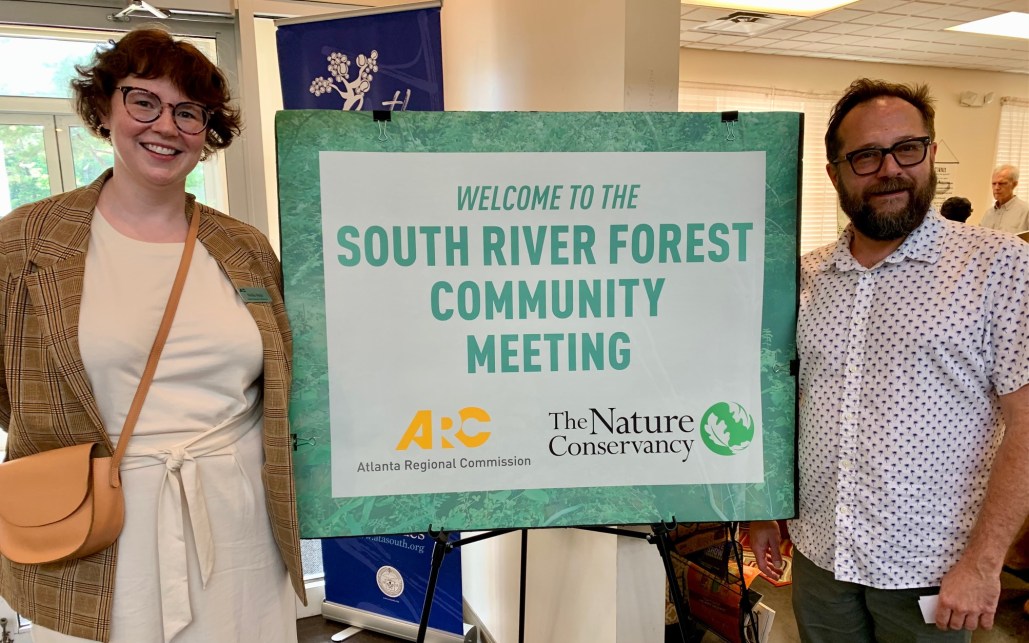 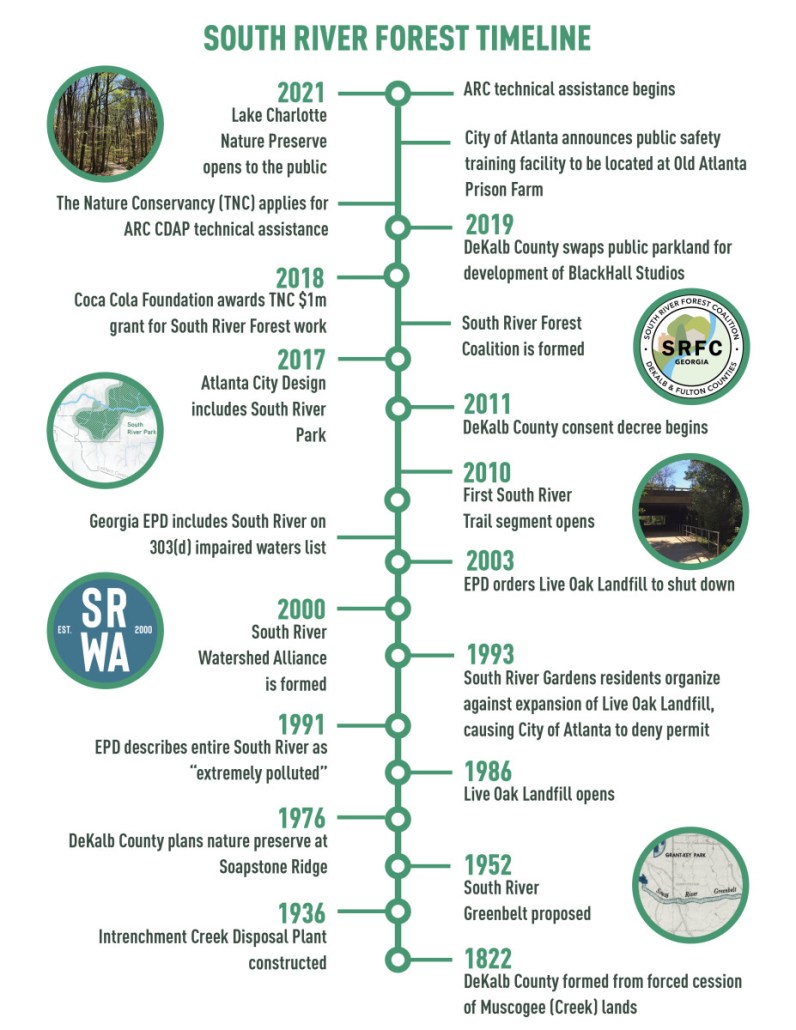