If you like bird watching, hiking or just spending time in nature, Fayetteville’s Sams Lake should be added to your list of summer destinations, thanks to the hard work of two local environmental nonprofits. 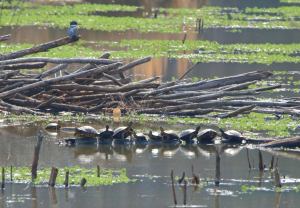 A Belted Kingfisher, one of the 142 bird species at Sams Lake, perched over sunbathing turtles. (Photo courtesy of the Southern Conservation Trust.)

The 56-acre site was donated to SCT by the Sams family in 1997 and is one of eight parks that SCT owns. The natural oasis is home to deer, beavers, turtles and 142 species of birds — the third-highest bird population on record in the county.

With such a high bird population in the area and the designation as an Audubon Certified Bird Sanctuary, Georgia Audubon felt like a natural partner for SCT.

SCT and Georgia Audubon have made a concerted effort at Sams Lake to remove invasive plant species — terrestrial and aquatic — and replace them with native plants.

The area used to be a drained lake bed but is slowly reverting back to a wetland as the waters connect to the Flint River. In 2001, the City of Atlanta opted to restore the area as part of a required mitigation for the wetlands disturbed by a new runway at the Hartsfield-Jackson Airport, which sits at the headwaters of the Flint River.

“Insects are the bridge between plants and birds in many ways. Many insects need specific plant species and [otherwise,] they might not be able to survive,” Andrle said. “And what do over 95 percent of our bird species rely on to feed their young? Insects. If the insects are declining, our birds are not able to reproduce successfully.”

These invasives are being replaced by native plants like persimmon, silky dogwood, river birch and highbush blueberry. The two teams added roughly 1,000 plants to Sams Lake in the last planting season, and now they’re taking precautions to ensure that local deer and beavers don’t nibble on the growing plants by installing fences around some of the new growth. 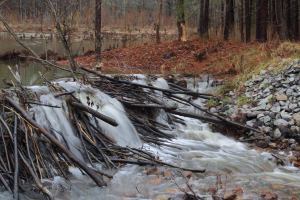 Sams Lake’s terrain is unique thanks to resident beavers, offering different habitats and animal sighting opportunities depending on the status of the beaver dams.

“There’s a massive beaver dam that’s five or six feet tall, and sometimes that beaver dam will wash out, which drastically changes the water level in the Southern lake on the property,” Andrle said. “Sometimes you’ll visit, and there’ll be almost no water in that section, which allows for certain migrating bird species to use the mudflats that are temporarily exposed. Then the beavers fix the dam, and that water fills up, and a whole different array of bird life can come in.”

The two organizations are proud to be recognized by the Georgia Water Coalition as champions for the state’s natural environment.

“It’s a huge honor,” SCT CEO and Executive Director Katie Quattlebaum said. “This is significant work that’s happened, and I think that part of the reason we were chosen is because we have two large nonprofits working hand-in-hand to accomplish something.”

Nick Kilburg, SCT senior director of parks and education, added: “It’s been a great project. We’re going to track it through time, and a lot of ecological restoration projects aren’t tracked real closely, but since it’s a property that we own and manage, we’ll be able to gauge our success over two, five or 10 years.” 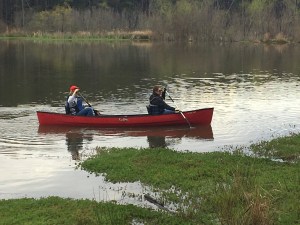 “I expect we’ll see lots of nature photographers out there paddling and taking photographs,” Quattlebaum said. (Photo courtesy of the Southern Conservation Trust.)

The efforts at Sams Lake are ongoing — the plants don’t stop growing — and the SCT team plans to open the waters to paddlers sometime next year. The only hang-up, according to Kilburg, is that the root system of some invasives, like parrot feather, is very dense, making it challenging to navigate the waters.

“Our hope is once we get the invasives removed, we can open Sams Lake up to paddling, which will provide some really neat wildlife viewing and nature photography opportunities that don’t exist yet in the county,” Kilburg said.