Ryan Hidinger’s dream of opening his own restaurant did not die with him.

That dream, which the late chef had shared with his wife, Jennifer, to make a living running their own establishment, has grown into something much larger: a restaurant that will provide financial support to industry workers beset by catastrophic illnesses.

The service industry is the backbone of Atlanta, the reason that thousands of people gather here every year for conventions and big events. However, those who choose service careers – like the restaurants Hidinger worked for and devoted himself to –  are especially vulnerable to catastrophic events. 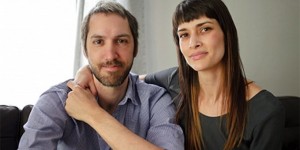 About 250,000 of them work in metro Atlanta, and tend to be counted among those most likely to be uninsured, and hit hardest by lost wages when they lose shifts due to illness. Hidinger, who was diagnosed with Stage 4 gallbadder cancer in December 2012, experienced this firsthand.

On January 26, less than three weeks after Hidinger’s death, more than 800 people gathered at the King Plow Arts Center to push forward the Hidingers’ dream of opening their unique restaurant and funding its associated non-profit.

The attendants had food and drinks prepared by 59 Atlanta area restaurants. They danced to a 1970s light rock tribute band and took part in a silent auction. They watched video presentations and heard speeches honoring Ryan Hidinger and the non-profit organization he helped launch.

In the end, this fundraising party, not a wake, raised more than $325,000, according to event organizers.

“What started as a rally – a fist pumping march – when my husband Ryan was diagnosed with his late stage cancer, morphed into this beautiful non-profit organization meant to selflessly take care of our own when times are hard,” Jennifer Hidinger told the crowd gathered at King Plow. “Because of what the city of Atlanta and our own restaurant community did to help us, I am able to stand here tonight and tell you that bonding together, embracing what’s in front of you with complete surrender is the only way to become the best possible person you can be.” 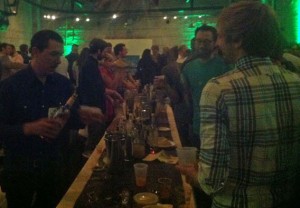 A January 26 fundraiser for a non-profit linked to the Hidingers’ restaurant raised more than $325,000.

The planned restaurant, Staplehouse, is expected to open in an existing building in the Old Fourth Ward possibly this summer. However, instead of simply providing an income for the Hidingers, as originally intended, all of its profits are planned to go to the charitable organization they helped create.

That 501c3, called The Giving Kitchen, is to provide aid for restaurant workers and others in the hospitality industry beset with catastrophic illnesses. The organization began making donations last year from extra funds that had been raised for Ryan Hidinger’s treatment. After he was diagnosed, area restaurants and others rallied to support the Hidingers and held a fundraiser.

For five years, the Hidingers had been working on saving money and trying to attract investors in Staplehouse. Every Sunday, they invited paying guests into their home for dinners to help fund the project. Ryan Hidinger put the project on hold after he received the cancer diagnosis.

Hidinger would later decide not to go silently into that good night.

When Hidinger considered putting off his restaurant plans, his boss, Ryan Turner, encouraged him not to give up. In his previous job as food and beverage manager for East Lake Golf Club, Turner had seen how profits from the restored historic golf course were used to redevelop the surrounding area through a non-profit foundation. Couldn’t the Hidingers adapt that model?

The answer the Hidingers, Turner and other friends, family and associates decided was yes.

Just as the East Lake Foundation created the concept of “golf with a purpose,” Turner said, “the intent (of  Staplehouse) is to create a world-class restaurant that has a purpose and a cause.”

Jennifer Hidinger gave up her children’s clothing store job and began building a board for the Giving Kitchen, which quickly obtained 501c3 status. The organization began distributing extra funds from Staplehouse to other restaurant workers around Atlanta.

“After cancer, everything gets a different lens on it,” Hidinger told the online publication atlantaeater.com in April 2013. “Profits don’t matter. What matters to us is that we’re going to be able to do what we love in one of the best restaurants in the city— hopefully, the country— and help people while we do it.”

The Giving Kitchen could help people because plenty of people were getting behind Hidinger’s vision.

“We’re just blessed. We’re just lucky to have the people around us and in our lives,” Hidinger said in the same interview. 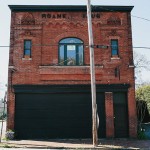 This Edgewood Ave. building will house Staplehouse Restaurant and The Giving Kitchen.

While plans for Staplehouse and Giving Kitchen flourished, Ryan Hidinger did not. His cancer retreated in June 2013 but roared back in the following months. By December, it had engulfed his liver and spread across his lungs, according to an update posted by Jennifer Hidinger on Facebook.

Before then, Ryan Hidinger had continued to appear in public at fundraising events. That included his center court appearance in November at an Atlanta Hawks game to receive an award for his contributions to the city.

In her Facebook update posted two days before her husband’s death, Jennifer Hidinger wrote: “Ryan has no resentment — only appreciation and deep gratitude for the army of people who have stepped up to help us this past year. Ryan wants and will want everyone to celebrate him. Celebrate your own life. Celebrate your loved ones. Live your life. Truly live it. He would be devastated if you allowed his death to bring you down and into a place not full of light and love. I mean this. If given a time machine, he would not go back. The past year was the hardest yet most remarkable of our lifetime.

“’This is just part of my journey,’ is what came out of his mouth just recently,” wrote Jennifer Hidinger.

In his disease management, Hidinger ultimately had to change courses too. Initially, he had fought his disease hard, opting to seek the most aggressive treatment possible for his gallbladder cancer. But it wasn’t about getting more help in the end. It was about letting go, and knowing that you had invested as much of yourself in those you would leave behind.

“Ryan really prepared me for his death,” Jennifer Hidinger said. “This experience opened up my eyes to what death and life is all about. It really is about giving yourself away.”

Dining with a purpose

While Ryan Hidinger is gone, he still seems unmistakably connected to his project. For one thing it is still very much a family affair. His wife will manage the day-to-day affairs of the restaurant and speak for the non-profit. His brother-in-law, Ryan Smith, will be the chef and his sister, Kara, will be a partner in the restaurant.

It will offer simple fare, Ryan Hidinger’s specialty and a menu of 20 items. The restaurant will be located on the first floor of a two-story building on Edgewood Avenue about a block from the BeltLine. The Giving Kitchen will be housed on the second floor.

The recent farewell bash at King Plow is making Hidinger’s vision become even closer to reality. “People are going to be able to dine there and have a great meal,” said Ryan Turner, who chairs the Giving Kitchen board. “But they’re also going to know that the dollars they spend will go to help those in our industry.”
Ben Smith can be reached at benzmyth@gmail.com.