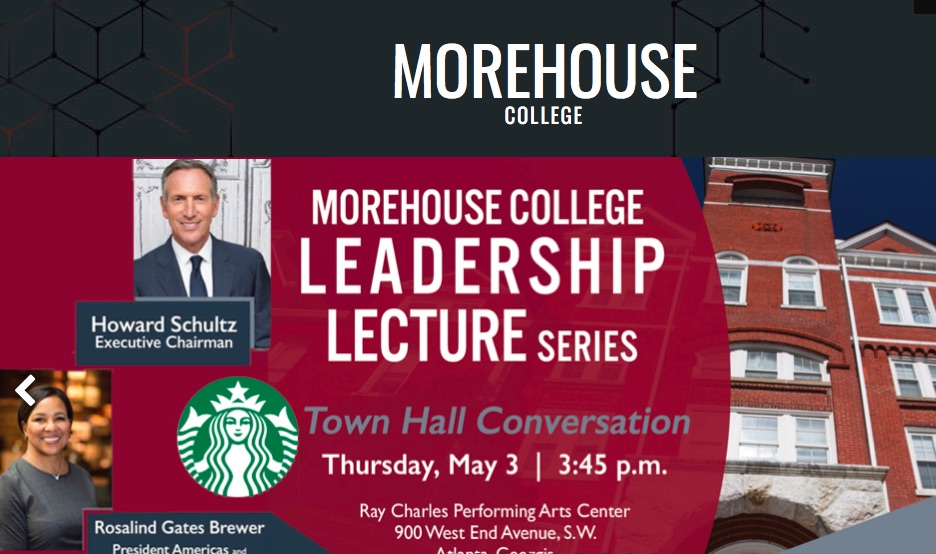 The town hall, which had been planned for month, took place less than a month after two black males were arrested at a Starbucks in Philadelphia for hanging out at the café without buying anything. The manager called the police, who arrested the two men, who said they had been waiting to meet a friend. 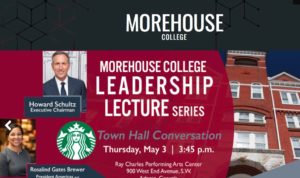 The incident was top of mind at Thursday’s town hall with both executives strongly denouncing the actions of the manager of Philadelphia store.

Schultz called the actions of April 12 “reprehensible” – repeatedly taking responsibility for what happened.

“As a Caucasian male, how could I possibly walk in the shoes of an African-America,” Schultz said. “We live in an age of anger, rage, racial tension and oppression.”

Schultz sounded personally troubled – openly wondering how a company he had founded in 1982 as one based on social values had employees who had behaved so badly.

“We as a company are responsible and culpable with what took place,” Schultz said while sitting on the stage of the Ray Charles Performing Arts Center on the Morehouse campus.

Brewer, an alumna from Spelman who now serves as chair of Spelman’s board of trustees, defended the business culture of Starbucks. She joined Starbucks last September after spending 10 years as an executive with WalMart and its subsidiary – Sam’s Club.

“I was absolutely sure this was a place where I could bring my head and my heart,” Brewer said of her decision to join Starbucks.

Instead of blaming the manager of the Philadelphia Starbucks, Brewer said the company was to blame by hiring a manager who was not prepared for that role.

“We failed by putting her in that position,” Brewer said.

David Rice, associate provost of Morehouse, moderated the discussion, more than once referred to Schultz as being a white billionaire – apparently not buying the answers offered by the Starbucks founder.

Schultz, however, did not become defensive and offered insights on his own beginnings. He said he grew up in public housing in Brooklyn, N.Y., and his parents had a hard time paying the $96 monthly rent. And that experience led him to launch a company that would be a place where people like his father would want to work.

Starbucks will pay for a four-year college education for its employees.

But Schultz said this incident showed Starbucks still had work to do.

“In this situation we were not at our best,” Schultz said. “We made a terrible, reprehensible mistake.”

He also said that almost everyone has  some level of “unconscious bias” – and he said the country was “in dire need” of having an adult conversation on the issues of race.

“We were horrified by what took place in Philadelphia,” Schultz said. “I do believe racism does exist in America. We at Starbucks have the opportunity to elevate the conversation. There’s no doubt in my mind that racism exists in America.”

The company will close all its stores on the afternoon of May 29 to train all of its employees, but Schultz said that was only the beginning.

“It is a long journey nationally and internationally,” he said

Brewer then added the company really wants its people to grow. She said she had talked to the manager of the Philadelphia store for 90 minutes and concluded that she had shown poor judgement, that she had not followed company policies and had called police to soon. That store manager, who has not been identified, no longer works for the company.

“I did not get from her that she was a racist in that 90 minutes,” Brewer said. Then she added: “This cannot be our density.”

At the end of the town hall, Schultz was asked by a member of the audience why Starbucks is not a major donor to historically black colleges and universities.

“This situation in Philadelphia has opened up our aperture…opened up an opportunity to examine our internal practices,” Schultz said. “This incident is less than three weeks old. It’s been very difficult. Everything we are doing needs to be examined.”