Untreated sewage flows into the South River from areas of DeKalb County not addressed by the federal consent decree. Credit: Sue Sanders

This calm stretch of the South River will get easier to paddle — once a pair of access points are built. Credit: Sue Sanders

About 6.5 miles of the South River in Rockdale County will make up the first segment of what could eventually be a canoe and kayak path with access points from south DeKalb County all the way to Lake Jackson.

A new $200,000 state grant will help the nonprofit South River Watershed Alliance and Rockdale County build a pair of trail–access points: one at the county’s Lorraine Park, and one downriver at Oglesby Bridge Road. It all winds through the Arabia Mountain National Heritage Area.

“It’s a very lazy, shady experience on the river. Very relaxing,” said Jackie Echols, the founder of the nonprofit that advocates for the restoration of the river for the benefit of nature and people.

“What adds to the relaxation is having a good put-in and take-out point,” she said. 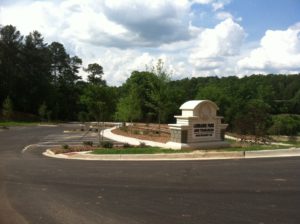 Lorraine Park just needs a bit of work to make it easier to carry boats safely down to the river.

And as much as people already use the landing at Oglesby Road, it’s not built or insured for that. And there’s no place to park except along the busy road. A proper access point with a parking lot will change that.

“It will provide access to the entire natural, cultural and historic area between DeKalb and Rockdale that includes green spaces, parks, dirt hiking trails, paved walking trails for walking, running and cycling, and mountain bike trails that were completed in 2019” from a previous state trails grant, Sanders said in an email.

It will be a place where people can connect to the river in a way that’s different from just standing on the shore. And folks may come to put more value on the river, the trees and the wildlife.

It could be also the source of another kind of value. Sanders is looking for it to bring in tourism, recreation and hospitality spending.

It took more than a year of “worrying” the landowners before they would sell the 1.8 acres for the Oglesby boat landing, Echols said.

But sell they did, eventually.

The county estimates the river trail will be complete by fall 2022.

Echols hopes the trail will attract an outfitter to rent canoes or kayaks. One of SRWA’s goals is to get more people enjoying the river. The other is to clean up the river.

Downstream recreational use may put pressure on upstream neighbors in DeKalb to finally put a lid on their out-of-control sewer spills.

After all, people are going to get very mad if their tranquil river stinks.