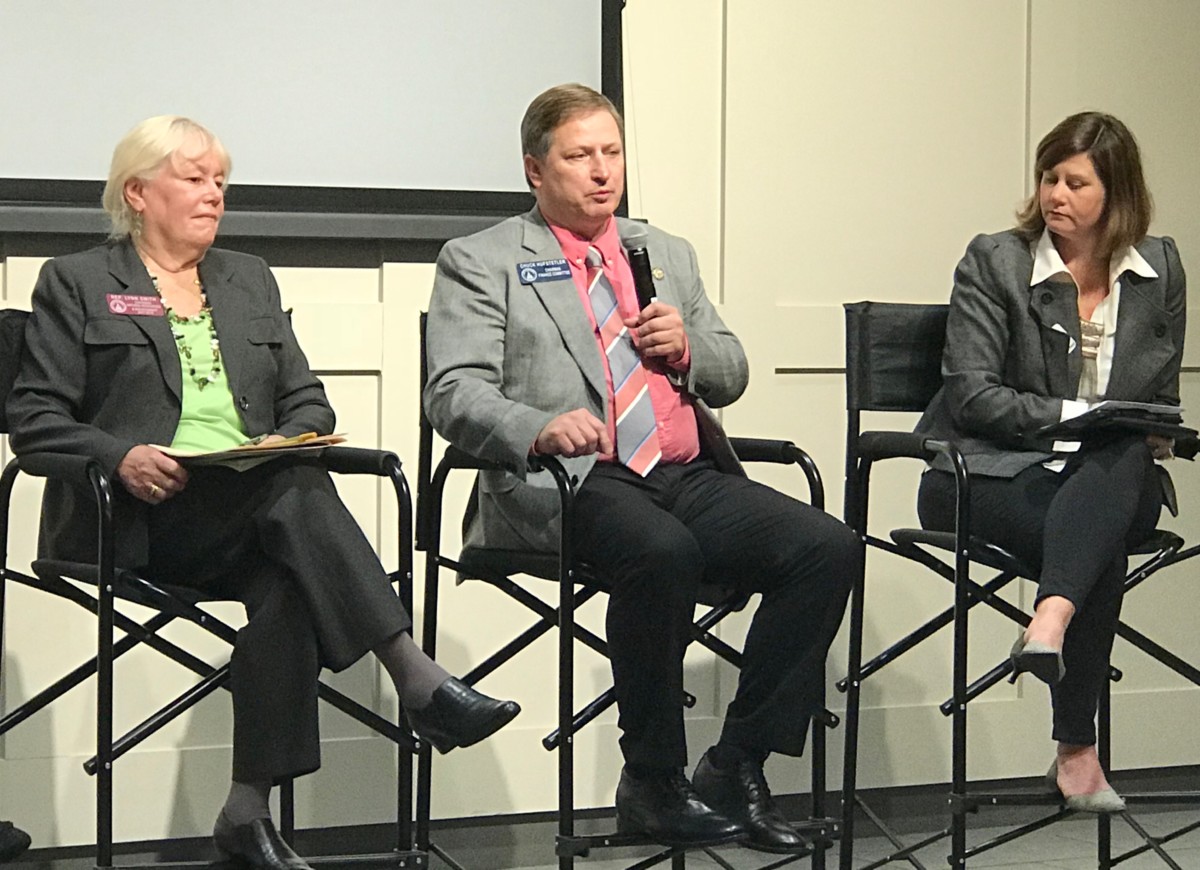 Hufstetler, chairman of the Senate Finance Committee, openly criticized Senate Bill 31 that passed in 2009 that approved the financial plan for Plant Vogtle. It was called the Georgia Nuclear Energy Financing Act, which permitted the utility to begin recovering the costs of financing the construction of the new nuclear plants from consumers before they came on line.

Pointing out that he wasn’t yet in office when that bill passed (he was elected in 2012), Hufstetler said: “It was probably a mistake to go forward the way it did.” 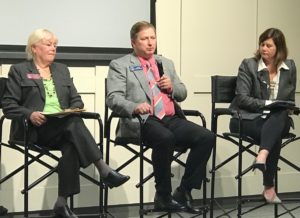 After the SART meeting, which is organized by Southface, Georgia Power was asked to respond to Hufstetler’s comments. The utility’s response is presented in full later in this article.

Hufstetler also strongly criticized the amount of profit the utility would be making from the project’s cost overruns.

Originally – in August 2008, it was estimated that Plant Vogtle reactors 3 and 4 would cost $14.3 billion and would begin commercial operations in 2016 and 2017 respectively. Now it is estimated that that the two reactors will cost $25.2 billion with the first reactor due to go into service in late 2021 and the second one scheduled to be operational in 2022.

Sen. Hufstetler said that because of the cost overruns, Southern Co.’s profit is now estimated to go from $7.4 billion to $12.6 billion – a difference of $5.2 billion.

When asked if he would be seeking new legislation to limit the utility’s profit on the project, Hufstetler responded that he’s looking at options.

“We can still examine the profit (issue),” he said. “There are a lot of things that have happened that we can’t change. (But) we can look at the additional profit going forward. We can revisit the profit.”

Also, Hufstetler said the state can “make sure we put incentives in the right place” when considering future energy investments.

Currently, he said the cost per kilowatt hour for nuclear energy will be 13 cents, compared to 4.4 cents for solar energy.

“We are putting a unit on line that’s going to be three times that cost (of solar),” he said.

He went on to say that nuclear represents 10 percent of our power resources in Georgia, but it will account for 20 percent of the cost of power.

“If our rates are going up and other states are going down, we will lose our competitive advantage,” Hufstetler said. “It’s a tough issue. We do need to look at the consumers in Georgia and protect them.”

After the program, Hufstetler said he was able to get some of those comparative numbers from the staff of the Public Service Commision. 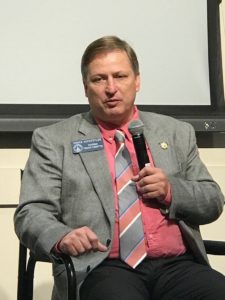 When asked again about whether he would try to get Southern Co./Georgia Power to reduce their profit on the project’s cost overruns, Hufstetler said he would.

“That’s what I would like to do, but that’s a big mountain to climb,” he said. “I do think it needs to be looked at.”

He then was asked whether the utility was aware of his position.

“I think they do,” Hufstetler said. “We’ve had some discussions about these costs.”

The chairman of the Senate Finance Committee was then asked how he felt about the PSC approving the project with the current financial plan.

“I’m disappointed,” Hufstetler said. “I don’t agree you should make additional profit because of cost overruns.”

And when he was asked whether it would have been more prudent for Georgia Power/Southern Co. to have invested in solar rather than nuclear power, Hufstetler responded: “I think so.”

But he then added that solar has its limitations.

“Of course solar can’t do everything,” Hufstetler said, adding that there needs to be other modes of energy used in combination with solar. “I just don’t think this is an economic project. It’s supposed to have a 60-year lifecycle,” meaning consumers would be on the hook for the project’s lifetime.

The decision to complete Vogtle 3 & 4, the nation’s first new nuclear units in 30 years, is important for Georgia’s energy future, ensuring that our state has affordable and reliable energy that will support economic growth now and for generations to come.

Nuclear energy provides consistent, reliable and affordable baseload energy versus other forms of generation. The cost for Georgia Power to generate a kilowatt hour of nuclear energy is 0.85 cents (less than a penny), significantly less than other sources of baseload electricity.

From the beginning of this project, Georgia Power has worked to pursue all available benefits for customers and minimize the impact of the new units on electric bills. The company’s responsibility is to our customers first and we remain focused on fulfilling our commitment to them to deliver a new energy source that will put downward pressure on rates for 60 to 80 years once the new units are on line.

The PSC’s decision continues to protect customers with new penalties for delays and cost increases, and reduces the amount paid by customers by more than $1.7 billion during the construction period. The projected peak rate impact to Georgia Power retail customers is approximately 10 percent, with 5 percent related to the project already in rates – well below original projections of approximately 12 percent.

In addition, the company secured a new conditional commitment of approximately $1.67 billion in additional loan guarantees for the project from the U.S. Department of Energy (DOE). The company also received 100 percent of parent guarantee funds available from Toshiba years earlier than expected and will use every dollar to benefit customers. The parent guarantee payments from Toshiba, in addition to the penalties in place for the company, are contributing approximately $2.75 billion which will reduce the total cost of the project.

“The 0.85 cents they mentioned is only true if you take out the land, construction costs, $12.6 billion profit and financing costs. It will be at least 13 cents for 60 years,” he wrote to SR.

PSC member Tim Echols was in the audience, apparently holding a coffee mug and feeling injured. Above a retweeted picture of Hufstetler, Echols wrote: “That moment when you showed up to a knife fight with a coffee mug. Heading to the ER.”

John Noel, a former state lawmaker and Democrat who is running for the Public Service Commission this year, tweeted that Hufstetler was “giving ‘em hell” and ended his tweet with “Wow.”

In response to another tweet about Hufstetler, Echols wrote: “Certainly caught me off guard. He may be running for [Public Service Commission member] Stan Wise seat.”

Echols, a Republican, has long defended nuclear power in Georgia.  In an August editorial for the Wall Street Journal, he said diversifying the state’s energy supply makes sense because no one knows what the future holds, maybe a carbon tax, maybe tight fracking regulations.

In December, after the PSC voted to let construction on the late and over-budget reactors continue, Echols and fellow Commissioner Chuck Eaton explained their decision in an Atlanta Business Chronicle editorial. They said that the bankruptcy of Westinghouse, the main contractor and designer of the reactors, “has put us in the pickle we are in.” But they added that Toshiba, Westinghouse’s parent, had paid a “significant” penalty of 40 percent of the original contract price.

“That payment made a difficult vote a little better,” they wrote in the December op-ed.

(Updated with comment from Hufstetler in response to Georgia Power.) 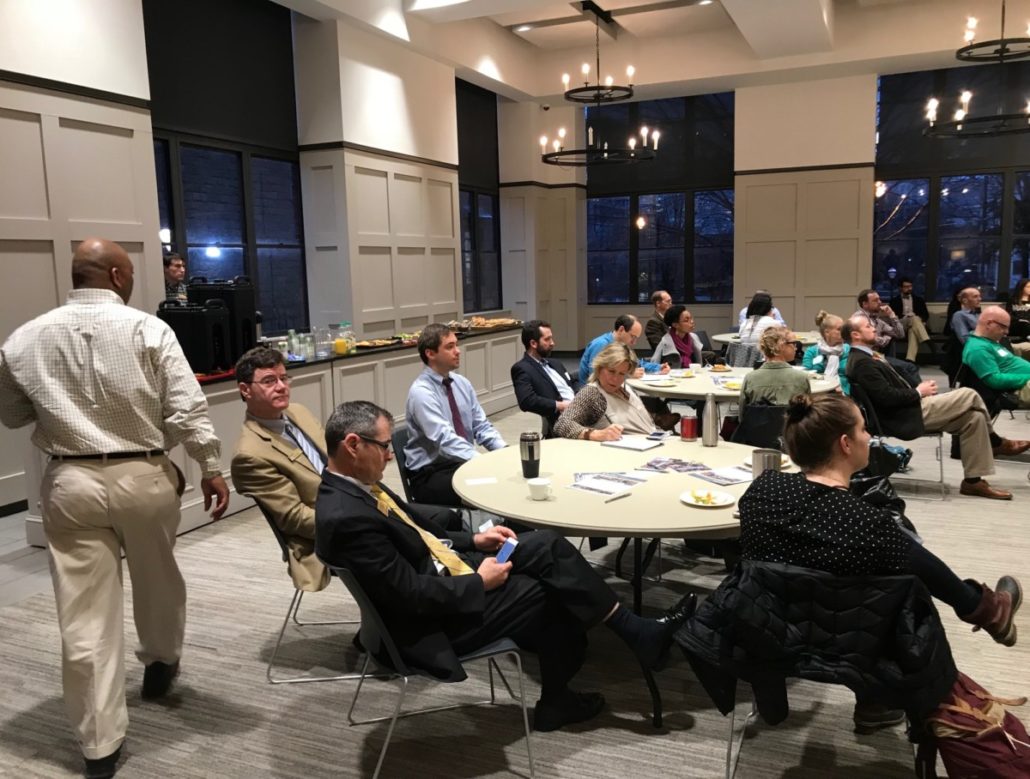