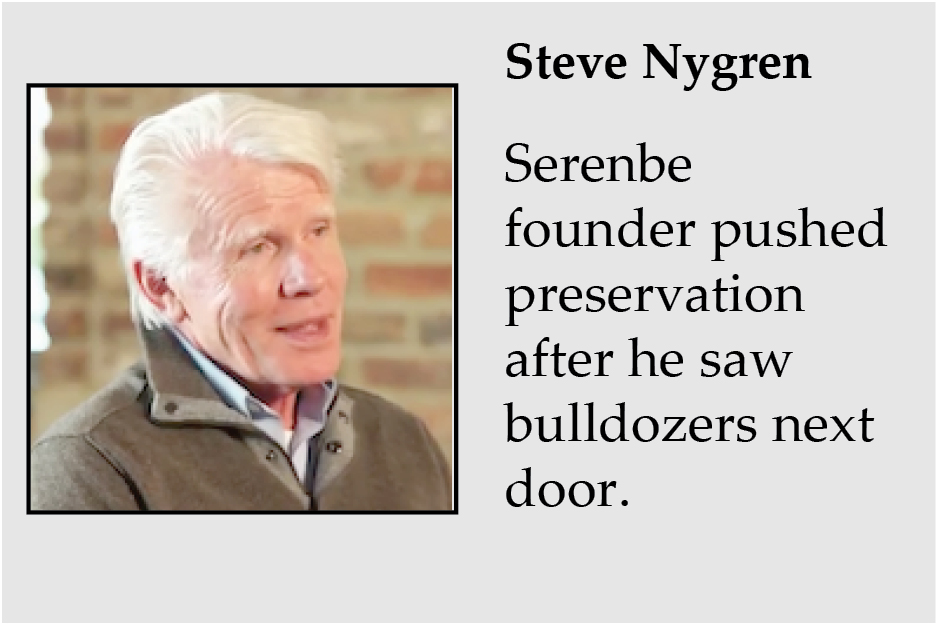 Some real estate developers spend a lifetime plotting to build tall signature towers along our skyline. Others clear land to build shopping centers, apartment buildings or grand houses. Then there are unintended developers such as Steve Nygren, whose decades-long work amidst the rolling farms and forests of Chattahoochee Hill Country in south Fulton County is more akin to a sculptor carefully studying each sliver of stone before slicing it from an eventual masterpiece.

The first time I visited Serenbe a little more than 10 years ago at the urging of my high school classmate Rawson Haverty, Steve was hovering over a computer screen, marveling at the evocative beauty of a new website for Bella Cucina, an Atlanta “artisan food” company. You could tell he was setting a marker his marketing team would have to surpass (they did). Though I had come to record the rolling pastoral hills of thousands of acres along the Chattahoochee River, Steve asked me to wait another hour until a larger group of Atlantans were to arrive before he would show me his real marvel: a three-dimensional architectural model of the hamlet he wanted to build in the 1,000 acres behind his farmhouse.

I didn’t understand the reason for his delay until I watched Steve begin his performance. While the miniature prototype of the bakery, bookstore, gallery and residences was impressive, what really lured this group of women – many of whom later moved their families to Serenbe – was Steve’s passion and vision for what life could be and should be like in metro Atlanta. “We have an opportunity to preserve the thousands of gorgeous woods and farmland here just 30 minutes from the airport,” he told them. “We cannot let this beautiful country be turned into … Alph-a-ret-ta,” he would say, elongating his pronunciation of the city that had at that point come to mean unbridled traffic and sprawl.

Steve Nygren’s Moment had occurred two years earlier in 2000. He and his daughter were jogging along the property line of their newly adopted home. Their land was nestled between other family farms, many of which had been passed down within the same families since the early then-Campbell County land grants of 1832, following our nation’s looting of the land from the native Creek and Cherokee Indian tribes. Steve and his daughter’s bucolic run was disturbed when they came upon bulldozers tearing down trees in the forest next door. When they asked why they were clearing the land, the workmen replied, “I guess we are putting houses here – that’s what usually happens.”

That was Steve’s Moment. Many in his situation would have shrugged their shoulders and planted a long row of leyland cypress. Others might have bought a different farm, further from Atlanta. Steve decided to stay and fight. His life changed, again, that instant.

Ironically, Steve had not started out in the restaurant industry, from which he later earned millions. Growing up in Colorado, Steve pursued his first love of architecture, attending classes at the University of Colorado and washing dishes in a restaurant. One day the owner ran into the kitchen and yelled, “Who here has a suit?” Steve’s mother had always told him to take a nice suit of clothes wherever he went, just in case, and this time it paid off. When Steve volunteered, the owner whisked him to the front of the restaurant to replace the previous maitre d’, whom he had just fired. Thus Steve took the first in a series of what he now calls “90-degree turns.” He enjoyed hosting the front of the restaurant, ushering guests to their tables (meeting many afterwards for drinks).

Leaving behind his architecture sketches, he entered the hospitality industry, landing a job with Stouffer’s Hotels after college. When the corporation planned to expand its hotel chain into Atlanta, Steve volunteered again, this time to leave its national director of sales and marketing position to open new properties in the emerging capital of the South. In 1973, he took another turn, opening the Pleasant Peasant restaurant in downtown Atlanta, growing it into a corporation of 34 restaurants in eight states before “retiring” in 1994.

In 1991, Steve, his wife Marie and three daughters had purchased a farmhouse in south Fulton County, spending weekends away from their Ansley Park home and fast-paced Midtown lifestyles. Having moved there permanently in 1994, they converted their horse barn two years later into a guest house and opened Serenbe Bed & Breakfast. Marie, whose mother owned Mary Mac’s Tearoom, oversaw the kitchen and menu at the Farmhouse and the Serenbe Chef Series Cooking classes. They were living the quiet life in the country – until that fateful jog.

That was his Moment, or at least his last 90-degree turn. If you’re keeping track, you’ll know Steve turned onto a path aligned with his first: architecture. He leapt into action, galvanizing his neighbors, organizing a non-profit and leading countless meetings over two years to preserve the lands around them with a master plan calling for 70% green space. Drawing together lessons learned from his native Colorado and the wine country valleys of California, Steve and his growing team ensured that development would not follow typical Atlanta tract neighborhoods. The 3,000 residents organized the 65,000 acres into a brand – the Chattahoochee Hill Country Alliance – helping Fulton County pass the region’s first land use plan developed by a grassroots initiative. It corralled development into small villages and hamlets, protecting reciprocal farmland through legal covenants.

With support from partners, including Rawson Haverty, garden designer Ryan Gainey and many others, Serenbe became the first example of the plan. Today, you can wander the streets and shops of the hamlet as it is carefully chiseled into the hills beneath the woods. If you’d rather visit virtually, you can follow the HGTV blog as the network documents its construction of the 2012 Green Home.

Serenbe has gathered international attention and attracted residents and visitors from around the world even though many Atlantans have never ventured south beyond the airport. In contrast to other parts of Atlanta – construction begins this season on half a dozen new energy efficient EarthCraft homes.

Sitting in the hamlet’s Blue Eyed Daisy Bakeshop across the street from his family’s home, Steve recalled the Moment that launched his new career as a developer. Today, with construction continuing just over the hill just beyond the organic farmers market, Steve is quick to point out that, even with the development rights that have green-lighted more homes for the Serenbe community, “we’ve only built out 10 percent of Serenbe’s master plan, disturbing only seven percent of our 1,000 acres.”

These days, Steve spices his conversation with the word “disturb” much like he stirred in the name “Alpharetta” with precise timing a decade ago. And though he has nearly perfected both his talking points and his vision amidst Chattahoochee Hills – now yet another new city within Fulton County – he is mindful that his hammer and chisel don’t disturb the peace and quiet he once found threatened by a few bulldozers 12 years ago.

Next week in Moments: Mayor Evelyn-Wynn Dixon of Riverdale, GA.