Fifty years after President Lyndon Baines Johnson signed the Civil Rights Act on July 2, 1964, Atlanta leaders of today and yesterday spoke of the journey that lies ahead.

The leaders spoke at a half-day symposium on Friday that was held at the King Center titled: “The Civil Rights Act @ 50: Looking Back; Moving Forward 1964 – 2014.” 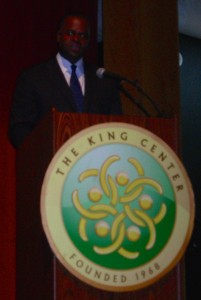 For Atlanta Mayor Kasim Reed, it means that his recently-born daughter will have the opportunity to be the CEO of a corporation when she grows up.

For Bernice King, the youngest child of Martin Luther King Jr. and Coretta Scott King, the challenge is to recruit young people to join the modern day struggles for equal opportunity and civil rights.

She repeated one of her favorite quotes from her mother: “Struggle is a never-ending process. Freedom is never really won.” She went on to say: “You earn it and win it in every generation. We must guard and protect our freedoms in every generation.”

Then King challenged people who have succeeded as a result of the Civil Rights Act — people who live in wealthy communities, work in executive suites, drive expensive automobiles — people who fell asleep during the ongoing struggle. 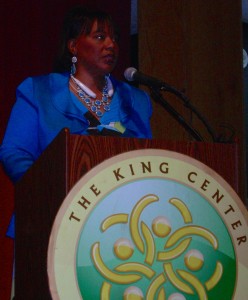 But King said that while they have been asleep, poverty rates have climbed back up to levels that existed before there was the “War on Poverty,” affirmative action goals have been diluted, and there has been a re-segregation in our schools, neighborhoods and even some retail establishments.

“While we look forward to the next 50 years, we must remain awake and diligent,” she said. “There’s a fierce urgency of now.”

Two legendary leaders of the civil rights movement — former Atlanta Mayor Andrew Young and Rev. C.T. Vivian — then reflected on the changes of the past 50 years, prompted by long-time WSB-TV anchor Monica Pearson. 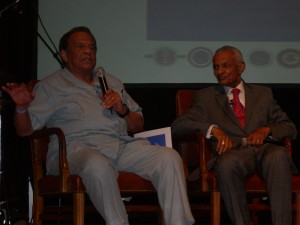 “Integrate the money,” Young told the audience, which included a large number of students. “You’ve got to understand the economy.” Young then gave a shout-out to Operation HOPE’s John Hope Bryant, and his book: “How the Poor Can Save Capitalism.”

Vivian, on the other hand, expressed concerned over the 40 percent drop-out rate among African-American males in the state’s public schools. As a result, the largest educational system in Georgia today is its prison system.

Several leaders commented on how there seems to be a disconnect between the generations.

Pearson observed how the audience sang along to the civil rights hymn “We Shall Overcome.” 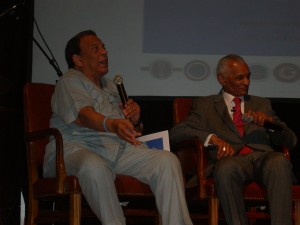 The older generation, people who had lived through the civil rights movement, stood with interlocking arms crossed over their bodies which gently swayed back-and-forth to the song. Younger people were not quite sure whether to hold the hand of the person standing next to them, which Pearson said meant they were missing the important feeling that come with human touch.

The latter part of the day focused on the government side of the equation – how the Civil Rights Act is faring 50 years later.

From her office in Washington, D.C., Berrien said she goes by a portrait of Martin Luther King Jr. and a photo of President Johnson signing the Civil Rights Act. 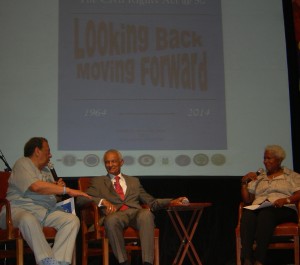 She then decided to highlight one person: the late Donald Hollowell, who was King’s attorney as well as the lawyer who represented the students who integrated the University of Georgia.

“He lived and worked in a time of cradle to grave segregation,” Berrien said. “Donald Hollowell became one of the great lawyers of the civil rights movement. Soon after the EEOC opened its doors in 1965, LBJ had Dr. Hollowell open the first branch office of EEOC in Atlanta. Before Hollowell, no African-American had ever n a regional director of any federal government agency.”

Several regional directors of federal agencies were on Friday’s program, and Berrien said many of them owed their positions to the successes that had occurred as a result of the Civil Rights Act and because of the role that Atlanta leaders had played in the 1960s.

But she also reminded the audience that the struggle is not over.

“We have not yet accomplished and ended unlawful employment

in the workplace,” Berrien said. “We receive 90,000 claims of employment discrimination each year.”

Previous Article
Fort McPherson: No talk yet of whether HUD’s existing approval would allow for Tyler Perry’s studio
Next Article
Savannah port to expand trade to imports of South American produce