UrVa the Archer is one of the puppets on display in the new "Dark Crystal: Age of Resistance" exhibit at the Center for Puppetry Arts. Photo: John Ruch

The elaborate and stunningly lifelike puppets that brought the fantasy world of “The Dark Crystal” to life once again for a recent Netflix series are showcased in a new special exhibit at Atlanta’s Center for Puppetry Arts. 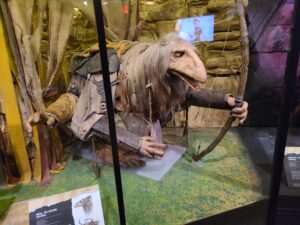 UrVa the Archer is one of the puppets on display in the new “Dark Crystal: Age of Resistance” exhibit at the Center for Puppetry Arts. Photo: John Ruch

Full of weird and colorful characters, “Masterpiece of Puppetry: Jim Henson’s The Dark Crystal: Age of Resistance” shows how the ancient art was updated with modern technology for the critically acclaimed series.

The exhibit opens June 18 and is scheduled to run through Halloween.

The original “Dark Crystal” was a 1982 film created and co-directed by Jim Henson, the puppeteer genius who created the Muppets.

The work of Henson, who died in 1990, is already the focus of a major permanent exhibit in the center’s museum, including Muppets and puppets from the original “Dark Crystal” film.

“Age of Resistance” was a 2019 prequel series created by the Jim Henson Company. Its puppets were donated to the center late last year. 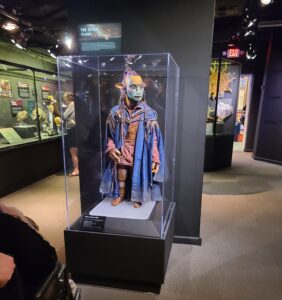 One of the puppets showcased in the new “Dark Crystal” exhibit. Photo: John Ruch

The series was part of something of a resurgence of puppetry in the now fully computer-animated genres of fantasy and sci-fi. The breakout star of Disney’s blockbuster series “The Mandalorian” is the so-called Baby Yoda, an alien creature primarily portrayed by a puppet. That character is a nod to Yoda of the “Star Wars” films, who was performed by puppeteer Frank Oz, a longtime partner of Henson and co-director of the original “Dark Crystal.”

Besides the new special exhibit, the museum also has a new director: Sarah Dylla, who most recently worked at the Atlanta History Center, where she curated the recent revamp of the exhibit about the 1996 Summer Olympics.

At a June 17 preview event, Dylla told the crowd that the exhibit’s behind-the-scenes approach is intended to engage people who aren’t familiar with the cult-hit “Dark Crystal” world as well as hardcore fans.

Part is explaining the scope of a series that took more than 170 puppets and over 80 puppeteers to create. And part is opening up some of the goblin-like or elfin puppets to show their intricate mechanisms.

The “Dark Crystal” exhibit shows how one puppet went from concept sketch to construction to the screen. Photos: Netflix/Jim Henson Company

“It really shows off what went into this production,” Dylla said.

The Center for Puppetry Arts is located at 1404 Spring St. in Midtown. For more information, see puppet.org.