The Atlanta-based Points of Light Institute has launched “America’s Sunday Supper” — to be held throughout the nation on the Sunday before the King birthday holiday — as a way to exchange meaningful dialogue among a diverse group of citizens.

Michelle Nunn, CEO of Points of Light, invited a strategic group of caring Atlantans to her Inman Park home to join in the conversation of our beloved community — from the current state of race relations to how to tap into the energy of the Occupy Atlanta/Wall Street movements that has helped change the tone of the presidential election. 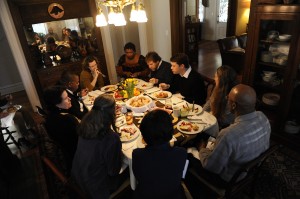 Our Sunday Supper — sitting around Michelle Nunn's and Ron Martin's dining room table discussion the issues of the day (Special: Points of Light)

Nunn started the conversation by telling us the idea behind the Sunday Suppers — “an opportunity for people of diverse backgrounds to come together to share a meal, discuss the challenges our nation faces and take action.”

It is another dimension of the King holiday — which in the mid-1990s became a day of community service and volunteerism — the core mission of Points of Light and its predecessor organization — Hands On Network.

Points of Light is hoping that the idea of the Sunday Supper will catch on and become a national tradition — a way to connect or reconnect with people who can help us find meaning and direction to our community’s issues and solutions.

The hope is that individuals, nonprofits, faith communities, businesses and other organizations will plan Sunday Suppers as a way of building on King’s legacy of transforming neighborhoods through service and civic dialogue.

Around our table, the conversation took several twists and turns — the redistricting at the state capitol that is leading to a decreasing number of white Democrats at the legislature; the controversial rezoning proposals of the school districts of the Atlanta Public Schools; the need to gather people to work on specific projects rather than just talking; the need to have ongoing community gatherings where people can comfortably discuss issues before a crisis evolves; how to capitalize on Atlanta’s unique position as King’s birthplace and a city that has had a rich history of resolving conflict and promoting human and civil rights.

Several optimistic messages came through — the partnership that Abrams has development with Gov. Nathan Deal; the willingness of U.S. Sen. Saxby Chambliss (R-Georgia) to work in a bi-partisan way to reduce the nation’s debt; the ability of the younger generation to change the conversation and to take a fresh look at issues that have divided their parents and grandparents; how far we have come in so little time (Jason Carter spoke of how his ancestors actually owned slaves and Michelle Nunn disclosed that her grandfather, who was a Southern gentleman, had been a segregationist).

And then her husband, Martin, said that despite the diversity among us at the Sunday Supper, we were all of similar political leanings — and that the conversation could be enhanced with the presence of conservative Republicans also sitting at the table.

The power of the Sunday Suppers is that there are endless opportunities for one-on-one exchanges with an array of individuals.

Given the role that Atlanta has played in welcoming tolerance and resolving conflicts, we should seek to become the epicenter for Sunday Suppers. It is an evolving tradition that we can nurture for generations to come.

Note to readers: In 1995, I wrote a column for the Atlanta Journal-Constitution about how the King holiday could be a time when people of diverse backgrounds could gather around a common table to build bridges of understanding. Now, 17 years later, it’s amazing that such an idea is taking hold. Here is the story from 1995.

Columnist Maria Saporta writes: Reports last year said the holiday is widely perceived as a “black” holiday. What a shame. King’s philosophy of peaceful race relations transcends black and white. While overt segregation is virtually gone from our society, a gulf between the races still exists. It is too rare that people of different races socialize. Until we feel comfortable interacting with each other on a personal level, it will be difficult to eliminate racism. Perhaps a new tradition can begin on the King holiday whereby people of different races, cultures and religion spend the day together.

Reports last year said the holiday is widely perceived as a “black” holiday. What a shame.

In his 1963 “I Have a Dream” speech, King said: “I have a dream that one day on the red hills of Georgia, sons of former slaves and sons of former slave owners will be able to sit down together at the table of brotherhood. . . . I have a dream that my four little children will one day live in a nation where they will not be judged by the color of their skin but by the content of their character.”

Unfortunately, as we prepare to celebrate the King holiday Monday, the civil rights leader’s healing spirit seems to have faded. An example is the fight between the Martin Luther King Jr. Center for Nonviolent Social Change and the National Park Service.

While overt segregation is virtually gone from our society, a gulf between the races still exists. It is too rare that people of different races socialize. Until we feel comfortable interacting with each other on a personal level, it will be difficult to eliminate racism.

Wouldn’t it be wonderful if here, in King’s hometown, we could begin a new national tradition for celebrating the King holiday? It could be a day to socialize with people who are different than we are.

Just as Thanksgiving is a day to give thanks for all that we have while dining on turkey and dressing, the King holiday could become a day when we share a meal or time with people who could help us bridge the gap of misunderstanding.

Blacks could invite whites into their homes, and vice versa. An American family could invite a Japanese family out for dinner. Christians, Jews and Muslims could visit acquaintances of a different religion.

The possibilities are endless. The tradition could transcend the United States. In every corner of the world, there is a need for humans to make one-on-one friendships with people who are different than they are.

Each year, the tradition could spread to the point where people who didn’t participate would feel left out.

The idea for creating this King holiday tradition came to me last year in a conversation with Atlanta Life Insurance President Don M. Royster Sr. We talked about how, despite integration in the workplace, in schools and other public arenas, blacks and whites tend to keep among themselves during their private time.

I thought of my own life. When I was in elementary and high school, I was fortunate to make many black friends, including King’s eldest daughter, Yolanda King. We spent nights in each other’s homes, feeling that we were actualizing her father’s dream.

But as I have gotten older, I have tended to spend my personal time with people who are a lot like me.

The King holiday could give us a reason to celebrate our differences and revive King’s spirit in our daily lives.