Although he was not physically present, Ted Turner was a guest of honor at Monday’s 20th birthday celebration for the Cartoon Network.

Turner, however, did appear on video, saying he was sorry he couldn’t be with the hundreds of employees who gathered in a large studio on the Turner campus off 10th Street. When he said he couldn’t be there, there was a disappointed “ahhh” from the crowd.

Turner reminded the Cartoon Network employees and executives that they were standing in “the very spot where we launched the network 20 years ago.” And then he asked everyone to have a piece of cake for him.

Stuart Snyder, president and CEO of Cartoon Network and Adult Swim, said Turner “and a group of mavericks” launched Cartoon Network 20 years ago, and it has been “whimsical” ever since.

“You are truly a special group of people,” Snyder told his Cartoon Network family. “I especially thank you for not growing up. We may be 20 years old, but we love acting and thinking like 11-year-olds.” 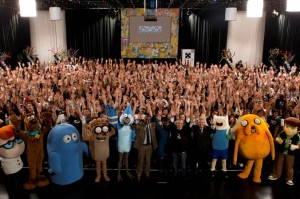 When Phil Kent, president and CEO of Turner Broadcasting — the parent company of Cartoon Network, came to the podium, the first person he thanked was also Ted Turner — “a truly remarkable entrepreneur.” Without him, there would not have been a Cartoon Network, he said. “Cartoon Network was a great idea and it was an audacious idea.”

It was only one of many cable programming ideas that Turner had over the years. After the program, Kent said that “in hindsight, they were very simple ideas, but he thought of them first.”

Atlanta Mayor Kasim Reed also had gracious words to say about the founder of Cartoon Network.

“I think Ted is certainly in this room today, and he should be,” Reed said. “Ted Turner is an iconic Atlanta entrepreneur who empowered dreams, and he backed up his ideas. This story is just incredible.”

Snyder said that Turner, who became estranged from the Turner Broadcasting’s parent company — Time Warner — several years ago, said that the founder is ever present at the network.

“We live Ted’s spirit every single day,” Snyder said. “His spirit is with us in how we approach what we do — being a maverick and thinking about the future.”

Yes Turner was the first to come up with the idea for a 24-hour news channel and a 24-hour cartoon channel as well as so many other networks.

“He thought of them first,” Snyder said. “But he also had the vision to think about where they could go.”

By the way, Turner will be at a special private event on Thursday evening at the Georgia Aquarium to benefit — GCAPP — a nonprofit organization started by his ex-wife, Jane Fonda to prevent teenage pregnancy.

In fact, Fonda will present Turner with the first-ever “Big Thinker Award.” And the program will feature Pat Mitchell, a news media legend, hosting a conversation between Turner and Fonda, who remain close friends.

Previous Article
Piedmont Sets a High Standard with the New Newnan Hospital
Next Article
Kevin Rathbun’s Moment was tearful one, stirred into a lifelong family recipe in the restaurant business