Ted Turner: ‘I wouldn’t have moved the Braves to Cobb County’

Ted Turner, the former owner of the Atlanta Braves, finally let the world know Wednesday that he would not have moved the baseball team to Cobb County.

Since the deal was announced last November, Turner has been uncharacteristically reserved when asked to comment about the Atlanta Braves plans to leave Turner Field in downtown Atlanta in favor of building a new $672 million stadium in Cobb County. The plan is for the Atlanta Braves to play in a new Cobb stadium in time for the 2017 baseball season.

But during a “fireside chat” at the Technology Association of Georgia’s 2014 Georgia Technology Summit (gathering coincidentally at the Cobb Galleria Centre), Turner let his feelings be known for the first time.

Tino Mantella, TAG’s president and CEO, was asking Turner about his thoughts of the current strained relationship between the United States and Russia. 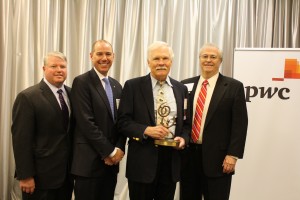 That led Turner to remember a similar time when the United States withdrew from participating in the 1980 Summer Olympic Games in Moscow. That’s when Turner started his own peace-making sporting event — the Goodwill Games.

After the fireside chat, in a one-on-one brief interview, Turner elaborated on his thoughts about the Braves planned move to Cobb, which is made a point of saying was not in Atlanta.

Asked why he was against the move, Turner said: “It’s tradition. I never would have done it. They tried to get me to move the Hawks and I didn’t do it.”

Turner’s ownership and control of the Atlanta Braves was impacted when Turner Broadcasting System merged with New York-based Time Warner, which then merged with AOL. It was then when Turner said he got “canned” from his job at the company he had founded.

But many of his former colleagues and associates are still with the Atlanta Braves and its new owner, Liberty Media. Did Turner express his feelings to the current Braves executives?

“Nobody asked me,” Turner said.

Then as he was walking away from the Cobb Galleria ballroom, Turner observed: “It looks like getting into the Atlanta stadium is going to be a lot easier than getting to a stadium here.”

The Braves currently play in a facility that was originally built as the Olympic stadium when Atlanta hosted the Summer Games in 1996. The plan from the beginning had been to convert the Olympic stadium into a new stadium for the Atlanta Braves after the Games were over.

That stadium has since been called Turner Field — in recognition of either Ted Turner or Turner Broadcasting or both.

Knowing that his namesake stadium likely will be torn down when the new Cobb stadium is built, Turner was asked whether he felt sentimental about that landmark being lost from the city’s skyline.

“The one in Cobb is not going to be named after me,” Turner said. “That’s probably why they want to do this. They can make a lot of money selling the naming rights.”

Turner, who has become a philanthropist devoted to saving the earth, also commented that it doesn’t make much environmental sense to tear down a perfectly good stadium that is less than 20 years old to build a new stadium in an area that is not as well served by transit.

Turner’s final words as he parted ways was: “I like the old stadium.”