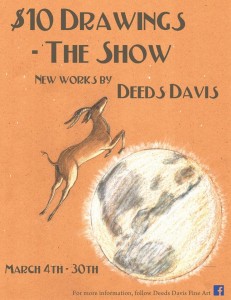 Illustrator Deeds Davis’s $10 art show takes place throughout most of March at the Java Monkey coffee shop in Decatur.

As technology makes creative work move faster, the careers of Deeds Davis and other illustrators have slowed way down. In a world of stock photography and digital design, fewer people seek intricate, original drawings by a human.

Davis, whose art has always had a proletarian feel to it, found a small sweet spot in the tight art market and has some profit to show for it.

Last week, the Dallas, Texas, native launched a month-long exhibit of her latest sketches at the Java Monkey coffee shop in Decatur, where she works as a cook. Within the show’s first 90 minutes, all but three of her 65 works on display had been sold.

The title of the show, which runs through March 30, is just as pared down as Davis’ approach: “$10 Drawings – The Show” is a testament to one artist’s ability to adapt during tough economic times.

She said she discovered the virtue of making and selling $10 art last November, when her migraine headaches had become so bad that she needed an MRI. The procedure required her to come up with cash to cover a hefty deductible. Davis put together a show and the pictures were a hit. “I sold up to 70 pictures,” Davis said.

Davis said she did okay in illustration for about three years. She drew illustrations for childrens books, received a commission to paint three  watercolor pieces of the United Arab Emirates palace. However, she ultimately hung up her “illustration badge because it had become feast or famine.”

Is ten bucks too cheap? Davis doesn’t think so. The price point fulfills her mission to connect what she does to people who can afford it. Sketchers gotta sketch.

“The economy hasn’t turned around for the middle class on down, so I kind of feel like as an artist like I have a responsibility to create art and the other side of it having an audience that can afford it,” she said. “That’s really kind of the driving force.”

Few jobs for the next Sendak 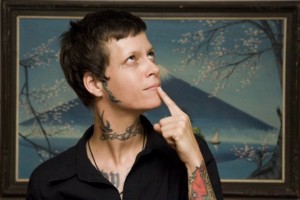 The number of fine artists far outnumbers the available jobs, reports the Bureau of Labor Statistics. It projects little growth for illustrators, craft and fine artists over the next decade. Local interest, like Davis tapped, is one saving grace.

“During good economic times, more people and businesses are interested in buying artwork; during economic downturns, they generally buy less,” the feds say in their Employment Projections program. “Although there is always a demand for art by collectors and museums, the employment of artists can be affected by the level of charitable giving to the arts, which has been decreasing somewhat in recent years.

“In addition, job growth for craft artists may be limited by the sale of inexpensive, mass-produced items designed to look like handmade American crafts. However, continued interest in locally made products and craft goods sold online will likely offset some of these employment losses.” 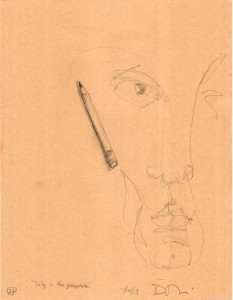 “Living in the Graphite,” by Deeds Davis.

This is a far cry from earlier eras, like the 1950s when Norman Rockwell was a national treasure. A century ago, when Maxfield Parish and Frederic Remington were feted as celebrities. Their status fit with their art. The word “illustrate” comes from the Latin “to shed light on,” and their drawings thrust these artists into a great public spotlight.

Back to Java Monkey

“Illustrator jobs are now pretty limited in this town,” Davis said. “Most of my illustrator friends have all left the city for California, New York or Chicago. Unless you can get on with a major outfit like an animation company you just don’t get to illustrate. It’s just an overly saturated market.”

Clients are less willing to spend good money for quality work, and there are fewer deeper-pocketed individual customers. Davis said it was possible to make it as a freelancer, but, for her, the business ran too hot and cold.

The drawings are sketched on brown craft paper and slipped into sheet protectors. Her depictions, sometimes whimsical, sometimes surreal, portray singular images such as a teacup carrying two sailors or a large eye behind an infant’s toy.

Some of Davis’s pictures include only the slightest flashes of color. Some appear as if they could be covers to children’s books. Others would seem to belong in frames.

“I’m at a point where I’m able to successfully to mash-up fine art and illustration and people are really responding to it,” she said. 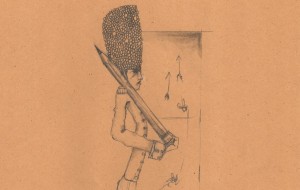 Sketch of a royal guard armed with a pencil.

Drawing came to Davis naturally. In 3rd grade, she started putting Jimmy Durante’s nose and hat on cartoon pigs. She can’t explain the obsession with Durante or her fixation with Sergei Eisenstein’s “Battleship Potemkin.” Davis  saw the film as a young child and was so taken by it that she would re-enact the film’s famous runaway baby carriage scene by letting her own doll carriage tumble down the stairs at home.

She credited her mother for nurturing her artistic talent and for sending her to public school arts magnet programs in Texas. Davis graduated from the Portfolio Center in Atlanta in 2011.

Davis recalled learning, from a book she still owns, how to draw elephants using just seven lines. It was good training in the resourcefulness on display in “$10 Drawings – the Show.”

Previous Article
Tax Court Says One Tax-Free Rollover per Year Means Just That
Next Article
The boys of Currahee: they stood alone (Part 1)