A war of words has escalated between opposing sides of a federal lawsuit over Tyler Perry’s plans to build a major movie studio complex on 330 acres of what used to be Fort McPherson.

As Atlanta Mayor Kasim Reed and Tyler Perry announced on Friday, Aug. 8 that they had reached an agreement for the film-maker to buy 330 acres for about $30 million, the mayor reacted aggressively when he was asked about the federal legal proceedings objecting to the deal. 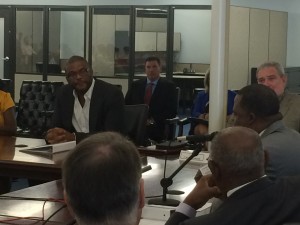 For the past three years, Meachum has been working on plans to develop a movie studio and entertainment complex on up to 85 acres of land on Fort McPherson, which encompasses about 480 acres of land between downtown and Hartsfield-Jackson International Airport.

According to the UE Studios lawsuit, in early 2014, officials from the McPherson Implementing Local Redevelopment Authority (MILRA) told UE Studios that they could not negotiate with UE Studios or any other prospective buyers until they owned the title of the property from the Army.

So when Reed announced that he had reached a tentative agreement with Tyler Perry to sell most of the Fort’s property to the nationally-known film-maker, UE Studios filed suit questioning the process of the transaction as well as the way it had been treated.

Reed, however, was publicly dismissive and combative when talking about the litigation, saying he could talk about it because he had not been named in the federal lawsuit. 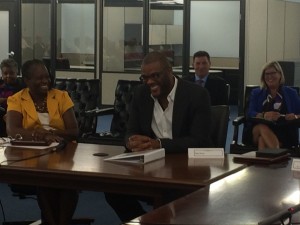 “For this individual to bring this kind of claim, it’s silly, it’s baseless, it’s garbage, and he is going to lose,” Reed said, implying that Meacham was filing the lawsuit as a way to make money.

UES, however, in an exclusive release to SaportaReport, issued a scathing response to the mayor on Sunday. Here is the full, unedited response from UE Studios.

To clarify and present the facts and to address the seemingly intentional misrepresentation of our actions and intentions, UE Studios releases the following statement:

UE Studios believes that the development of film studios on the campus of Fort McPherson is a great idea.

In fact, we are so committed to the idea that, from 2011 through 2013, we began discussions with MILRA; invested in a site and vibration studies; developed a business plan, renderings and projections; and initiated and held meetings that included MILRA, Invest Atlanta, the selected master developer for Fort McPherson, and Paramount Pictures.

Over the course of these discussions, MILRA was both enthusiastic and helpful in working with us to realize this project. It is through those discussions with MILRA that we were told that the potential studio could be built on 85 acres of the Fort McPherson site in order to accommodate the other elements of the master plan.

The UE Studios plan that was presented to MILRA included a studio, performing arts theater, a film school and outreach and engagement with the local community.

In December 2013, to further demonstrate our commitment to developing a film studio as the anchor of an entertainment campus, UE Studios made an offer to begin negotiations to buy 80 acres of land on the site that MILRA had determined was best suited and available for UE Studios. MILRA did not respond until February 2014. 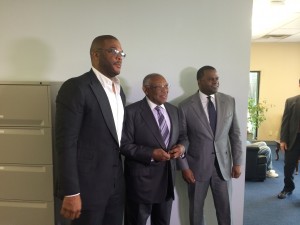 In February 2014, MILRA executive Jack Sprott sent UE Studios a letter stating unequivocally that MILRA was prohibited from negotiating with any person or entity until the land had been conveyed to MILRA from the U.S. Army. That statement would soon be proven untrue, deliberately deceptive or grossly uninformed by the people charged with making sure that the process was open and fair.

In June 2014, UE Studios discovered through a public statement made by Mayor Kasim Reed that he intended to sell the land to Tyler Perry. The day after the mayor’s statement, UE Studios sent an email to the mayor requesting a meeting to discuss his desire for a film studio at Fort McPherson; the UE Studios project; and our view that there is room for more than one studio project. The mayor did not respond to our request until three weeks later – the day after UE Studios filed its lawsuit.

UE Studios’ lawsuit was filed to address wrongs that became evident as the process of developing these public lands was turned into a secretive, backroom deal that excluded any other citizens, entrepreneurs, proposals, input or consideration for the best deal available. Evidence of this flawed process is the statement by MILRA that its board has agreed to sell 330 acres to Tyler Perry at less than market value.

As citizens of the United States, Georgia and Atlanta, we have exercised our fundamental right to seek redress through the legal system. We find it unacceptable that valuable public assets are directed to those who are selected by public officials without an open, transparent, fair and legal process. Such actions are tantamount to those of disgraced Detroit Mayor Kwame Kilpatrick, not the behavior we have come to expect from the best of our elected officials in Atlanta.

We say, let the facts speak. 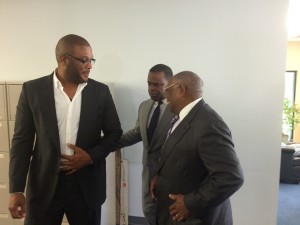 Although Perry did not talk about the lawsuit during Friday’s MILRA board meeting, he did talk about his vision for Fort McPherson.

Most importantly, Perry reassured the community that he would not be replacing a fort with a fort, and that he had been listening to the community’s concerns.

Tyler Perry envisions having as many as 16 movie, television, video and sound studios on the property – almost all located toward the center of the property.

But Perry did acknowledge that the property “won’t be open everyday for everybody.”

Instead, the studios will be available for tours, and Perry also hopes to provide training for neighborhood residents who are interested in entering the movie business.

Perry then reminded members of the MILRA committee how he had grown up in an impoverished community in New Orleans, and viewed his move to Atlanta as coming to the “promised land.” Perry said his plans for Fort McPherson is not just about film, it’s about inspiring young people and providing a “beacon” of opportunity for them to lift up their lives.

“It would be foolish for me to come to my own people and sit among them and shut them out,” Perry said, “when it was the people, my people, who helped me get in this position.”

Previous Article
Ebola: A Word That Strikes Fear
Next Article
At 78, my healthy mom’s guide to dying well