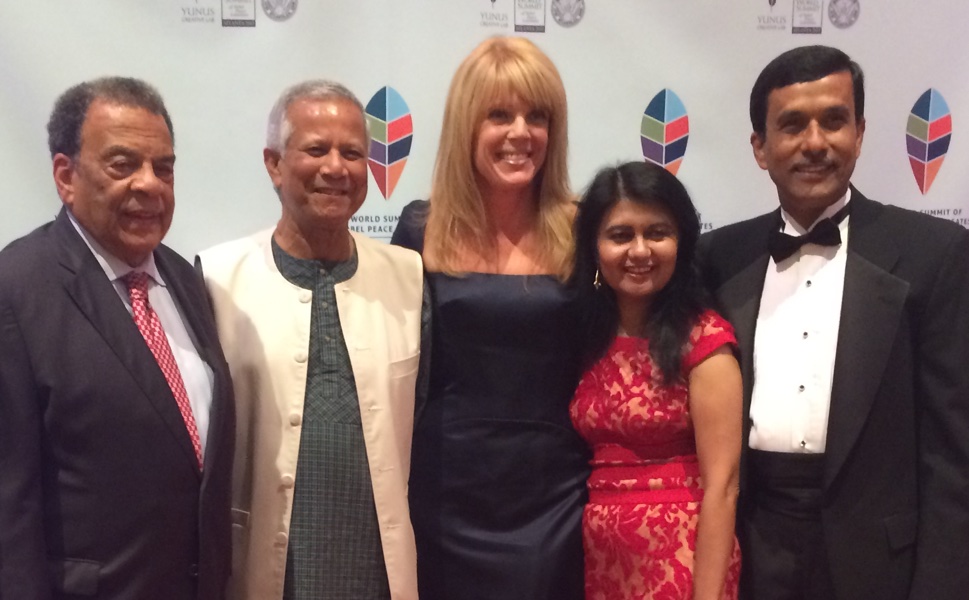 The 2015 Nobel Peace Laureate Summit in Atlanta has taken another bizarre (and confusing) twist and turn.

And it is still unclear how this latest development will impact whether Atlanta will host the 2015 Summit of Nobel Peace Laureates and who would be putting on the event from November 15 to 19.

Here is what happened.

Professor Muhammad Yunus, the recipient of the 2006 Nobel Peace Prize – and the Laureate who has been the biggest champion of bringing the 2015 Summit to Atlanta, sent an email on Thursday saying he was resigning from the board of Yunus Creative Lab. 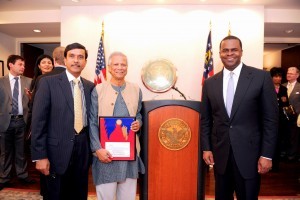 At a ceremony at City Hall nearly three years ago, Mohammad Bhuiyan stands next to Muhammad Yunus as he receives special recognition from Atlanta Mayor Kasim Reed (Special: City of Atlanta)

Yunus Creative Lab, led by CEO Mohammad Bhuiyan and COO Shamima Amin, has been the entity putting on the Summit on behalf of Professor Yunus.

But there have been personality conflicts and issues of governance between Bhuiyan and Atlanta civic leaders, including Atlanta Mayor Kasim Reed.

After months of negotiations between Bhuiyan and Reed over issues of financial oversight, governance and event planning, the mayor wrote a letter on March 19 declaring that the City of Atlanta was withdrawing its support for the Summit because of an inability to reach a consensus with Bhuiyan.

A couple of weeks later, the mayor clarified his position and said that the City of Atlanta would love to host the Summit, but only on one condition – that Bhuiyan is not leading the effort.

As for Yunus, up until now, it has appeared as though he has been Bhuiyan’s most ardent defender.

A couple of years ago, Yunus has said that he considered Atlanta to be his second home after Bangladesh. And he had hoped Atlanta would have become a hub for his social business enterprise initiatives. That is the message he has been spreading around the world ever since he won the Nobel Peace Prize nine years ago.

In fact, Yunus was the founder and chairman of Yunus Creative Lab until he submitted his resignation in a letter dated April 7 – addressed to Ratkim Sen, secretary of the organization.

Here is the entire email:

I am sending my letter of resignation. Please present my resignation letter to the board.

I am shocked to see the news story carried by PRNewswire on April 7, 2015, published in some newspapers in Atlanta. It reports that I “have sent confirmation letter to Nobel Secretariat (that) the World Summit for Nobel Laureates will be held as scheduled in November”. This is not true. I have been rather worried about the situation developing in Atlanta, and my being quoted, frequently, that I am supporting the initiative of Yunus Creative Lab (YCL) to hold the Summit without the support of the Secretariat and the City. This  is a false impression given by YCL. I am very concerned that YCL is projecting my views in the press which are completely opposite to my actual position on the issue. Not only am I unable to influence the position taken by the management of YCL, but to my utter surprise, I am being presented as if I am in full support of the YCL initiative.

Under these circumstances I see no other option but to resign from the position of Chairman and member of Yunus Creative Lab board of directors with immediate effect and disassociate myself from YCL in all matters.

Please release this resignation letter to the press so that all sides on the Summit issue know clearly that I am no longer associated with Yunus Creative Lab, and I am in no way responsible for its actions.

I strongly believe that Atlanta is a great  city to host a Nobel Laureate Summit and establish itself as the City of Peace. That’s why I worked to bring the Summit to Atlanta.  I fervently hope that the  leaders of Atlanta will find a peaceful and happy solution to the problem and find a way to hold the Summit in Atlanta in November.

The email clearly signals an end to the relationship between Yunus and Bhuiyan, which would leave open the door for Mayor Reed and Yunus to join forces on hosting a 2015 Summit in Atlanta.

A sticky issue, however, is that Bhuiyan has collected about $3 million from local corporations and individuals interested in supporting the Summit. The funding has come from Coca-Cola,, UPS among others, and it has been collected through Yunus Creative Lab. 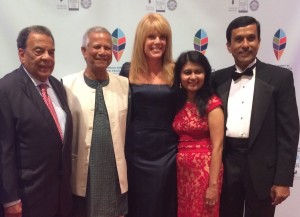 That actually had been one of the divisive issues between the mayor and Bhuiyan. Reed had asked Bhuiyan to transfer the money raised for the Summit to an account that would be overseen by the Community Foundation of Greater Atlanta. But Bhuiyan had resisted turning the money over – saying it was being kept in a separate account and was transparent to all.

So now the question is whether Professor Yunus would be able to convince Bhuiyan to graciously turn over those funds so Atlanta could continue with its plans to host a Summit.

In the meantime, the Permanent Secretariat of the World Summit of Nobel Peace Laureates, which awarded the 2015 Summit to Atlanta last year, will be holding a meeting in Rome, Italy on May 2nd and 3rd to decide how to proceed.

Asked by email Thursday night why Professor Yunus resigned from Yunus Creative Lab, Bhuiyan answered that “there are a lot of frustrations over the recent controversy,” and that “there has been so much negative publicity around the Summit.”

On Thursday morning, Yunus Creative Lab came out with the following statement from its board:

There are a lot of misunderstandings and frustrations over the recent controversy surrounding the Peace Laureates Summit in Atlanta.  There has been so much negative publicity around the Atlanta Nobel Peace Laureates summit that there is every reason for Professor Yunus to feel uncomfortable and take himself out of this muddy picture. He not only had to deal with Atlanta press, but more importantly the negative press in Bangladesh. We respect his decision. It must be painful for him to resign as chairman of something that bears his name and was intended to do so much good.
We are happy that Prof. Yunus is still hoping for Atlanta leaders to will find a peaceful and happy solution to the problem and find a way to hold the Summit in Atlanta in November. Sadly, a peace summit has been anything but peaceful.  We are also hopeful that all the hard work of the past two years can still be directed to result in something positive and fruitful.  This may be evidence as to why peace isn’t very easy to achieve.

Neither Mayor Reed nor key members of his staff responded to an email Thursday night asking for a response to Yunus’ letter that he was resigning from the board of Yunus Creative Lab.

Another key person in the mix is former President Jimmy Carter, recipient of the 2002 Nobel Peace Prize. Carter, along with Yunus, had been listed as the Nobel Peace Prize Laureates co-hosts for the 2015 Summit.

A spokeswoman for President Carter was asked about his position on the Nobel Peace Summit in a couple of emails – each several questions.

In response to the second email asking for specific answers, she responded: “My previous response stands on behalf of President Carter and The Carter Center.”

Even with all the turmoil surrounding the Atlanta Summit, observers have said that it is farther along with its preparation and fund-raising than other Summits have been at this stage of the process.

The question going forward, however, will be whether the latest twists and turns will put the 2015 Summit back on a straight path or whether the situation has become even more tangled up in knots.