The Atlanta BeltLine Vision is Advancing in Momentous Ways

As our partners at Atlanta BeltLine, Inc. (ABI) have captured in this year-end video, significant accomplishments were made in 2021 to move the full Atlanta BeltLine vision forward, including delivery of three new trail segments, the opening of Westside Park, the launch of the Legacy Resident Retention Program, substantial affordable housing production, and more. Like all BeltLine progress, these milestones could not be accomplished without robust public, private, non-profit, and community partnerships. 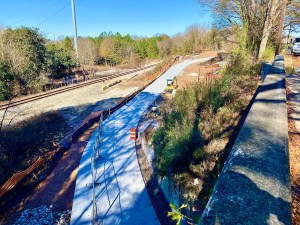 The most important milestone, though, has been the commitment by Atlanta’s leaders and the community to complete the full 22-mile BeltLine trail corridor by 2030. Before 2021, funding for completion of the BeltLine’s backbone had been uncertain due to early litigation, recessions, the COVID-19 pandemic, and other funding challenges. Catalyzed by passage of the Special Service District (SSD) in March, more than $300 million of the $350 million needed to finish the trail corridor has been secured from local, federal, and philanthropic sources, and the remaining funds are being aggressively pursued.

With every new section of the BeltLine improving connectivity, quality of life, and Atlanta’s economic competitiveness, the importance of locking in these funds cannot be overstated. A few key things made this possible, and they provide learnings that can be helpful for other components of the BeltLine and other city projects.

Outcomes for people. While tempting to focus on the 15 miles of trail corridor that will be completed, the BeltLine and other infrastructure projects are ultimately investments to improve people’s lives. As Atlanta charted its course for an equitable economic recovery from the COVID-induced recession, our leaders recognized the BeltLine could create a stronger future for our residents. In addition to the clear health and wellness benefits, completion of the corridor will spur:

Urgency. It has been difficult at times to elevate the BeltLine amid other competing civic priorities, as people tend to think there will always be enough time to finish a multi-decade project. That has changed.

Public and private leadership. Many leaders across multiple sectors have come together to co-invest in this plan.

There is still much work to be done. Collaborative leadership from Mayor Andre Dickens and the new Atlanta City Council will be critical as ABI moves aggressively to complete the corridor in partnership with the PATH Foundation and others.

At the Atlanta BeltLine Partnership, we continue to connect with new and longtime BeltLine donors to raise the remaining philanthropic funding needed to complete the BeltLine trail corridor and other BeltLine projects. For these donors, the Atlanta BeltLine is recognized as a proven investment that drives jobs, economic impact, and community well-being. Now is the time to be part of bringing the BeltLine vision to life for our city.

Want to be part of Advancing the Vision? Contact Rob at rob@atlblp.org or call 404-446-4404 to find out more and how you can help.