Walking along Auburn Avenue during the Sweet Auburn Festival, we stopped by the crypts of Martin Luther King Jr. and Coretta Scott King — one of the most sacred spots in Atlanta.

How could that be? Wasn’t an eternal flame supposed to burn forever?

Underneath the flame, there was a plaque saying that the eternal flame had recently been refurbished by the Atlanta Gas Light Co., the keeper of our city’s Shining Light Awards.

So sitting there, I sent an email to John Somerhalder, CEO of AGL Resources, the parent company of Atlanta Gas Light. I thought he would want to know that the eternal flame was not lit. 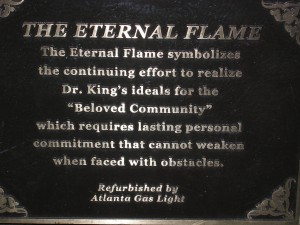 Somerhalder sent me back an email that evening saying he was out of town, but that he would look into it.

All sorts of thoughts entered my twisted head. What if the Martin Luther King Jr. Center for Social Change not been able to pay its gas bill? Or was the flame under the purview of the National Park Service? And if so, did federal budget cuts blow out the eternal flame?

Then I researched the internet to see if there had been any reports of the flame being out.

In the frequently-asked-questions page on Martin Luther King Jr. National Historic Site, one of the questions was: “Why is the eternal flame not lit?”

The answer on the website was: “The flame is always lit. Sometimes it is difficult to see during the day.”

But when we had sat by the flame, the sun was setting and the flame definitely wasn’t lit. 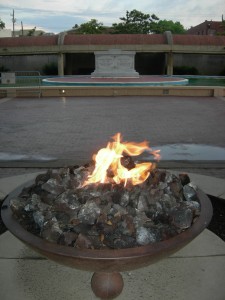 I then decided to email my friend Isaac Farris, who has served as the King Center’s president for the past five years.

He emailed me back to let me know that the eternal flame was indeed the responsibility of the King Center.

“As you may know, the current flame is a result of an upgrade done a year-and-a-half ago, but the technology is new and Atlanta Gas Light is still working through the glitches,” Farris said.

So I shared that info with Somerhalder. The ball was back in his court.

A few days later, I got a voicemail from Eric Greenwood, Atlanta Gas Light’s regional manager for most of Fulton and DeKalb counties.

“Our flame is back glowing wonderfully at the King Center,” Greenwood said, adding that he would be happy to talk about what happened.

Finally, this past Friday, we connected. 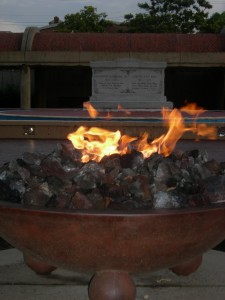 Greenwood said the first eternal flame for MLK was installed in the 1980s, and that over the years, that technology had become a bit antiquated. Last year, Atlanta Gas Light and the King Center had “an opportunity to do something a little more worthy.”

They studied other flame designs, and picked a bigger caldron that would be more dramatic and respectful of the memories of Mr. and Mrs. King.

“We picked one people could see from the street,” Greenwood said. “There’s an electric ignition so the flame will reignite itself.”

The new flame was dedicated on April 4, 2009 on the 41st anniversary of MLK’s death. Greenwood found it especially touching talking to out-of-town visitors who were obviously moved by seeing the crypt, the reflecting pool and the eternal flame.

After hearing that the flame was out, the gas company checked it out and realized that a pilot line needed to be replaced. Efforts were made to reach the vendor, but the company had gone out of business.

“We ordered that part and fixed it,” Greenwood said. “We continue to do daily monitoring.”

He also said the Atlanta Gas Light does cleaning and maintenance on the flame on a quarterly basis.

Then Greenwood said: “We take great pride in the eternal flame.”

And that’s the way it should be.