The Making of a Southerner 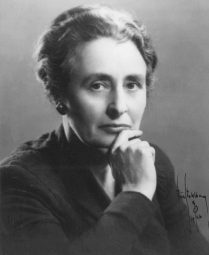 Katharine Du Pre Lumpkin was a scholar who chose an academic career over marriage, and worked to expose society's economic inequities and the effects of racism.

In the previous column, I wrote of Eliza Frances Andrews (1840-1931) of Washington, Georgia, an ambitious science-oriented writer, educator, and thinker who, while acknowledging the inevitability and necessity of the Union in the spirit of Robert E. Lee’s surrender, remained an advocate of white supremacy. In a highly accomplished academic life that straddled the Old South and New South, she remained forever a product and admirer of the antebellum South.

Katharine Du Pre Lumpkin was a scholar who chose an academic career over marriage, and worked to expose society’s economic inequities and the effects of racism.

Then there is Katharine Du Pre Lumpkin, in some ways an almost mirror image of Andrews, though of a later generation (1897-1988). Like that of Andrews, Lumpkin’s heritage extends back to Georgia’s antebellum planter elite, and includes a governor, judge, state supreme court justice, and founder of the University of Georgia Law School (not to mention a county named in honor of her family). The Lumpkin family in fact knew the Andrews family, which lived in the next county over.

The Lumpkins also contributed sons to the Confederacy’s war effort, and like their planter neighbors, experienced the war’s aftermath as a personal and economic catastrophe.

Lumpkin and Andrews were alike in other ways: both valued education, and both chose an academic career over marriage, a radical alternative in their own day. And both excelled as scholars — rarities among women at the time.

And there is this astounding fact: both became avowed Socialists who rebelled against capitalism’s treatment of workers.

In one important way, Andrews and Lumpkin are not alike: If Andrews was an ardent defender of white supremacy, for Lumpkin, white supremacy became the burden of her life, a southern inheritance that she devoted a career to uprooting. Can we explain their different turns at this “Y” in the road? 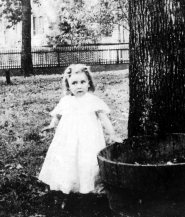 Lumpkin at age two in Gainesville. She grew up hearing tales of the “old times” before the Civil War, and was surrounded by proponents of Lost Cause mythology. Yet she was haunted by the memory of a violent episode she witnessed as a child. Later, she challenged the beliefs of her family and society.

Let’s look more closely at Lumpkin’s childhood and early adult years, which Lumpkin wrote about in The Making of a Southerner, part family history, part autobiography, and part sociological study. According to New Georgia Encyclopedia author Scott Romine, it “describes Lumpkin’s transition from passive inheritance of white supremacy to conscious rejection of the racial values of a segregated South.”

Her father, William Lumpkin, served in the Confederate army. After the war, he married, scraping and scrambling for a living as a lawyer and farmer — as did so many other sons and daughters of the old planter elite. The family moved several times during her childhood, as her father pursued work and opportunities.

Lumpkin enjoyed regaling his children with tales of the “old times” on the family plantation. “Tell us another story about the old days, Pa,” the children would ask. And well they might, for the stories he relayed were filled with peace, prosperity, and happy times, even for slaves, who were bound to the master and his family (so the story went) not by chains, but by ties of loyalty and affection.

William Lumpkin’s stories of that bygone era in fact merged perfectly with the day’s rising Lost Cause mythology that also swept up Andrews. Indeed, William Lumpkin was among its earliest and best-known proponents and his children, like so many other white children across the South, an enthusiastic audience.

Then one day a crack in this picture showed itself. 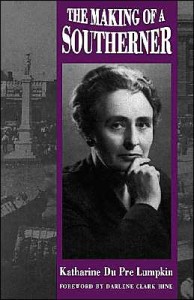 Lumpkin’s book The Making of a Southerner, published by the University of Georgia Press, is part family history, part autobiography, and part sociological study.

In The Making of a Southerner, Katharine Lumpkin remembers as a young child having “gone aimlessly out into the yard before breakfast” one morning when, “Of a sudden in the house there was bedlam — sounds to make my heart pound and my hair prickle at the roots. Calls and screams were interposed with blow upon blow.”

Peeking through the kitchen window, she saw her father with a stick beating “our little black cook, a woman small in stature.” Her face was “distorted with fear and agony” and her father’s face was marked by “stern rage.” It was not a face she recognized. “Having seen and heard, I chose the better part of stuffing my fists in my ears and creeping away on trembling legs.”

How searing that experience was for Lumpkin, not only in the shock of the moment, but in the seed it sowed.

Her mother, Annette Caroline Morris Lumpkin, who before marriage was an educator, watered that seed by her teaching. Possessing a keen intellect, Annette Lumpkin was described by Katharine as the “family’s prized possession.” In that relationship came encouragement for the development of Lumpkin’s mind and the freedom to read, think, and converse.

After graduation from Brenau College in Gainesville, Lumpkin worked for the YWCA, where she learned of the Social Gospel movement that applied Christian ethics to social concerns, including also those of African Americans in the South. It was the dawn of another awakening.

Pursuing this area of interest — work and equity — she attended Columbia University in New York, receiving an M.A., and the University of Wisconsin, where she received a Ph.D. in sociology. Her specialty was the new field of “industrial relations,” with a focus on wages, hours, and working conditions for child and adult workers in agriculture, factories, and mills.

In the course of her academic career she wrote and published on that subject — the brunt of which exposed society’s economic inequities and the effects of racism. She also wrote a biography of the great nineteenth-century reformer and feminist, Angelina Grimke.

What do we make of these two southern stories — Andrews and Lumpkin, so much alike in their origins, yet ultimately so different in their conclusions about society?

It has been said that the South is a nation unto itself: its agonies and glories, its depths and heights, would seem to plumb the vast ocean of human experience. Certainly the region’s literature and music, stories and art, visionaries and reformers reflect this amazing diversity of experience.

And consider this list of southern-born presidents (there are others), hardly cookie-cutter images of one another: Washington, Jefferson, Jackson, Lincoln, Wilson, Truman, Johnson, Carter, and Clinton.

Diversity in all its multitudes is the stated, and sometimes unstated, truth of life in the South, and Lumpkin’s own family is exhibit A: one of her sisters actively supported the Communist Party in the 1930s, while the other picked up their father’s mantle to become a lifelong devotee and teacher of Lost Cause mythology.

What can we learn from these stories? James Baldwin, a southerner by heritage and the grandson of a slave, believed that “people are trapped in history, and history is trapped in them.” How formative is place in our journey to adulthood? How significant are the subtle (and not so subtle) influences of parents and community, not to mention traumatic events of the kind Lumpkin herself witnessed at a tender age? And what of our educational experiences? Lumpkin’s experience at Brenau and later, Columbia University, widened her exposure.

What will future generations say about our choices as individuals? What lens will they use to judge our behavior, our priorities?